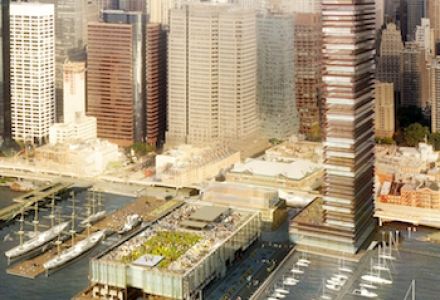 Howard Hughes Corp unveiled preliminary plans (rendered by Shop Architects) for further redevelopment of the South Street Seaport district, including a new marina, a seven-day-a-week food market, restoration and raising out of the flood plain of the historic Tin Building, replacement of decayed wooden platform piers next to Pier 17, and the biggie: a mixed-use tower to finance infrastructure and restoration expenses. Zoning allows a 350-foot tall, 100-foot wide tower, but HHC is proposed a taller, slimmer, 670k SF building. The final proposal likely will include a plan to make sure the Seaport Museum and tall ships stick around. HHC plans to begin the Landmarks and ULURP process in early 2014.

Silverstein Properties broke ground today on an 82-story with a Four Seasons (157 residences, 185 hotel rooms, and a restaurant) and a public plaza at the $1B 30 Park Place and Church Street. It'll deliver in 2016.

InterContinental Hotels acquired a development site four blocks from Barclays Center at Nevins and Schermerhorn and will build one of its fifth fitness-focused Even Hotel, an 83k SF, 204-room property that will open in mid-2015 at the same time as two on Manhattan's West 35th and East 44th Streets.

Kasowitz Benson Torres (repped by Prudential Douglas Elliman's Howard Lorber and NGKF's Moshe Sukenik and Mark Weiss) renewed 225k SF in The Paramount Group's 1633 Broadway for 20 years. It has occupied the 20th through 24th floors since 2000 and will retool its space and tech and eventually occupy the 19th through 23rd. 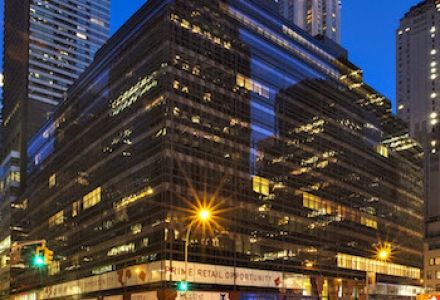 Brookfield acquired One North End Ave, the New York Mercantile Exchange HQ, for $200M, making it an official rather than unofficial part of Brookfield Place. NYMEX has leased 449k SF for two years and then will consolidate into 222k SF for 13 years, freeing up the upper half for lease.

American Realty Capital New York Recovery REIT bought its first hotel, acquiring the leasehold interest in the 240-key Viceroy New York, which opened in October on 57th between Sixth and Seventh, for $148.5M.

Silverstone Property Group sold 143-145 W 4th St for $19.2M. The company purchased it in August 2012 for $11.3M and has renovated and reconfigured the units. Marcus & Millichap's Peter Von Der Ahe and Joe Koicim arranged the deal.

SL Green and Jeff Sutton bought out Juicy Couture's lease at 650 Fifth Ave so they can combine the retailer's basement, street-level, and second floor with vacant space on the third floor. That makes a 30k SF block available.

Nine months after extending Macy's for 646k SF of office at 11 Penn Plaza, Vornado has completed a seven-year, $450M refi of the 1.1M SF property.