The rise of the luxury condo market has made way for DC Partners' biggest project yet. The Allen will tout a Thompson Hotel, retail and office along the Allen Parkway, but perhaps most notable is the residential component — high-end condos, something still not attempted often in Houston. The condo market has benefited from an increase in competition among condo projects in Houston, said Azuike, who is speaking at Bisnow's Multifamily Annual Conference Houston Oct. 3. When DC Partners began to develop The Astoria in 2013, there was just one other condominium development underway.

The lack of comps in the market made lenders wary of the viability of condos in Houston, especially local banks that had little to no experience financing condos. Houstonians have been slow to embrace condo living compared to other major markets like New York and Chicago.

Azuike said it took a while to find a lender that would take a chance on developing condos in Houston. New York-based Centennial Property Finance financed The Astoria, which was completely sold out before construction wrapped up.

The success of The Astoria provided the momentum for more condo expansion. In 2015, DC Partners and Centennial Property Finance came together again to build The Arabella, a luxury 500K SF condominium in the River Oaks District. The 33-story tower opened in November and is more than 85% sold. Randall Davis was a partner on The Astoria and The Arabella.

The price tag for The Allen will exceed $500M. DC Partners is finalizing construction financing for The Allen, which includes capital partner Tianqing Real Estate Development LLC. Azuike expects to partner with an out-of-state lender but notes Texas banks are becoming more familiar with condo development in Houston.

While it can be difficult to get an accurate number of sales due to only a limited number of condos being listed on the platform, HAR board member and 30-year Realtor Tim Surratt said the condo and townhome sales have picked up this summer.

The Allen will be a game-changer for the Allen Parkway corridor, which has a void in hotels and mixed-use product, Surratt said.

Other projects are on the way to continue the transformation of Allen Parkway. For example, city documents outlined plans for Houston-based apartment developer Hanover Co. and Ziegler Cooper Architects to construct a four-building residential complex near Shepherd and Allen Parkway, according to the Houston Chronicle. The project includes a 23-story tower overlooking the bayou, a 21-story office building and a hotel.

"Redeveloping is occurring on each side of the Allen Parkway from River Oaks to Downtown," Surratt said. Courtesy of DC Partners
An aerial rendering of The Allen, the 6-acre mixed-use development along the Allen Parkway, Houston

The focus on amenities is a major selling point of The Allen, Azuike said. Phase 1 will include the lifestyle pavilion and the 35-story hotel-condo building, which will break ground in the coming months, Azuike said. The four-story lifestyle pavilion will feature an exclusive fitness brand, restaurants and other retail. In its first Houston-based project, the Thompson Hotel will take floors one to 14.

This represents the second time DC Partners has partnered with Thompson Hotel, which was acquired by Hyatt earlier this year. The duo is constructing The ARTS Residences at the Thompson San Antonio. The hotel-condo project is expected to top out next month and is 75% sold.

The Residence at the Allen will occupy floors 15 to 35. The units will range from 930 SF to 10K SF. The residential portion will feature 17 penthouse units, a resident-only amenity level with a catering kitchen, an outdoor deck with an endless pool machine and unit upgrades such as a spacious balcony with an in-ground pool, sky gardens and outdoor kitchens.

The multiphase project also includes two office buildings and a multifamily tower, which will provide a more affordable residential option within the 6-acre site. Azuike said he recognizes a need to provide housing options across a range of price points for the stability of the overall residential market.

Situated at 1711 Allen Parkway, The Allen overlooks Downtown and the Buffalo Bayou Park. The city has $58M plans to renovate and improve the park, including expanding the bike and hike trails and the entertainment programming.

"The Allen is at the crossroad of every major neighborhood in Houston," DC Partners Sales and Marketing Director Julie Kleine said. 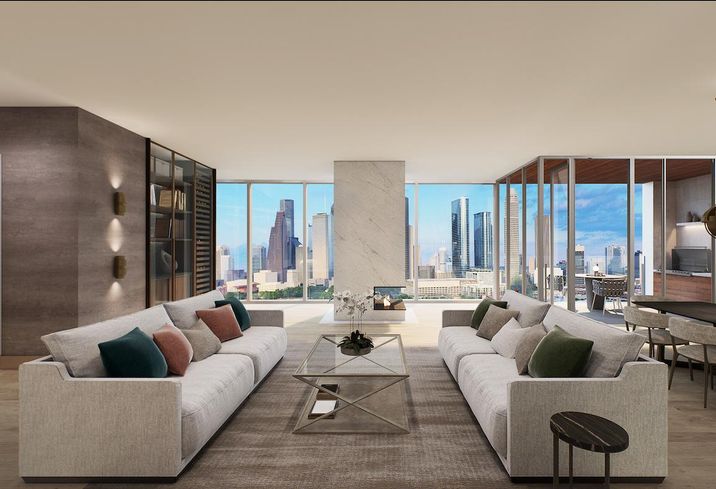 Part of the demand for The Allen — and for all Houston condos — is the increase of suburban homeowners looking to downsize.

"Houston has a lot of sprawl and there is a trend of people moving back into the city," he said.

That demographic drives some of The Allen's design choices. DC Partners has found that its target market, empty nesters, are looking for a lock-and-leave community. They want to keep what they love about their homes such as large master bedrooms and spacious closets while embracing a low-maintenance lifestyle.

High-rise developers are also adjusting floor plans and amenities to accommodate residents, such as building in porch potties for dogs and larger walls to display art. Residents will also have access to all of the hospitality amenities, such as 24-hour room services and lodging discounts.

"That is going to be a huge plus for us," Azuike said.