Coworking has been growing exponentially in D.C., with new deals signed nearly every month so far in 2018. The heads of several coworking companies say they are not slowing down their growth any time soon, and experts predict the market could continue to explode for the foreseeable future. 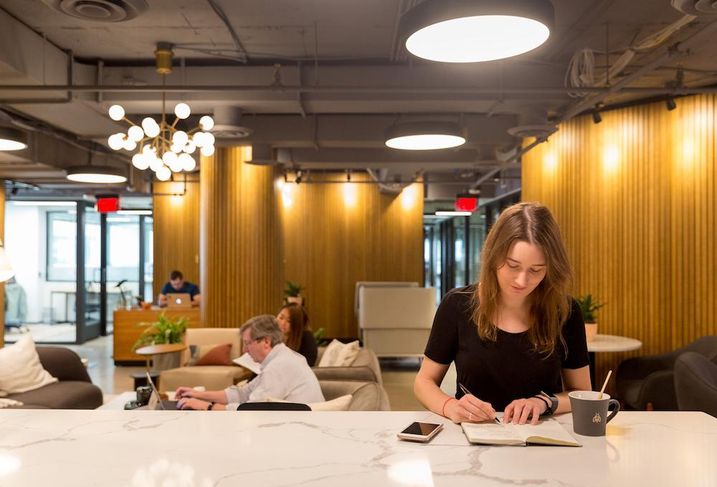 "We've done an analysis of the D.C. market and I think there's a long runway for growth," said Industrious CEO Jamie Hodari, who will speak at Bisnow's Greater Washington State of Office event Sept. 26. "Our intent is definitely to continue growing both within the city and its surrounding community."

Industrious has signed leases for three D.C.-area coworking spaces in the last year and Hodari said it hopes to grow to eight locations in the region by the end of 2019. It is one of at least nine coworking providers that have expanded in D.C. this year, a trend that is driving the market's office demand at a time when D.C.'s established office occupiers continue to shrink.

The coworking sector has accounted for over 400K SF of D.C.-area leases so far in 2018, according to JLL Director of U.S. Office Research Scott Homa, accounting for roughly 20% of the overall market's occupancy gain. Coworking leader WeWork has quickly become the largest private office tenant in D.C. with over 600K SF leased. 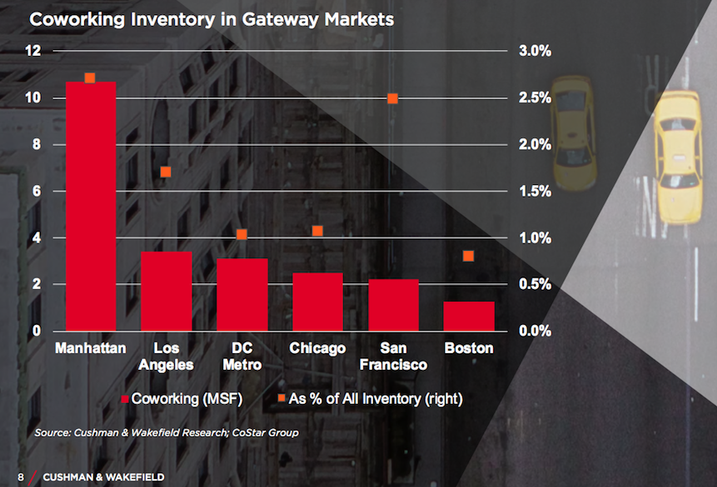 Courtesy: Cushman & Wakefield
A graph showing the amount of coworking space as a percentage of overall office inventory in the top six U.S. markets

The D.C.'s Metro area currently has about 3.1M SF of coworking space, according to Cushman & Wakefield's 2018 coworking report, comprising just over 1% of the region's total office inventory. Cushman & Wakefield projects coworking's share of the market in gateway cities like D.C. could triple over the next decade.

The rapid-fire string of D.C. coworking expansions in 2018 have made headlines every month as companies race to grow their footprints in the city. Here is a timeline of the coworking sector's rapid expansion in D.C. this year:

May: Industrious signed a 28K SF lease at 7200 Wisconsin Ave. in Bethesda.

June: Industrious signed on for 25K SF at 4201 Wilson Blvd. in Ballston. 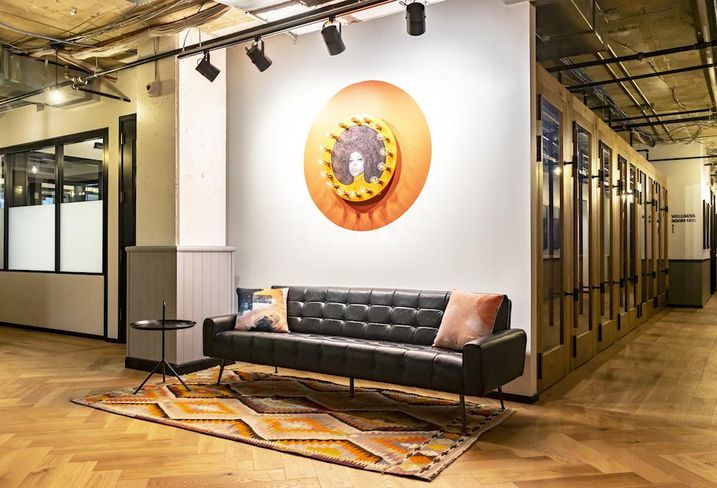 Courtesy: Mindspace
The inside of Mindspace's first D.C. location at One Franklin Square

Executives at four of these coworking companies said they are drawn to D.C. for a number of reasons: the highly educated workforce, the presence of several strong universities, the combination of a growing startup scene and many existing big corporations, the large population of millennials and the availability of unique buildings in quality locations.

But the executives say they are not blind to the huge amount of competition they have for signing up coworking members.

Israeli coworking provider Mindspace picked D.C. for its first U.S. location, which opened on K Street last month. Mindspace Vice President of Real Estate Itay Banayan said its spaces in some other cities have had 100% occupancy at the time of opening, but it knew that was unlikely to be the case for D.C.

"We came very much with open eyes to the D.C. market and are aware of the amount of supply and trends in the city; we know that space in D.C. moves a little slower than in some other markets we're in," Banayan said. "In our D.C. business plan, we gave ourselves more grace than other cities. So far we're doing a little better than the business plan."

Banayan said Mindspace likes to open multiple locations in every city it enters to leverage the staff and brand awareness from the first space. He said he eventually expects Mindspace will open five or six D.C. locations and is looking at the Central Business District, East End and some of the more residential areas directly to the north between Dupont Circle and Logan Circle. 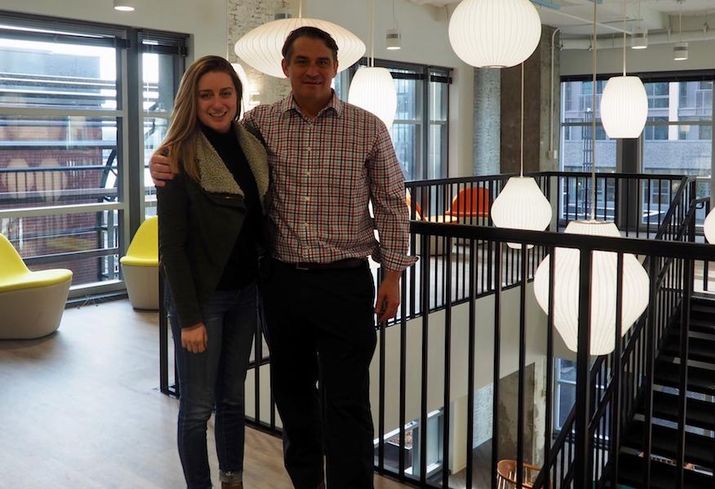 MakeOffices, a D.C.-based coworking company founded in 2011, now has nine D.C.-area locations with its 10th in the works. MakeOffices CEO Zach Wade said the surge of new entrants to the market has not hurt the company's ability to fill up its new spaces. He said MakeOffices revenue has grown an average of 3.5% per month this year. The company has booked about 300 tours per month across its D.C.-area locations, and over 60 of those are converted to new members every month.

Most of this demand is new companies entering the coworking market that previously had a traditional lease or small home office, Wade said, and that is growing the overall demand pool to allow more spaces to open.

"A very small percentage of those are coming from other coworking companies, that's the mind-blower," Wade said. "We have yet to start feeding off ourselves as an industry."

The rising demand for coworking has been driven by a fundamental shift in the types of companies that use the space, Homa said. Coworking space had previously been filled with startup companies and individual entrepreneurs, but now he sees corporate America moving in. JLL has conducted focus group surveys with representatives of large corporations and has identified a growing appetite for flexible space and short-term leases.

"Increasingly the amount of corporate businesses are driving membership and occupancy within coworking centers," Homa said. "I think we're in only the first or second inning in terms of adoption of these spaces by larger users. You have a very deep pool of potential demand coming from that segment."

He expects that growing corporate demand to help fill the massive supply of new coworking spaces opening in D.C. and other major U.S. cities. Coworking companies so far have largely been successful in filling spaces and it is very rare for one to close, Homa said, a trend that is is making them more attractive tenants to landlords.

"We're seeing exponential growth of the sector right now," Homa said of coworking. "So much of that is driven by the enormous flow of capital into the sector as well as the growing comfortability that owners are feeling with exposure to this segment. As long as capital flows continue to support the business in a big way, we expect this to be a seismic shift in consumption."

The coworking market has largely blossomed during the record-long economic expansion, and the sector has not yet had to weather a recession. The coworking business model could be particularly susceptible to economic downturns because of the ability of companies to back out of their short-term leases to cut costs, but the heads of coworking companies are not too worried. 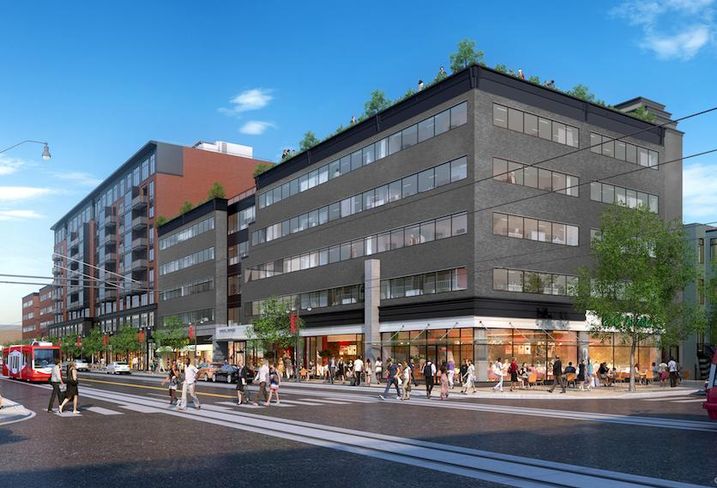 "Obviously, it's a concern if businesses stop opening up and startups stop raising money," said Bond Collective Managing Director Gregg Jackowitz, whose company is opening its first D.C. coworking space on H Street and plans to open additional locations. "That's a concern for everyone, but not as much as people think because as a recession happens, people don't have the cash to sign up for traditional leases with security deposits, so coworking is a better option for them."

In addition to larger companies choosing coworking instead of signing long-term commitments during a recession, Wade said small businesses and entrepreneurs could seek out coworking spaces to help them generate new business through networking.

"I'm not saying it will be better, because a recession is a recession," Wade said. "But I think it's a detriment to business when you move into a home office. Losing the connections and engagement, the types of things you need more of in a downturn, is a huge detriment. The cost of real estate is not the biggest line item, so I'm not worried about smaller groups."

Cushman & Wakefield studied the performance of Regus, the oldest flexible workspace provider, during the Great Recession and found that the company's U.S. occupancy rate declined by just 5.5% and rebounded to above pre-recession levels by 2011. The revenue coworking companies are bringing in today should allow them to survive occupancy declines of that level, Homa said.

"You have certain providers that have become very savvy in building out space in a very efficient way that they're creating economies of scale," Homa said. "They have operating margins within each location that result in those locations being solvent even if occupancy were to drop by 10 to 15%, which is really meaningful."

Hodari, Wade and other industry leaders will speak on a coworking panel at Bisnow's Greater Washington State of Office, Sept. 26 at 600 Massachusetts Ave. NW.