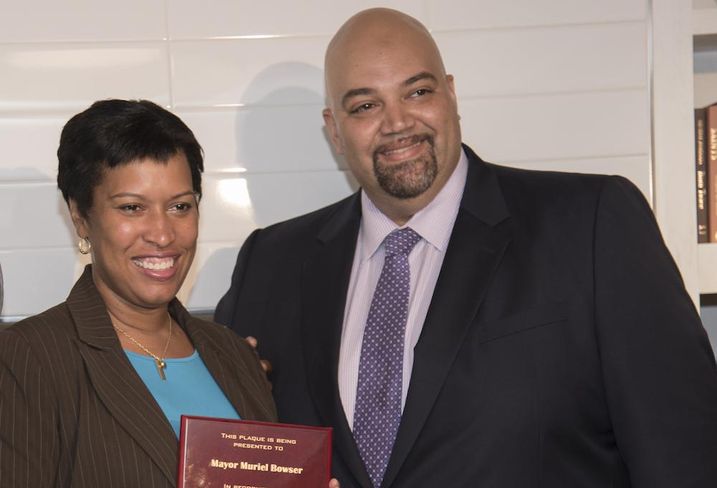 Bo Menkiti poses with Mayor Muriel Bowser at a 2016 ribbon-cutting.

Menkiti Group founder and CEO Bo Menkiti works in Northeast DC's Brookland neighborhood and lived there for 10 years. He has developed several small projects in the area and has planned a 200-unit mixed-use project near the Brookland Metro station that remains stalled after a court vacated its zoning approval last year.

Bisnow: You have had an up-close view of Brookland's transformation, how has the neighborhood changed over the last decade?

Menkiti: The neighborhood has changed a lot in the last 10 years, and in many ways it has stayed the same. I always think of Brookland as having three areas of change. Around the Metro stations, Brookland-Catholic University, and also Rhode Island Avenue, you have this land where there are opportunities for significant change and large-scale new development at the Metro stations. Then you have the spine of 12th Street and the change along 12th is a little more gradual, but you start to see development and movement. And then you have residential neighborhoods where you’ve had home restorations, but the overall character of those neighborhoods hasn’t changed a lot.

If you think about it and look at what’s changed a lot over the last 10 years, the delivery of the Monroe Street Market project at the Metro made a significant mark on the area between Catholic University’s campus and the Metro station. It also brought much-needed new retail and restaurants to the area. You’ve seen new restaurants open and have success along 12th Street, which has been really exciting.

Bisnow: What's the latest on your 901 Monroe project? A year ago a DC court overturned your PUD approval. What has happened in the last year?

Menkiti: We remain committed to making the project happen. What you have is the Brookland Small Area Plan, which was a community process and any principle of transit-oriented development or smart growth would indicate that there’s a need for density on that site. A building was designed with a tremendous amount of input from the neighborhood on how to make that a high-quality building that was designed to be extremely respectful and deferential to the different types of housing around it. So we’re 100% committed to staying the course and getting something built there.

At the end of the day, what that is will depend a lot on how the process moves forward. You’re across the street from a Metro station. It is not a good thing for the District of Columbia, residents of the neighborhood or anybody for it to sit there as an empty site. So I think it’s kind of an example of when a broken process ends up hurting the whole community. But I think it’s something that will get fixed. It has to get fixed because the future of our city depends on it. We’re going to continue to work and there’s a number of different micro and macro solutions moving forward.

Bisnow: Do you have other projects you are working on or have recently completed in Brookland and the surrounding area?

Menkiti: Not too long ago we delivered the Girard Street Senior Apartments at 16th and Girard, which was an affordable senior project. We were hearing from a lot of folks in the neighborhood that there were a number of seniors that really wanted to age in place in the neighborhood, and it was getting harder and harder for them to live in large detached homes, and they wanted to have a place where they can stay in the neighborhood. That’s how that project came about. We were also able to partner with Miriam's Kitchen, so 11 of those units were set aside for folks who were formerly homeless and Miriam’s Kitchen is working with them to help them get back on their feet, which is great.

We recently built our headquarters here. We took an old printing press by the tracks and redid that into what’s now our office, Annie’s Ace Hardware and Excel Pilates on Eighth Street. That’s been an exciting project to be able to bring some of that retail and energy and for us to be able to stay and grow in the neighborhood. We were really committed to trying to keep our HQ here as our business grew, and it has given us space to be able to do that.

We also did a 21-unit condominium building back in 2008 and we have a number of small properties along 12th Street that over the years we’ve bought and developed, everything from restaurants to shared office space. 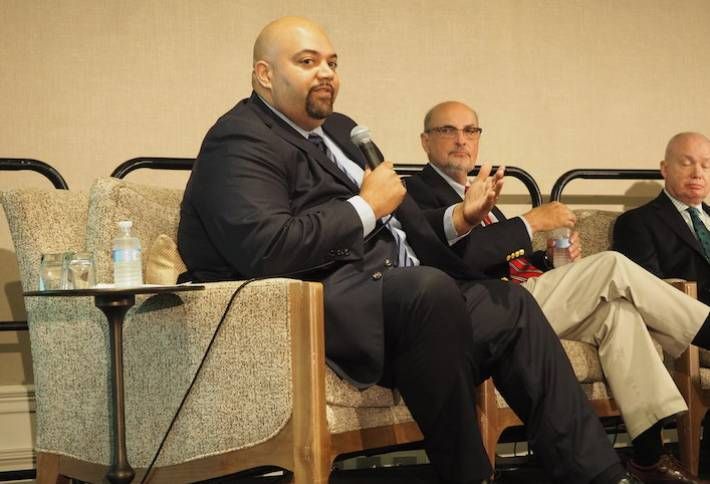 Bisnow: Do you have anything else planned for the neighborhood in the future?

Menkiti: We have a couple of projects that are in the planning stage now. We are working on another project along 12th Street that will be a small retail and office project, about 4K SF. We’re starting construction on a flex warehouse/office project in Woodridge on Evarts Street. We are just about to finish, just across the border in Mount Rainier, we partnered with the Prince George’s County redevelopment authority to redo a historic block of buildings right on the circle across from the line with DC. That’s 11K SF of retail and some apartments. It’s going to deliver in July.

Bisnow: Beyond the Brookland area, what other parts of Northeast DC appeal to you as areas for future development?

Menkiti: We did a project called the Metropolitan Overlook in Eckington. That’s a 37-unit condo building we delivered in 2014. We’ve had an opportunity to look at a number of projects in Eckington and work with developers who are working on large projects there and support some of the work they’re doing so we’re definitely interested in that neighborhood. We’ve done work in Woodridge in terms of residential homes and we have a number of projects along Rhode Island Avenue as you head out toward Mount Rainier. That Woodridge Rhode Island Avenue corridor has been an area that we really like and are excited about the character of that commercial strip and what that could become.

When you think about Northeast as a whole, you kind of have where Bloomingdale crosses over into Eckington and everything that’s going on down there is sort of an outgrowth of Shaw. You have Eckington coming up through everything that’s happening with MRP at the Rhode Island Ave Metro station. You’ve got Brookland Manor and MidCity’s project there. As you head out on Rhode Island Ave, you head toward Mount Rainier and get up toward Hyattsville. So I think there’s this continuation of that Route 1 Rhode Island Avenue corridor as it moves out to College Park. Another area that has a lot going on right now too is Fort Totten. You’re starting to see a lot of activity with the development of Walmart and the Cafritz project. There’s a lot of larger stuff happening around the Metro station that’s having a ripple effect on the renovations of homes in some of the more residential communities around that area.