The development boom D.C. has experienced over the last several years is continuing during the pandemic, with dozens of under-construction projects still moving forward.

Mayor Muriel Bowser allowed construction to continue in the city during the stay-at-home order she issued March 30, a course also taken by the governors of Maryland and Virginia. 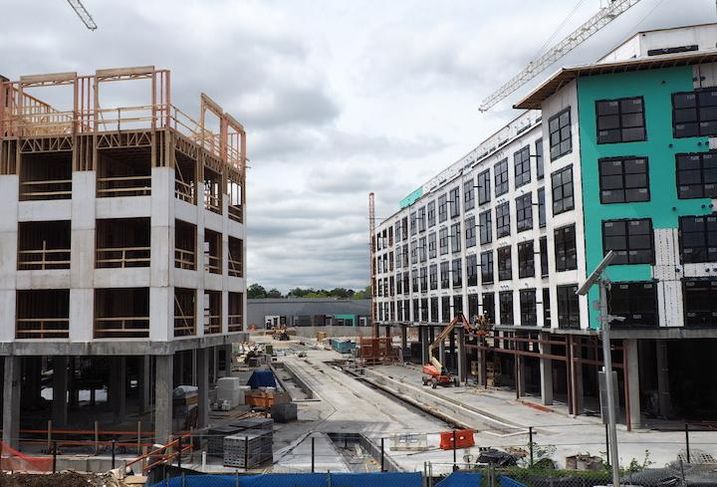 On the site of the former Rhode Island Avenue Shopping Center, MRP Realty broke ground last year on its Bryant Street project. The development's first phase is slated to include 487 multifamily units, an Alamo Drafthouse Cinema and 35K SF of additional retail.

MRP brought on FRP Development Corp. as a partner on the project, using the capital gains from a prior sale to finance Bryant Street through the opportunity zone program. The project also included a $24M tax increment financing package from the District and a loan from Capital One.

The development team updated the community on its progress in a virtual meeting last week, saying the first residential building will open this fall and the Alamo Drafthouse will open next year, independent journalist Gordan Chaffin reported. 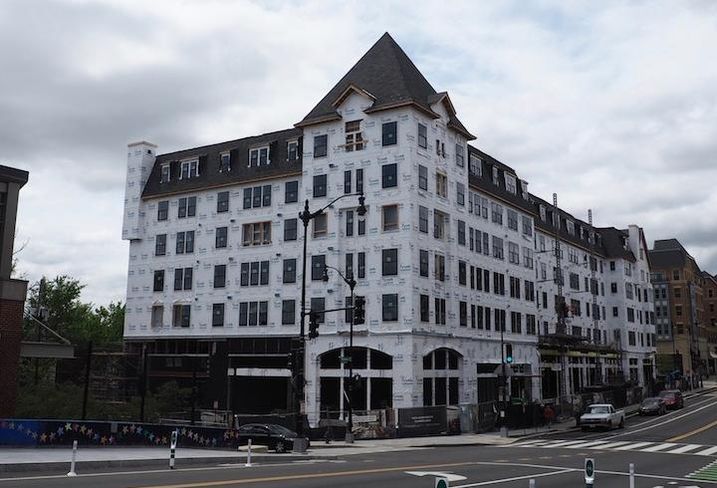 Bisnow/Jon Banister
The final phase of Monroe Street Market under construction in Brookland.

Construction began on the final phase of Brookland's five-building Monroe Street Market development in late 2018. Pritzker Realty Group is leading the final phase, with Bozzuto Construction as general contractor, and it received a loan from JPMorgan Chase.

The building at the corner of Eighth and Monroe streets NE is slated to include 156 apartments and 16K SF of retail, where the developer has been working to land a small grocer. Pritzker Vice President Bill Dvorak told Bisnow in 2018 the project would be completed by summer 2020, and signs in front of the building advertise that same timeline. 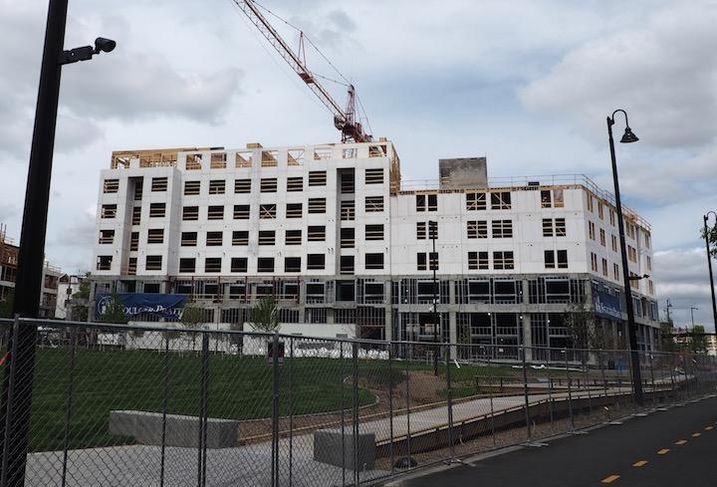 Bisnow/Jon Banister
The Eckington Park development next to the fenced-off Tanner Park along the Metropolitan Branch Trail.

Foulger-Pratt broke ground in May on Eckington Park, a 327-unit project with 9K SF of retail at 1501 Harry Thomas Way in Eckington. The project sits along the Metropolitan Branch Trail and adjacent to the new 2-acre Alethia Tanner Park created by the NoMa Parks Foundation.

The park was slated to open early this year, but it remains mostly fenced off because of the coronavirus. Seating areas have opened on either side of the park, and a walkway has opened connecting the park and Harry Thomas Way, but the dog park, children's playground and large green space remain closed. 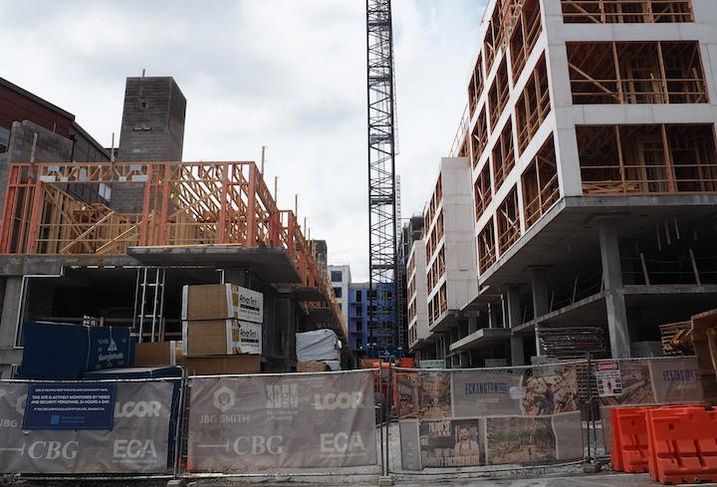 Across the street from Eckington Park, construction began in 2018 on the Eckington Yards development. A legacy JBG fund that was not folded into the JBG Smith REIT is building the project, and LCOR in 2018 bought a 50% stake in the development.

The project is planned to include 681 units, a 35K SF Brooklyn Boulders rock climbing gym, a 23K SF commercial kitchen and 3K SF grocery store from Union Kitchen, plus additional retail. The retail will be centered around a woonerf-style shared street.

The team said in 2018 the project was scheduled to deliver in Q3 2021. CBG Building Co. in January held a topping out celebration to mark the completion of the vertical phase of construction. 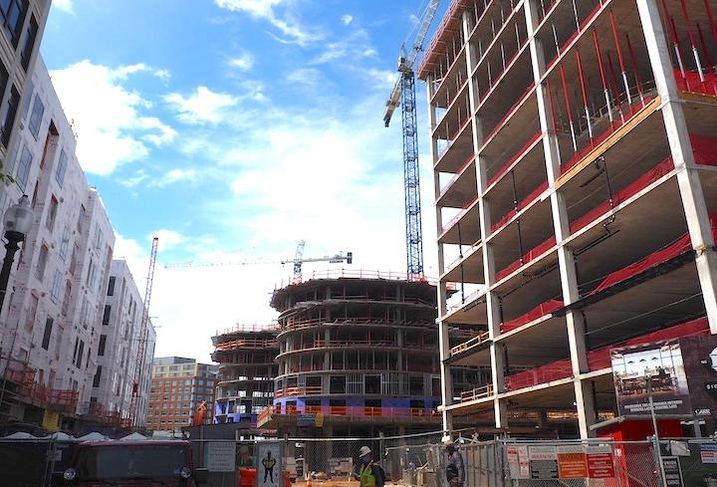 Construction began last year on the 1.25M SF Market Terminal development. The project sits to the west of Union Market, in between Fourth Street NE and the train tracks. 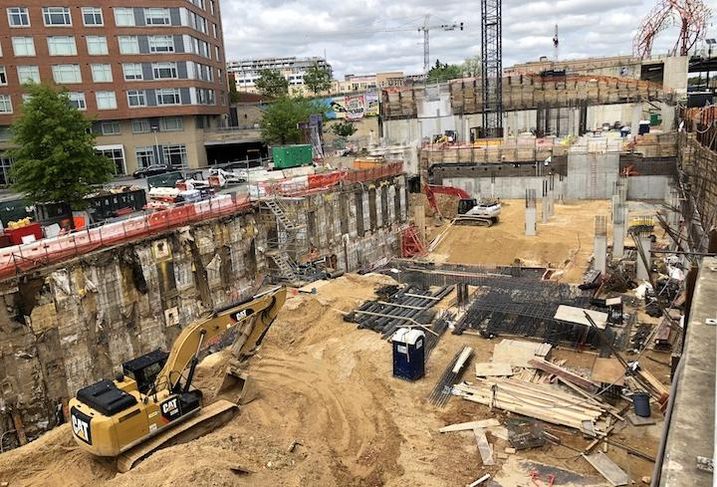 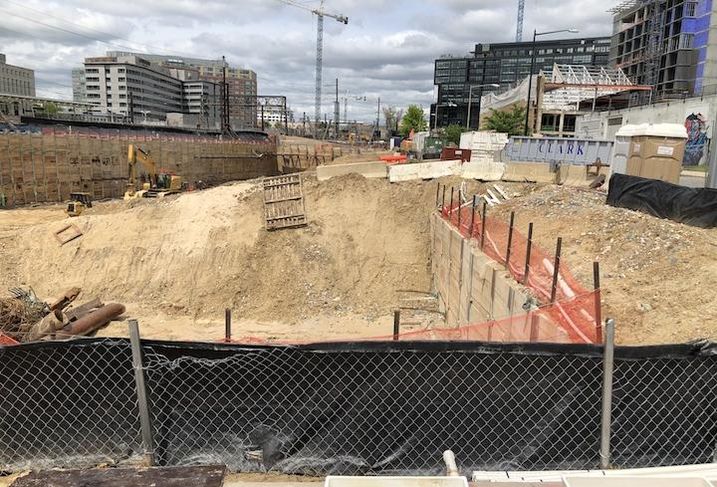 Trammell Crow subsidiary High Street Residential in September began construction on Armature Works, its three-building project on Third Street NE in NoMa. The project is a partnership with KochSmith Capital, MetLife and the family that owns Central Armature Works.

The development is planned to include two apartment buildings with 468 and 172 units, with the latter having previously been planned as condos. The developer in 2018 reached a deal to bring the James Hotel brand to its planned 204-room hotel, but the development team pulled out of the deal last year after MetLife joined, and it is has not announced another hotel brand. 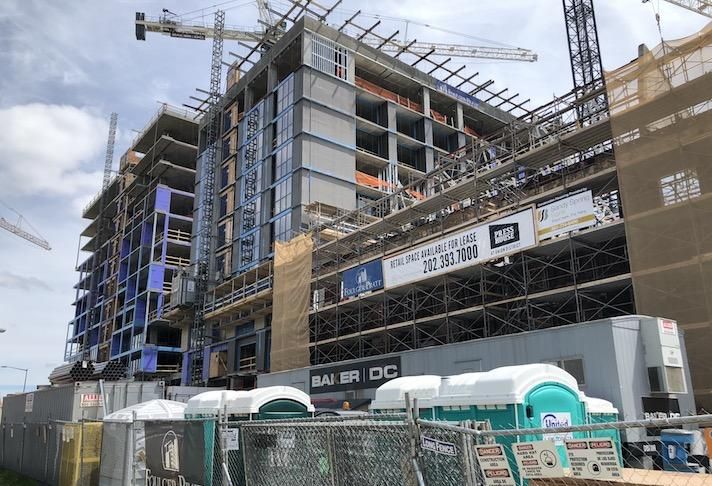 Across Third Street from Armature Works, Foulger-Pratt began construction in April 2019 on its three-building Press House at Union District project. The development is preserving the historic National Capital Press building on the corner of Third and N streets, with plans to renovate and lease the structure as retail and office.

Next to the historic building, the developer is building two new apartment buildings totaling 356 units. The project has another 85K SF planned in a later phase, with the option to build residential or hotel space. 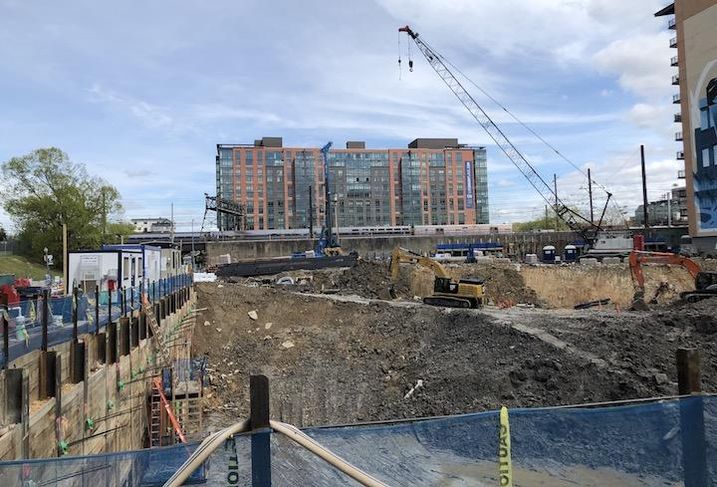 The long-planned Storey Park development in NoMa began construction in December. Perseus TDC is partnering with Four Points and the Buccini Pollin Group on the project.

At the corner of First and L streets NE, Storey Park is slated to include about 500 residential units, a 235-room hotel, for which Marriott signed on as the flag, and 40K SF of retail. It is expected to deliver in late 2022. 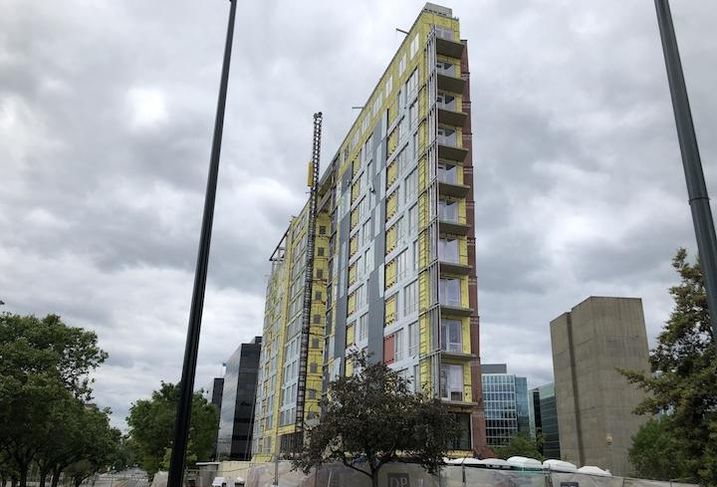 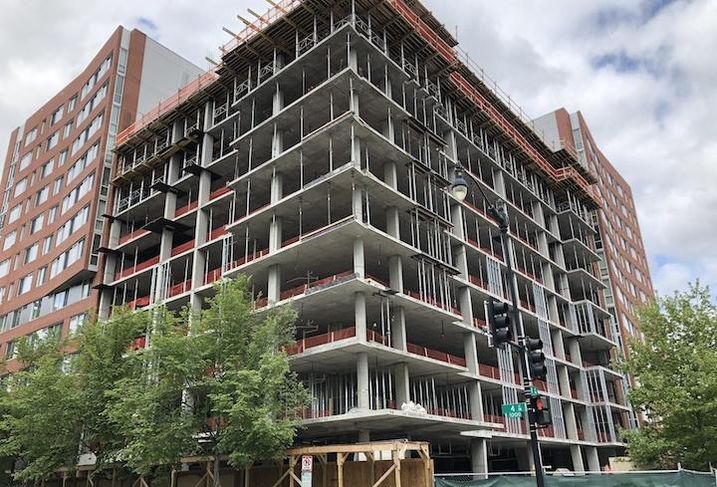 At the corner of Fourth and K streets NW in Mount Vernon Triangle, construction began last year on a 247-room hotel project. The developer, Habte Sequar, brought on Holiday Inn Express as the flag and received construction financing from Stonehill Strategic Capital.

The hotel project sits on the site of the former Henry's Soul Cafe, about four blocks from the Walter E. Washington Convention Center. The developer said in May 2019 it expected to complete the project in late 2020. 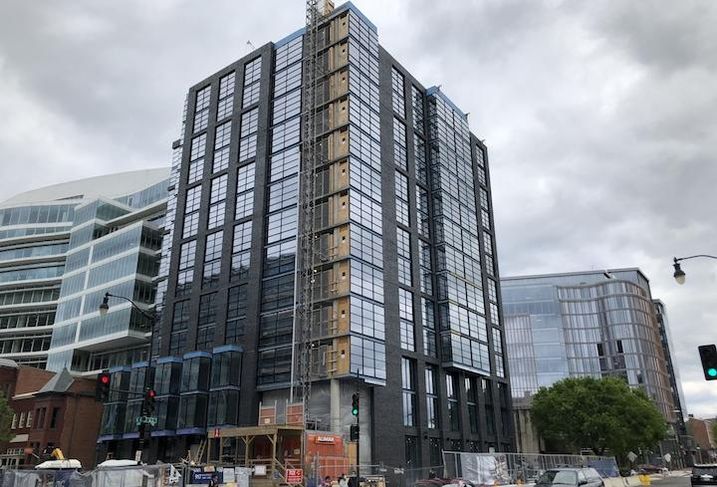 Two blocks from the convention center, Douglas Development broke ground early last year on an AC Hotel by Marriott, the brand's first location in the District.

The 234-room hotel at 601 K St. NW is planned to include a ground-floor restaurant, a lower-level lounge and a rooftop bar. Douglas said last year it expected to complete the project in November 2020, the Washington Business Journal reported. 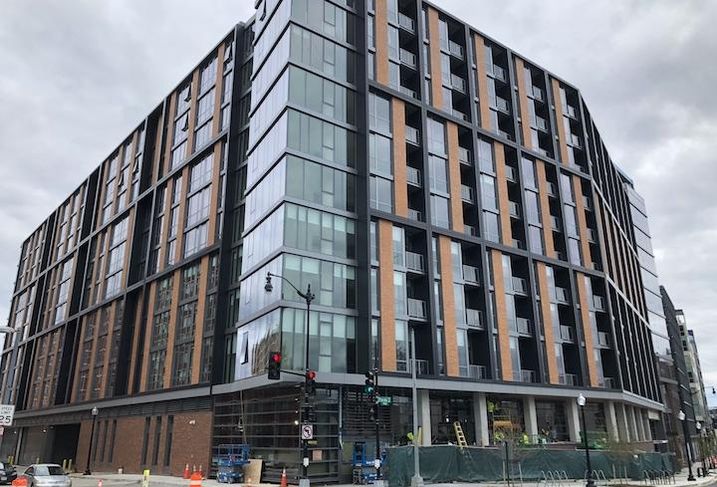 In Shaw, MRP and JBG Smith are nearing completion on The Wren, a 433-unit project anchored by Whole Foods. The team broke ground in November 2017 on the project at 965 Florida Ave. NW. The grocer is expected to open this summer, MRP told Bisnow in January.

To the south of The Wren, JBG Smith last year completed Parcel C of the Atlantic Plumbing development, consisting of two towers connected by an elevated walkway totaling 256 units. 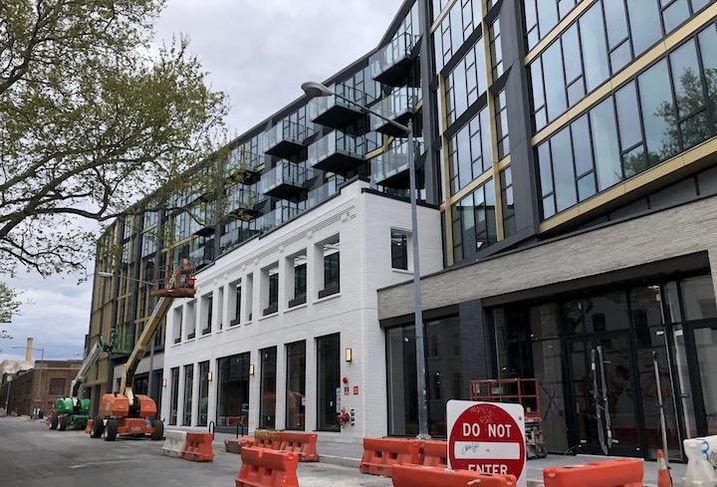 One block south of Atlantic Plumbing, construction began in 2018 on a 132-unit development with ground-floor retail at 2009 Eighth St. NW, branded as J Linea.

The developer, Jefferson Apartment Group, acquired the property in 2016 for $25M. The site was formerly home to the Town Danceboutique nightclub, which closed in 2018 but is planning to reopen in NoMa.