Steppenwolf Theatre Co. broke ground last week on the next phase of its multiyear expansion at 1646 North Halsted St. in Chicago’s Lincoln Park. The company also unveiled plans for its new 50K SF theater building, which it plans to open by summer 2021.

“Steppenwolf is first and foremost a Chicago theatre and that understanding has guided the design of every inch of the building,” Artistic Director Anna Shapiro said in a statement. 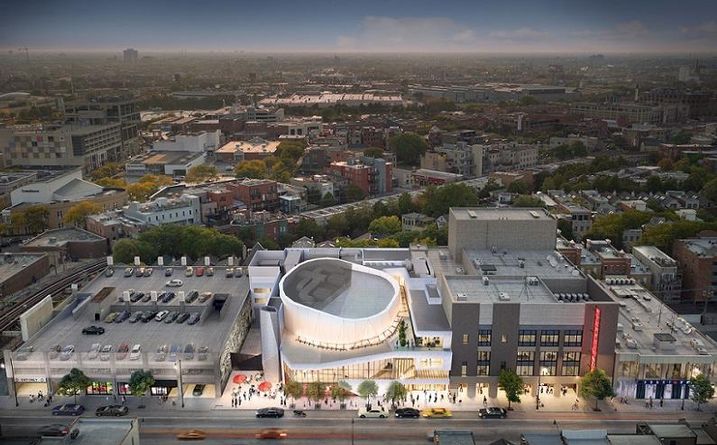 Designed by world-renowned architect Gordon Gill of Adrian Smith + Gordon Gill Architecture, and London-based theater design team Charcoalblue, and built by Chicago-based Norcon Construction, the new facility will feature a 400-seat in-the-round theater only six rows deep — unique in Chicago — that puts the actor at the theater’s center. It will also have a dedicated education floor, an open two-story atrium lobby, a wine bar and a sidewalk lounge, increasing the social gathering spaces.

“Our first-ever purpose-built learning space, which is the crowning jewel of the building, will allow us to place education at the heart of our mission and increase the number of teens impacted by our programming from 15,000 to 40,000,” Executive Director David Schmitz said in a statement.

“Chicago doesn’t have another space like it — in fact Steppenwolf is leading a renewed charge in defining rooms where dialogue and the immediacy of the performers is paramount,” Charcoalblue Senior Partner Gavin Green said.

The new theater building will sit between the existing parking garage, which will remain, and the main theater building, connecting the campus across the west side of Halsted.

Steppenwolf plans to spend $73M on the three-phase expansion. The new building at 1646 North Halsted will cost $54M. To date, the company has raised $46M from the board and ensemble toward this goal, including $8M from an asset sale, according to campaign co-chairs Nora Daley and Eric Lefkofsky.

CBRE promoted John Parrett to executive vice president with its Chicago-based capital markets debt and structure finance team. Since joining CBRE in 2006, Parrett helped structure and close more than $4B of transactions. He was named a top 10% producer for CBRE Americas in 2016, 2017 and 2018.

Lee & Associates of Illinois hired longtime real estate veteran Brent De Noble for its industrial team. For the last few years, De Noble has owned and managed a couple of technology/security companies. He will team up with Jay Farnam to focus on the DuPage and O’Hare submarkets. De Noble began his commercial real estate career in 1988 at the infancy of the industrial expansion along the I-55 Corridor. He spent most of his CRE career at Grubb & Ellis and Colliers International. 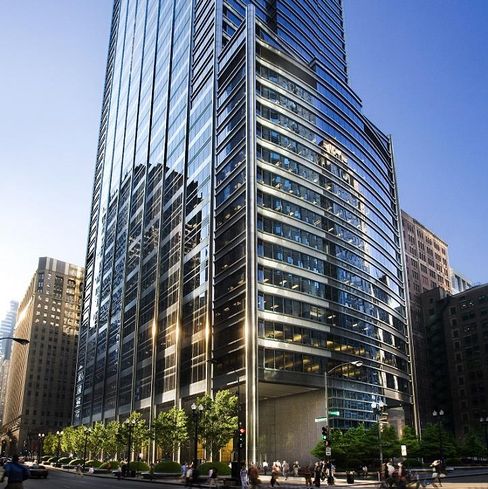 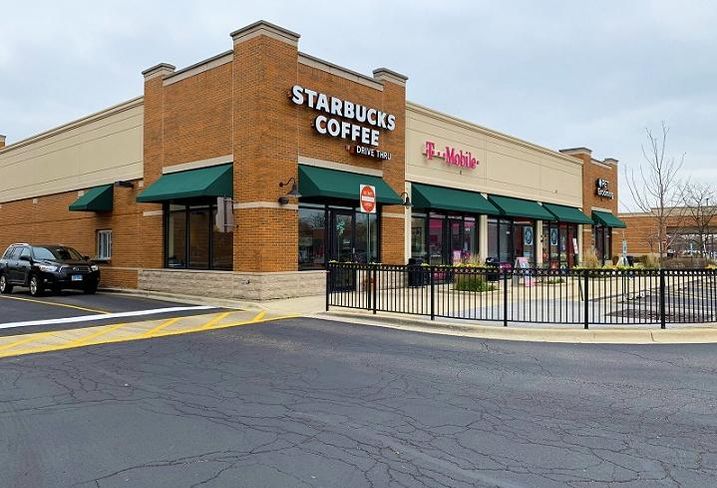 Quantum Real Estate Advisors’ Chad Firsel and Daniel Waszak brokered the sale of a multi-tenant retail building at 28341-28361 Diehl Road in west suburban Warrenville. The roughly 18K SF property sold for $5.4M. At the time of sale, the property was 93% leased to national and regional tenants including Starbucks, Potbelly, T-Mobile, Spotted Paw and Jazza Nails. The buyer was a Chicago-based private investor in a 1031 exchange. The seller was a Chicago-based investment group.

B+E listed a Planet Granite climbing gym, to be developed by Structured Development at 1450 North Dayton St. in Chicago, for sale for $21.9M. The future gym will have about 41K SF on more than one-half acre, and Structured expects to complete it by August 2020. It has a 15-year triple-net lease for a 5.5% cap rate. 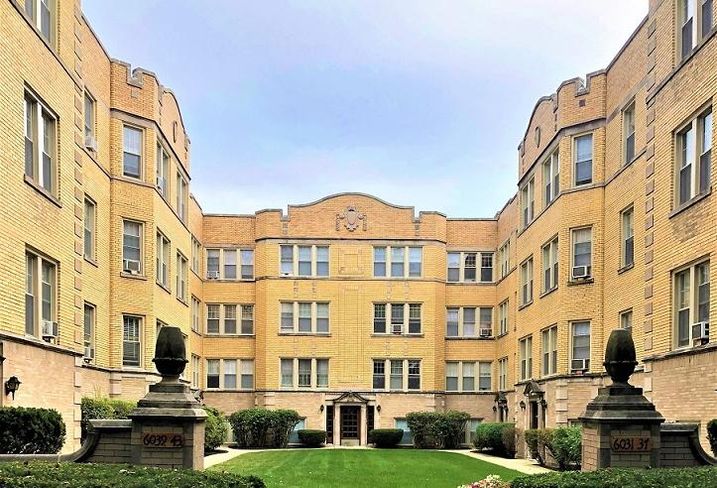 Essex Realty Group completed the sale of 6031-6043 North Paulina St., a 43-unit courtyard building in Chicago’s Edgewater neighborhood. The yellow courtyard building has been owned and maintained by the same family for more than 50 years and sold for approximately $5.7M. Records indicate the property was purchased in 1965 for a price of $260K. The purchaser was a private investor completing a 1031 exchange. Doug Imber, Kate Varde and Clay Maxfield were the brokers.

Marcus & Millichap completed the sale of 114 South State St., a 28K SF retail property in Chicago. The asset went from contract to close in under 60 days and sold for $9.1M. Marcus & Millichap’s Austin Weisenbeck, Sean Sharko and Joseph Bono marketed the property on behalf of the seller. They also represented the buyer, a local investor in a 1031 exchange. The property was completely renovated in 2007.

Lendlease completed 26 townhomes, six penthouse apartments and penthouse-level amenities at The Cooper at Southbank, its 29-story, 452-unit luxury apartment tower at 720 South Wells St. in Chicago’s South Loop. The deliveries are the final phase of construction on the riverfront high-rise, the first of several residential towers planned in the firm’s 7-acre Southbank development. The newly completed rental townhomes have views of the river and the future Southbank Park, a 2.5-acre green space at the community’s center. Lendlease recently started construction on the park and the adjacent Riverwalk extension, which will open to the public later this year.

Chicago-based Akara Partners completed Home2 Suites by Hilton Chicago River North, a 17-story extended-stay hotel at 110 West Huron, and will hold a grand opening celebration March 19. The new hotel includes 206 suites, and on-site amenities including a 24-hour business center, a snack bar/deli, an outdoor fire pit and a combined fitness/laundry facility. Other Chicago developments by Akara include The Hensley in River North, Kenect in River North and LINKT in West Town. 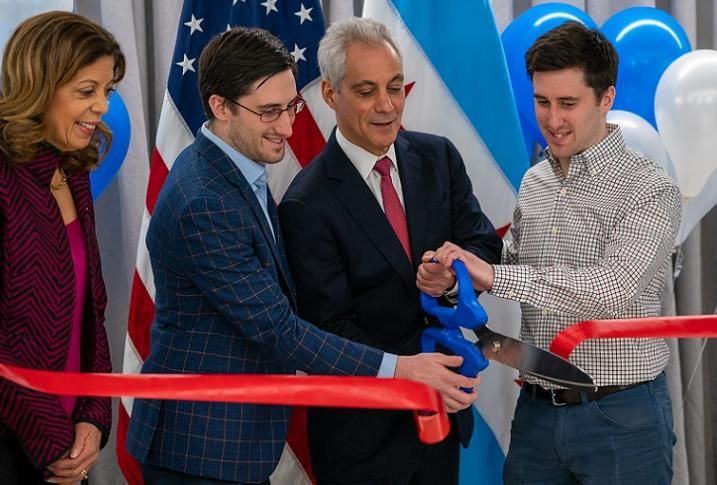 The Chicago Regional Council of Carpenters, which represents over 30,000 members, and the Mid-America Regional Bargaining Association, a multi-employer association focused on collective bargaining in the commercial construction industry, reached a new five-year agreement. The agreement, effective June 1, will improve wages, healthcare and pension benefits.

“By addressing contractor concerns and delivering a very good contract for our members and their families, we’ve eliminated the possibility of incurring work stoppages,” CRCC Executive Secretary-Treasurer Gary Perinar said.