Charlotte Area Transit System CEO John Lewis will be on the first LYNX Light Rail Blue Line Extension train out of UNC Charlotte Friday. He will take it into Uptown, greeting new passengers along the way, then he will exit and join in the NCAA pre-game celebrations before the first game tips off. 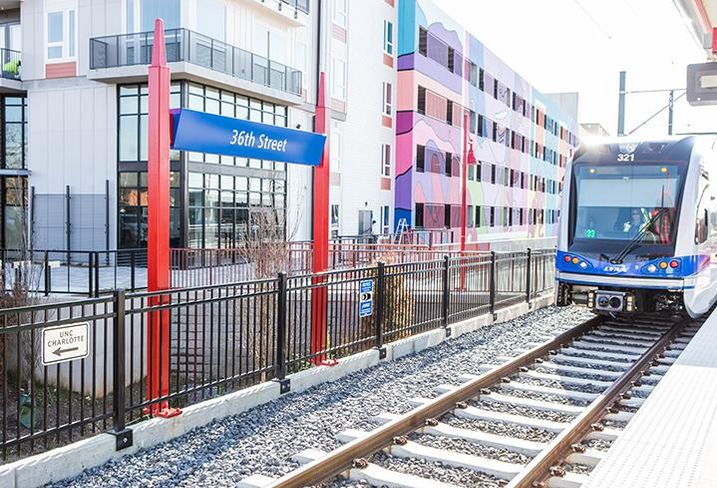 Charlotte Planning Director Taiwo Jaiyeoba knows where he will go on his first official ride: Seventh Street Market for a coffee from Not Just Coffee, and then he will ride the light rail north to the university and back.

White Point Partners partner Erik Johnson, one of the developers behind the massive food hall Tompkins Hall, will start in South End and head to Parkwood Station, where Tompkins Hall will be located.

“It will be a great perspective from the light rail bridge that goes over the CSX rail line,” he said.

The latest piece of the LYNX Light Rail has not even opened to the public yet, and it is already all anyone is talking about. Developers have rushed in to stake claims at stations all up and down the extension, with the stations closest to Center City in particular already showing a large increase in density. 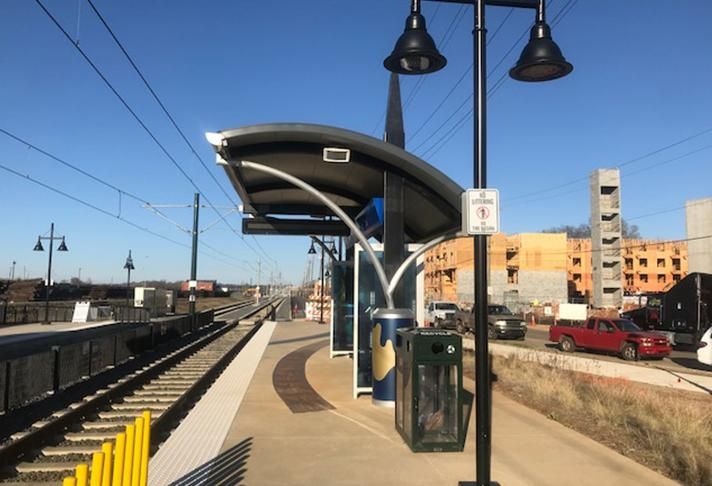 “Even before we open Friday, as you go along that corridor, development is popping up like weeds,” Lewis said. “When you look at the Blue Line, 10 years ago when it opened, it was a little new for the area and some people were skeptical, some people were slow to catch on, but the community caught on immediately.”

The trains were full from Day One, Lewis said.

About $2B has been spent in development along the South End corridor, where the light rail originated a decade ago, Lewis said.

This time around, developers do not seem skeptical. Already, $500M has been spent in new development along the extension — and the train is not yet moving.

“The experience of the Blue Line and the success of it, not just the mobility standpoint but from an economic development standpoint, is certainly following on the extension — and I anticipate that will continue in the years to come,” he said.

The sense of permanence that comes with tracks in the ground lends to a catalyst for change, Jaiyeoba said.

“We see property values balloon along corridors, especially around stations. It’s attracted development among communities. It’s created jobs and opportunities for people to move from one place to the other without having to drive. It’s modern mobility.”

Eleven more stations will be added with the opening of the Blue Line Extension, adding to the 15 already in existence. Many of the stations are already surrounded by new development. Here is a roundup of what is going on at those spots: 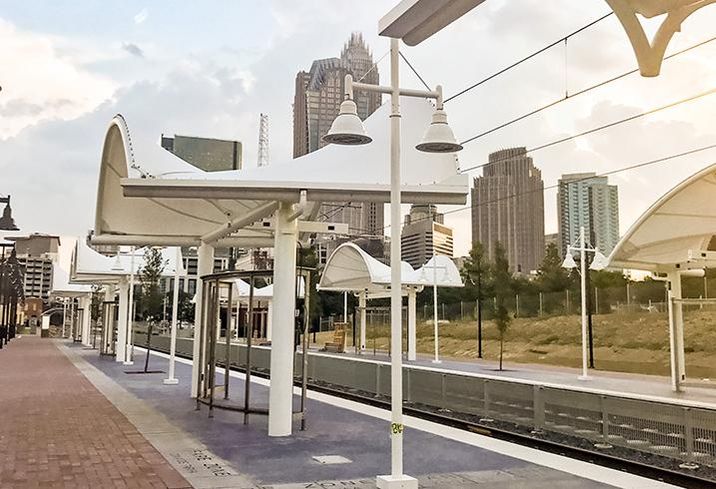 A mixed-use development a block from the station will be called 10 Tryon and will be led by Centro Cityworks’ David Furman and Charles Campbell at Flagship Capital Partners. It will include Publix, a restaurant and other small retailers as well as office space. Final build-out is not yet complete but architect Axiom Architecture lists plans for two office towers totaling 200K SF. The project will be leased by Cushman & Wakefield.

LMC Block 42 Holdings, an entity affiliated with homebuilder Lennar, is planning a mixed-use project likely with apartments and retail.

Levine Properties is building a parking deck wrapped by 264 apartments at 10th and Brevard streets. The parking deck will hold 1,300 spaces and the apartment plan is being redesigned to accommodate ground-floor retail, according to The Charlotte Observer.

At 525 North Tryon, Foundry Commercial created an indoor, climate-controlled secured locker facility for bikes, which will allow commuters to hop off the train and walk or bike to the office. The bike storage and locker room facilities are all part of access for employees to get to their offices, Foundry Commercial principal and Carolinas Market Leader Charles Jonas said.

“We view it as a connection piece between our building and the mass transit options offered by the city of Charlotte.” 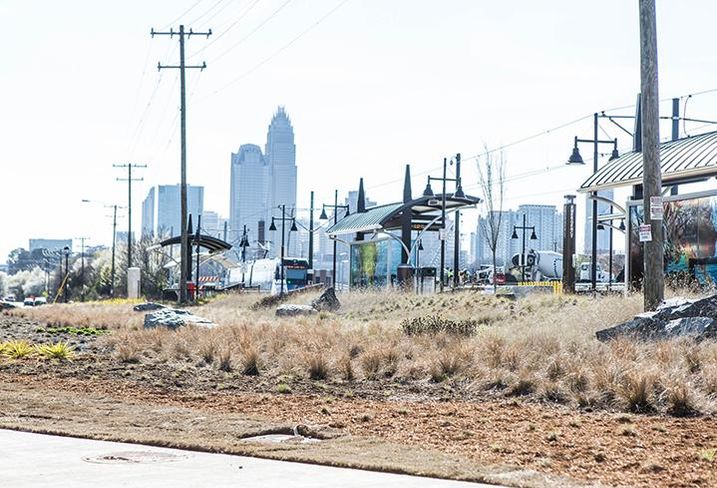 Parkwood Station, nestled between Uptown and NoDa, is adding new apartments and adaptive reuse developments to its lineup. Within walking distance of the station, hundreds of new apartments are being built, including the 309-unit Parkwood Station by The NRP Group and JHP Architecture, the 250-unit Alexan Highland Mill and the 48-unit 300 Optimist Park.

Food hall, office and brewery project Tompkins Hall is under construction a block away in a 125-year-old former mill building that housed Highland Park Manufacturing Co. The project is a joint venture of Atlanta-based Paces Properties and Charlotte-based White Point Partners. Legacy Real Estate Advisors is leasing the culinary and retail components of the hall and JLL is leasing the office space, filling a combined 132K SF.

“What we were looking for in terms of redevelopment opportunity is something that took advantage of the light rail, pedestrian access and population center of Charlotte,” Johnson said. 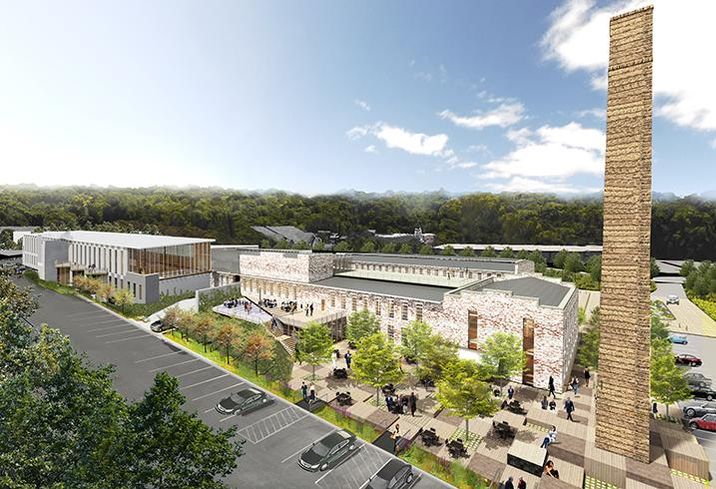 Duke Energy will be Tompkins Hall’s anchor tenant, occupying all of the office space. Six restaurants and 19 food stalls will be available, as well as retail offerings. Food and beverage tenants will include Fonta Flora Brewery, Undercurrent Coffee and a French rotisserie from the team behind Aix En Provence. Fonta Flora will have a 2,400 SF tasting room with a 5K SF outdoor patio.

The location, and the character and history behind the mill building, drew the developers to Tompkins Hall, Paces Properties principal Merritt Lancaster said. At first glance, he said it did not look like much.

“It looked like a Sam’s Club from the outside,” he said. “You couldn’t even see the old mill that was basically buried inside 100 years of additions.”

Once inside, Lancaster said they saw the fundamental character of the building. “Even if you built it new, I don’t think you could make it feel the way this feels. It’s an incredible structure.”

Duke will move in over the summer, and the developers are anticipating being fully functional by the end of the year, Johnson said. 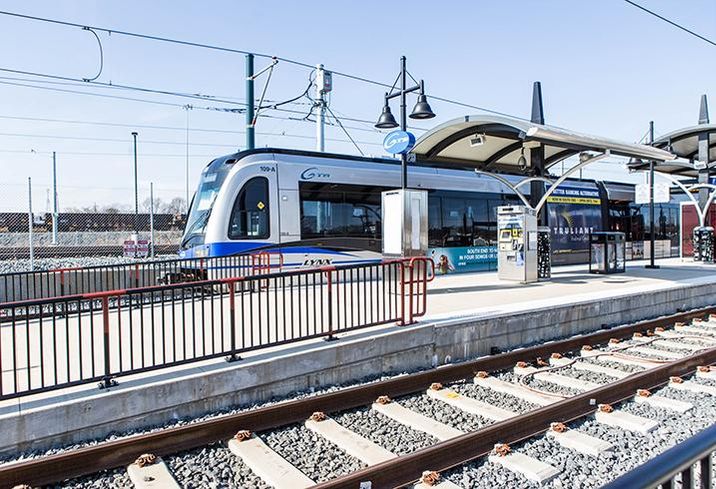 Alta Warp and Weft, constructed by Wood Partners, will be a 261-unit apartment complex on 2.3 acres at 25th and Brevard streets. Ram Realty Advisors and Citisculpt are developing 250 apartments nearby, next to Free Range Brewing. The project includes the renovation of the adjacent 17,500 SF commercial building.

Up the street, Saussy Burbank shocked nearby residents with news the builders are planning to sell its 33 townhomes for $500K on a site between 25th Street Station and 36th Street Station. 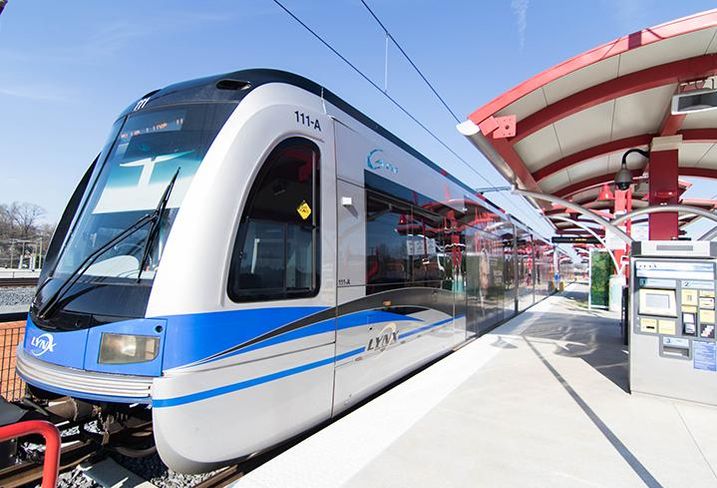 “It’s like creating a walk down to the oceanfront,” Crescent President of Commercial and Mixed Use Brian Leary said.

Asana Partners will announce the tenants for its 7,500 SF of retail space any day now.

Across the street, Davidson Street Public House Property is up for rezoning to transit-oriented development; the property owners plan to convert a parking lot into an arts market.

For those who desire greenway access, Flywheel Group’s Greenway District will offer light rail and greenway options at its new 75-acre mixed-use community that will include 2,600 residential units, 200K SF of retail and 600K SF of office. 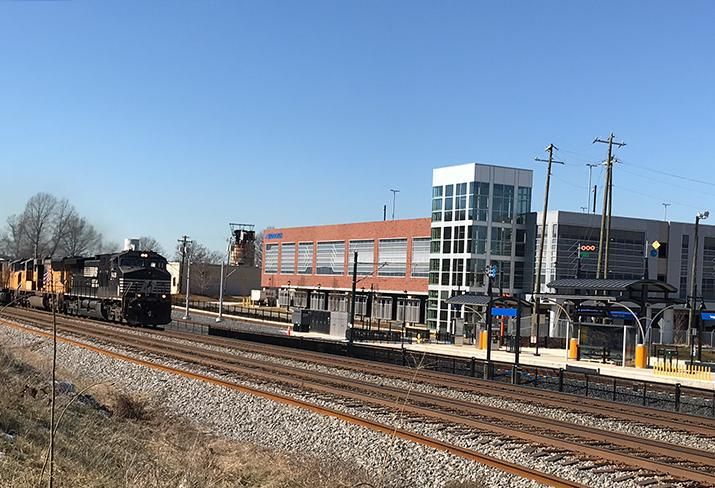 Bisnow/Melissa Oyler
A train approaches on tracks that run parallel to the LYNX Light Rail line at the future Sugar Creek Station.

The Charlotte Art League has been announced as the anchor tenant of Flywheel Group’s adaptive reuse project Station House. Station House is a 45K SF warehouse that will serve as a mixed-use space designed by Odell Associates Inc. Flywheel is also planning a 100K SF new construction office and retail space, which will ultimately be combined with the 4.5 acres Flywheel owns across the street to create a larger retail, dining and entertainment-centered mixed-use project on 8.5 acres. 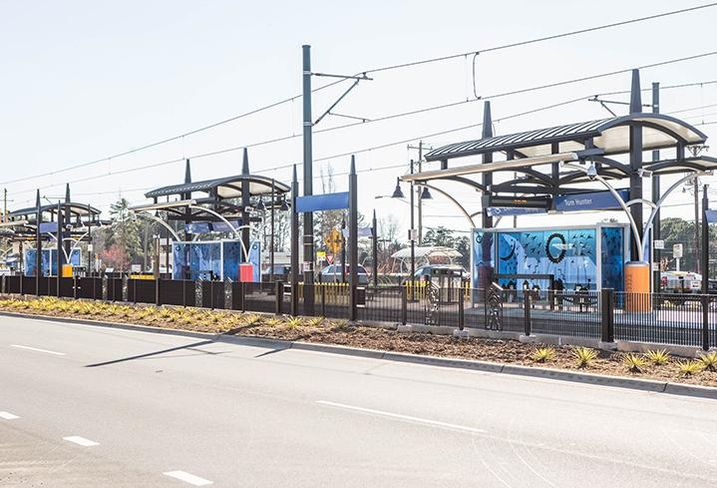 Blu at Northline apartments, built in 2016 by Carolina States Regional Center led by principal Jane Wu, are just north of the Tom Hunter Station and offer 376 units. Residents began moving in at the end of the summer. 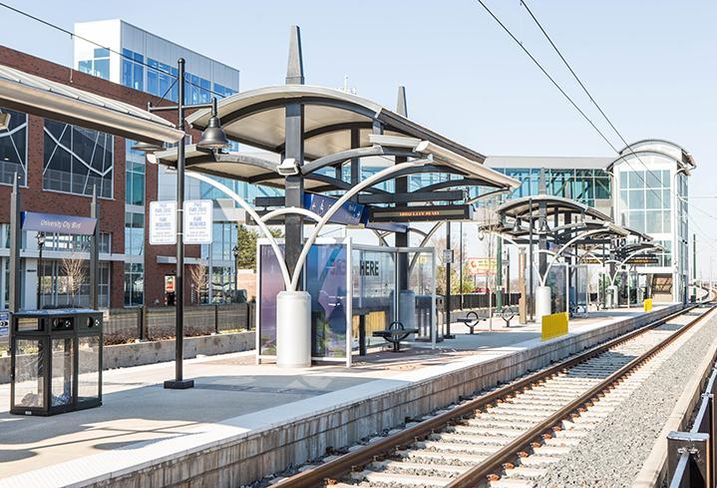 University City Partners is focused on a master plan for each of its stations. About 80,000 people work in Research Park in University City, Heater said recently.

“We’ve been very focused on adding housing next to our research park.” In addition to future Crescent Communities multifamily rentals, Heater said University City Partners is working with a developer to plan 400-600 townhomes for the area. 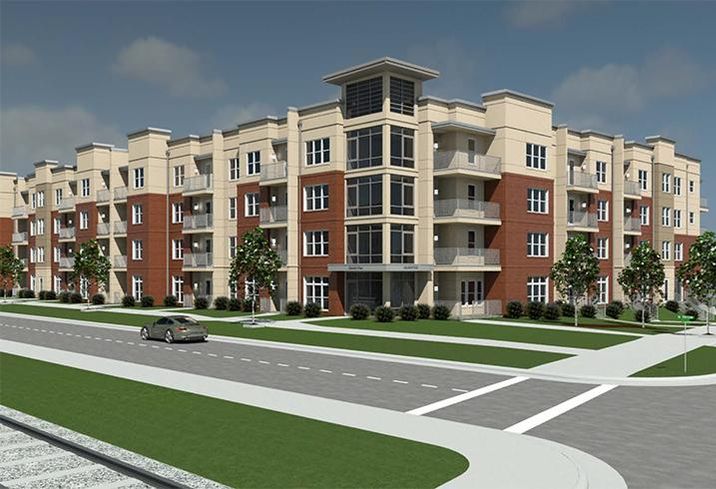 V & three is a 338-unit multifamily project by Atlanta-based Oxford Properties. Oxford Properties Development Partner Paul Austin said V & three will feature a Train Lobby, where residents can wait inside during inclement weather and check light rail schedules and progress via monitor. Austin said future plans for a University City entertainment district with anchor tenant Topgolf will only add to the area’s energy, but the light rail is the reason for it all.

“It was the most critical deciding factor for us being there,” Austin said.

“Our existing office buildings were impacted by the expansion of North Tryon to construct the Blue Line,” Atapco Director of Development Dave Lazas said. “This plus our location at the McCullough Drive Station prompted us to investigate an opportunity to redevelop the two affected office buildings.”

“It also calls for creating a student Main Street, which is something UNC Charlotte has lacked for, gosh, the past 60 years,” she said. “It’s just a remarkable opportunity.”

The train will end at University of North Carolina Charlotte’s main campus, where 30,000 students will have transit passes included with tuition.

Heater said the light rail extension has been transformational already just in the investment and infrastructure at University City’s four stops.

“When you drive up North Tryon Street, you will not recognize it,” she said. Not a lot of the landscape or building form has changed yet — but it is coming, she said. “We’ve got several projects in the pipeline that are going through permitting right now. It’s going to look very different in a year or two.”

UPDATE, MARCH 15, 4:28 P.M. ET: Ram Realty Advisors is a developer along with Citisculpt for 250 apartments near 25th Street Station. The project includes the renovation of the adjacent 17,500 SF commercial building. The article has been updated.