23 New Restaurants To Try In D.C. This Summer

The explosion of D.C.'s dining scene has not slowed down, with new restaurants opening every week across the District and its surrounding suburbs.

Many of the openings are occurring at massive mixed-use developments such as The Wharf and Ballston Quarter. Some are on the ground floors of downtown office and apartment buildings, and some are in stand-alone retail buildings in D.C.'s more residential neighborhoods.

The rapid pace of openings can make it hard to keep track of what's new in the D.C. dining world. Bisnow found 23 new spots, from fine dining restaurants to fast-casual concepts to cafés, that D.C. residents and visitors can try this summer. 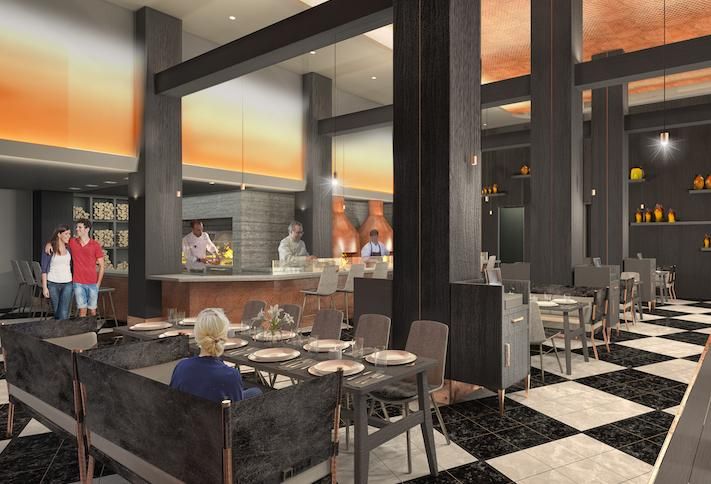 Courtesy of Cherry
A rendering of restaurant concept Cherry, opening in the W Washington D.C. hotel

The W Hotel, one block from the White House at 515 15th St. NW, has just undergone a $50M renovation and is welcoming two new restaurants in June. Both restaurants will be led by Chef William Morris. The first concept, Cherry, will feature a 15-foot hearth and wood burning ovens. Its menu will include slow-roasted chicken, rotating butcher's cut of beef, wood-fired crab cake and skillet of shrimp. Its drink offerings will include local beers on tap and cocktails with spirits sourced from the D.C. area.

The second restaurant opening at the W Hotel, Corner Office, will serve artisan wood-fired pizzas, cheese and charcuterie, and seasonal salads. Its bar will boast 38 rotating taps and it will have a beer garden and bocce courts outside.

A new fast-casual burger concept is debuting in July at 700 Penn, the office building in the Hine School redevelopment that delivered in 2017 from Eastbanc, Stanton Development and Jamestown. The new concept, Eat Brgz, will create made-to-order burgers with custom ingredients mixed into the patty before it is cooked. The menu will include feature offerings such as the Greek-style burger, with feta cheese, olives, cucumber and tomatoes mixed in. 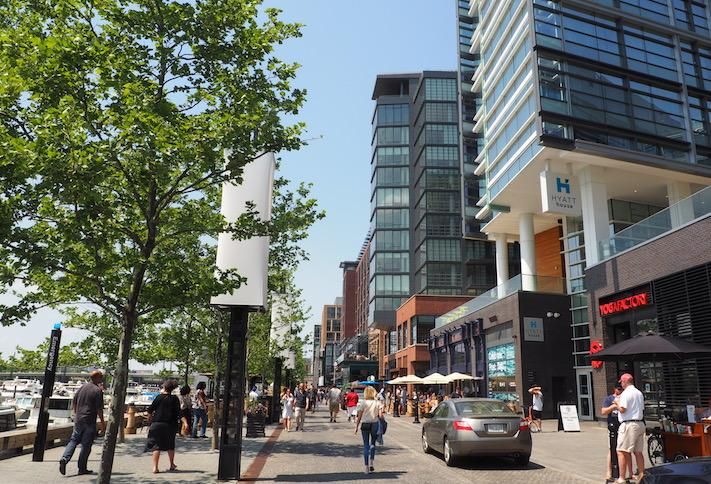 Bisnow/Jon Banister
The Wharf's Water Street, home to many of the development's restaurants

The closing of sandwich shop chain Taylor Gourmet left a retail vacancy at The Wharf. The chain's owner, Casey Patten, is now introducing a new concept in the space at 85 District Square. Grazie Grazie, an Italian deli and salad shop, began its soft opening Thursday.

At The Wharf's 1140 Maine Ave. SW, Falafel Inc. opened in April with falafel, hummus, bowls and sides. The philanthropic eatery, which had its first location in Georgetown, donates a portion of all sales to help feed refugees.

The group behind trendy New York hotel bar Mr. Purple, the Gerber Group, opened rooftop cocktail bar 12 Stories at The Wharf in April. The 3,500 SF bar at 75 District Square features 13-foot floor-to-ceiling windows and an outdoor terrace with views across the city. It serves a variety of craft cocktails and its food options include oysters and a buttermilk fried chicken sandwich. 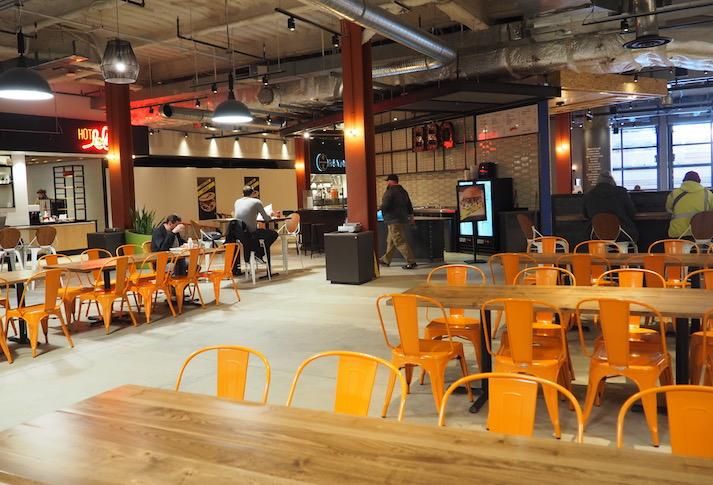 California-style seafood shack Slapfish plans to open in June at Ballston Quarter, Brookfield's major mall redevelopment that delivered earlier this spring. It is the fourth location in the region for Slapfish, which has outposts in Downtown D.C., Rockville and Loudoun County.

Local restaurant chain Ted's Bulletin is also opening in Ballston Quarter in June. It will be the sixth location for Ted's. The brand was acquired in 2017 by restaurateur Steve Salis, who signaled plans to refresh and expand the chain. The Ballston Quarter location will also include an attached Sidekick Bakery, the first stand-alone location for the concept.

Italian eatery Cucina Al Volo is opening its first Virginia location at Ballston Quarter this summer. It will serve breakfast, lunch and dinner and feature a variety of homemade pastas.

South American restaurant Maizal will open its second location, and first in Virginia, in Ballston Quarter's Quarter Market food hall this summer. It offers a take on the arepa, a South American street food that tops a cornmeal patty with meats and vegetables. 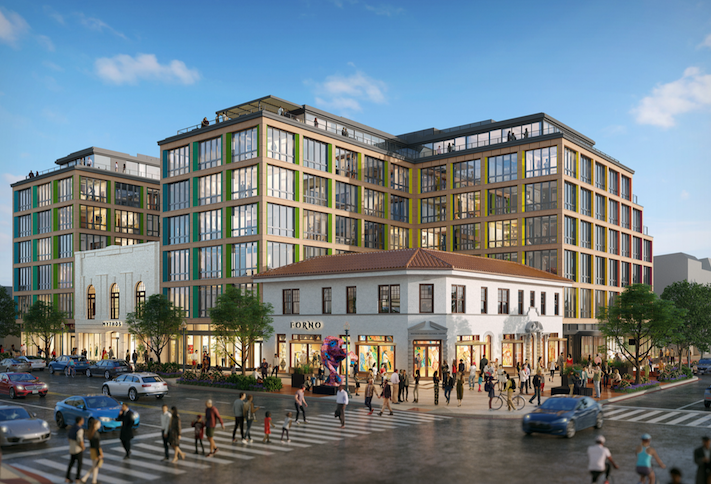 Courtesy of Fivesquares Development
A rendering of Liz, the mixed-use project near 14th and R streets NW

Australian-inspired café Bluestone Lane plans to open this summer at Liz, the 14th Street mixed-use project from Fivesquares and Whitman Walker Health System that will include 78 apartments, 60K SF of office space for the health system and 20K SF of retail, including a cultural center. Bluestone Lane will serve breakfast, lunch and evening food offerings.

Reid Shilling, whose uncle founded the Shilling Canning Co. to preserve produce, will open a restaurant with the same name this summer. It will open on the ground floor of the Arris apartments at The Yards in the Capitol Riverfront neighborhood. The restaurant will serve Mid-Atlantic cuisine and feature wood-fired ovens to cook pizza and bread.

A new brewery and kitchen opened May 25 at Riverdale Park Station, the Whole Foods-anchored mixed-use development in Prince George's County. Denizens Brewing Co. will serve its own year-round beers and seasonal selections, plus a variety of cocktails. It also has a kitchen serving burgers, fish and chips, mussels, quesadillas, wings and other shareable offerings.

The 3K SF restaurant opening at Southeast D.C.'s new Novel South Capitol in August does not yet have a name, but it does have a celebrity chef. Erik Bruner-Yang, the James Beard-nominated chef behind D.C. restaurants Maketto, Spoken English and Brothers and Sisters, will open an all-day café concept with breakfast food, evening snacks and craft cocktails. 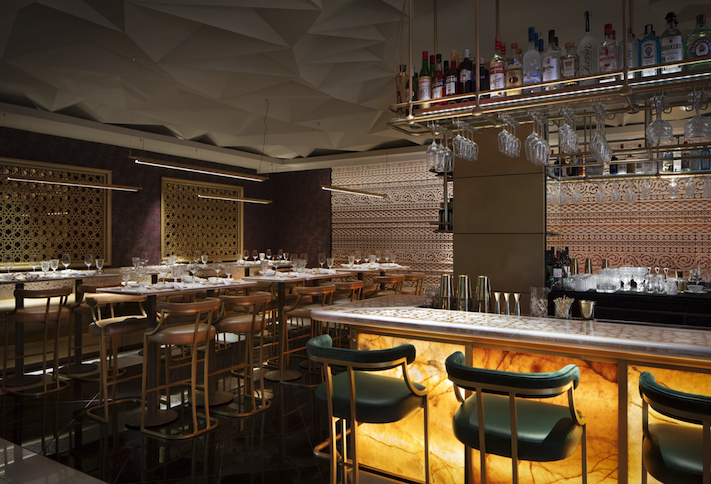 Fine dining Indian restaurant Punjab Grill opened in March at 1001 Pennsylvania Ave. NW. It is the first location in the U.S. for the restaurant with a presence in the United Arab Emirates, Singapore and Thailand. The restaurant features a colorful, elaborately designed interior and its menu includes fine dining takes on traditional Indian street food.

Sakerum owner Stephanos Andreou is planning to open Tokyo Pearl next month at 1301 Connecticut Ave. NW. The restaurant will serve fast-casual style poke bowls and sushi rolls to the lunch crowd and will convert to a gastropub with a bar and entertainment area during the evening.

The third location of Duke's Grocery opened Thursday at The Shops at 2000 Penn in Foggy Bottom. The 125-seat restaurant, led by owner Daniel Kramer and Chef Rick Koplau, has an all-day food menu with a variety of global sandwiches. Its bar has 12 draft lines and a cocktail menu and will offer happy hour from noon to 7 p.m. on weekdays.

After opening its first restaurant in Chinatown in 2016, Reren Lamen & Bar plans to open at 1073 Wisconsin Ave. NW in Georgetown. The Asian restaurant, serving dishes influenced by Thai, Japanese and Chinese cuisine, is expected to open this summer.

Billed as the Italian version of a Spanish tapas restaurant, Retrobottega plans to begin serving small plates in Adams Morgan this summer. The Italian concept from Al Volo partners Rolando Frias and Matteo Catalani will seat 60 people inside and 24 outside at 2435 18th St. NW.

Perseus Realty's Penn Eleven development on Capitol Hill is preparing to welcome Emilie's, a 100-seat restaurant from Himitsu Chef Kevin Tien. The concept will have an a la carte menu with seasonal small plates and rolling cart specials. Tien told Eater he was shooting to open by the end of May.