A Decade In The Making: Capitol Hill's Hine School Development Prepares For Opening

The 2007 closing of the Hine Junior High School presented a development opportunity rarely seen on Capitol Hill. After years of legal challenges from neighbors in the residential community around Eastern Market, Stanton Development and Eastbanc are near the finish line of their mixed-use transformation of the historic property. 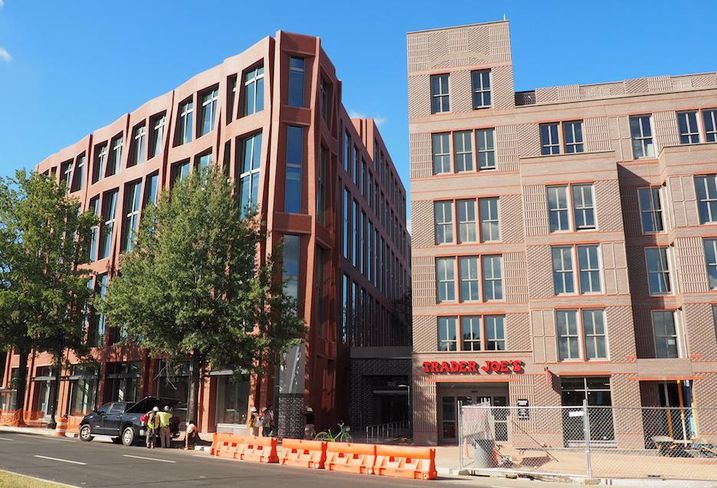 Neighbors will begin shopping Friday at the Trader Joe's that anchors the Hine School development's 60K SF of retail. The first residents will move into the 128-unit apartment building next month. And on Nov. 7, companies will begin moving into The Yard co-working space, the first lease signed in the 156K SF trophy office building.

The development, designed by Weinsten Studio, Esocoff & Associates (before the firm was absorbed by Gensler) and Oehme van Sweden & Associates, was created to meet LEED Gold and Silver certification. Rising seven stories tall, it sits at 700 Pennsylvania Ave. SE, across the street from the Eastern Market Metro station. 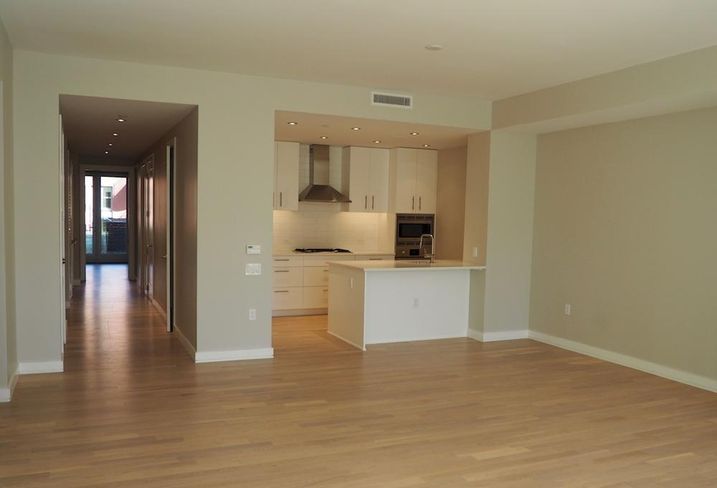 After going through a two-year entitlement process that culminated in 2012, the project was delayed another two years by appeals from neighborhood residents. Some of the opposition focused on the size of the project, while others expressed concern about architectural issues. Several design changes were made to the project to ensure it integrated with the neighborhood of townhouses.

"We designed The Residences at Eastern Market to fit into the surrounding community by varying the façade types and paying homage to the Hill's historic details," Eastbanc President Anthony Lanier said in an email. "For example, the 8th Street exterior that we developed to complement the townhouses across the street by introducing bay windows and front entrances for first floor units."

The apartment building caters to families, with larger units than most of the product coming to market in D.C. The building's smallest one-bedroom units measure 948 SF, with rents starting at $3,043 per month. 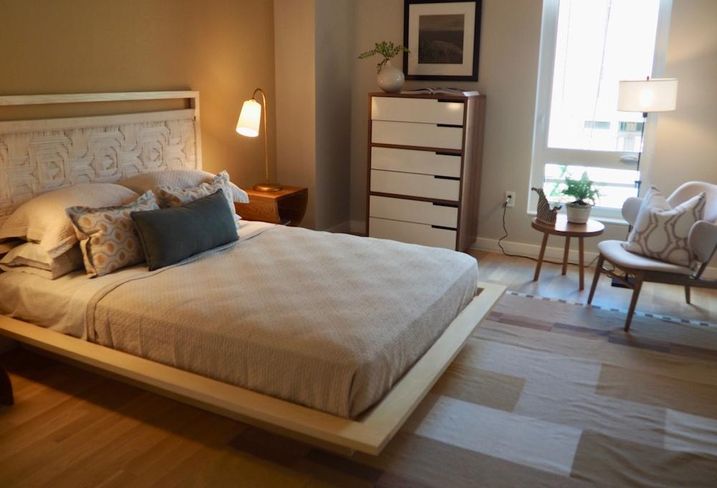 Bisnow: Jon Banister
The master bedroom in the model unit at the Hine School development

The units range up to three-bedrooms with some as large as 1,854 SF. That unit, renting for $8,720, has an expansive living room and a long hallway that spans the entire width of the building with light coming in from both sides. It also has a private terrace leading to the shared outdoor courtyard.

The developers brought on Bozzuto to lease and manage the building. The leasing effort began on Sept. 15 and tenants have committed to four units so far. The apartment community will have 15 three-bedroom, 60 two-bedroom and 53 one-bedroom units. Forty-six of the units will be set aside as affordable. 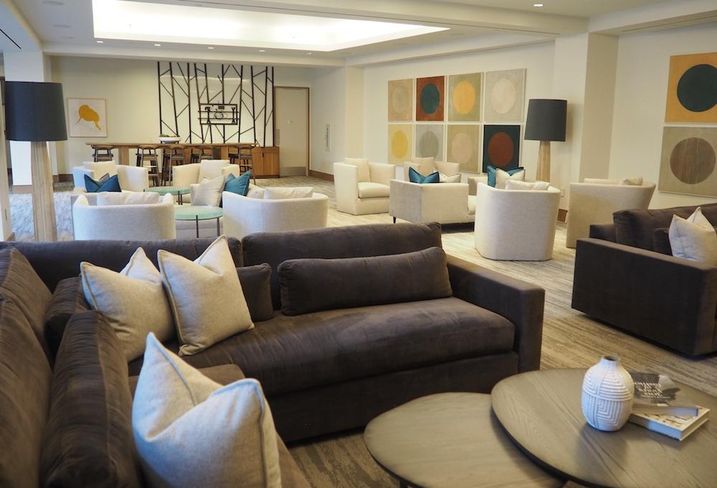 Bisnow: Jon Banister
The clubroom in the Hine School residences on Capitol Hill

The building's amenities include a clubroom with lounging areas and a catering kitchen. The clubroom leads into the outdoor courtyard that features grills and seating areas. The building also has two rooftop courtyards, one with a pool.

The fitness center includes treadmills, Peloton bikes and free weights. Outside the leasing office, a small kitchen offers free coffee and snacks. Next to that, a conference room with a television and eight-seat table is available to residents. 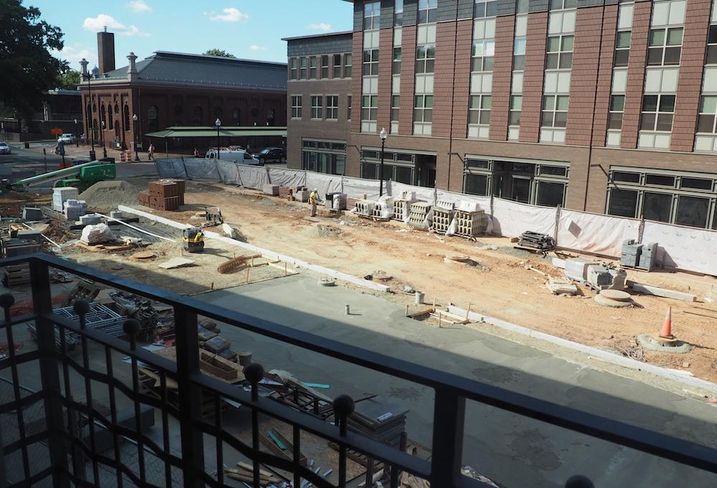 Bisnow: Jon Banister
The private street being created near Eastern Market at the Hine School development

On the north side of the development facing Eastern Market, the developers are constructing a missing piece of C Street SE that will connect Seventh and Eighth streets. The new, stone-paved section of the street that cuts through the project is privately owned by the developer, giving it the ability to close it off for events. It will be surrounded by retail on both sides to create a pedestrian experience that leads up to the popular grocer. 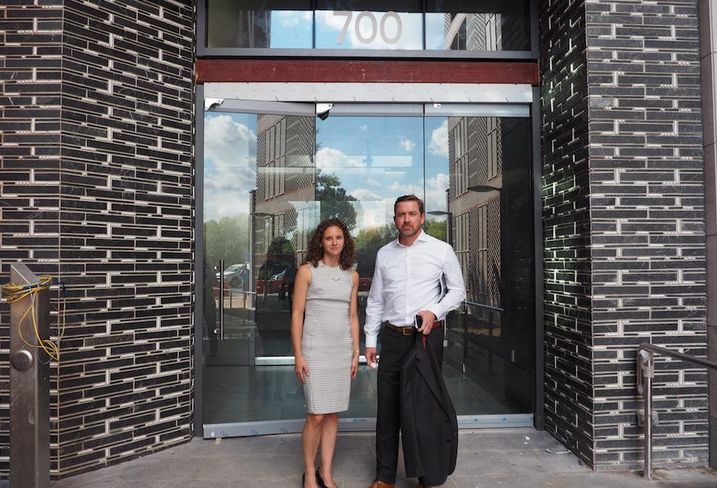 The developers brought on JLL to lease out the 156K SF of trophy office space, a type of product rarely delivered to this part of Capitol Hill.

In September 2016, New York-based co-working concept The Yard signed on to lease 32K SF on the building's second floor. It plans to open on Nov. 7.

"They fit into our style for the building," JLL Managing Director Doug Mueller said. "It will bring an energy to the building. We're not averse to having young people in the building and that vibrancy, that's what we want here." 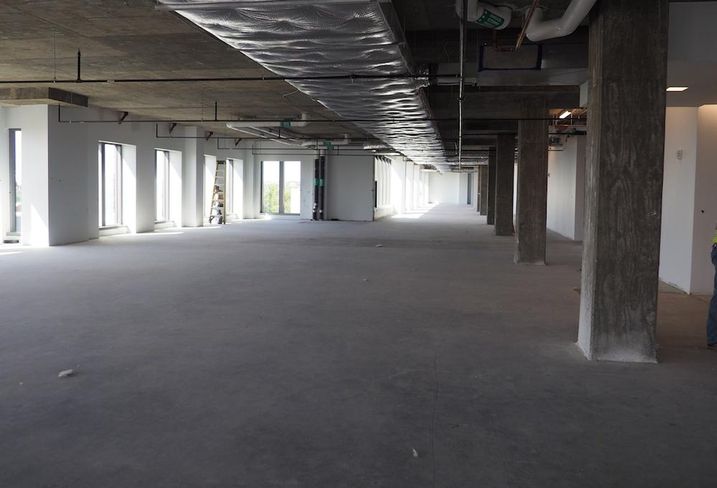 The building has 29K SF floor plates on floors three through six. Mueller said he is close to signing a law firm that will move from the central business district to take 11K SF. He also said he has been in talks with tech companies, government affairs offices, lobbyists and associations.

"The varied nature of the demand has surprised us," Mueller said. 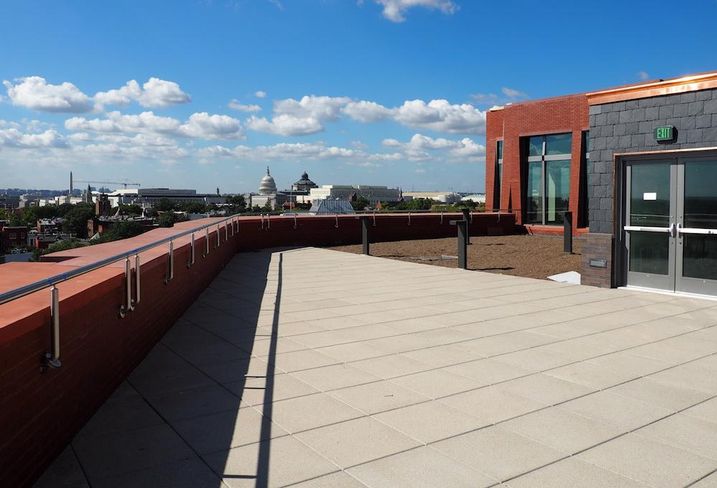 On the seventh floor, the building has a 2,500 SF outdoor terrace, a corner conference room with 50 seats available to all tenants, and a 4K SF indoor event space with 17-foot ceilings.

Surrounded by blocks of three-story townhouses, the rooftop offers unobstructed views of the Capitol, the Washington Monument, Nationals Park and Downtown D.C.