The 11 Largest Condo Projects Coming To The D.C. Area

The D.C. for-sale housing market is so hot right now, and developers hope to capitalize on that with large-scale condo deliveries. Roughly 2,600 condo units are expected to break ground this year, up from just under 1,700 in 2016, according to Delta Associates' Q2 condo report. We took a look at 11 of the largest condo projects under construction across the D.C. area, ranked by number of units. 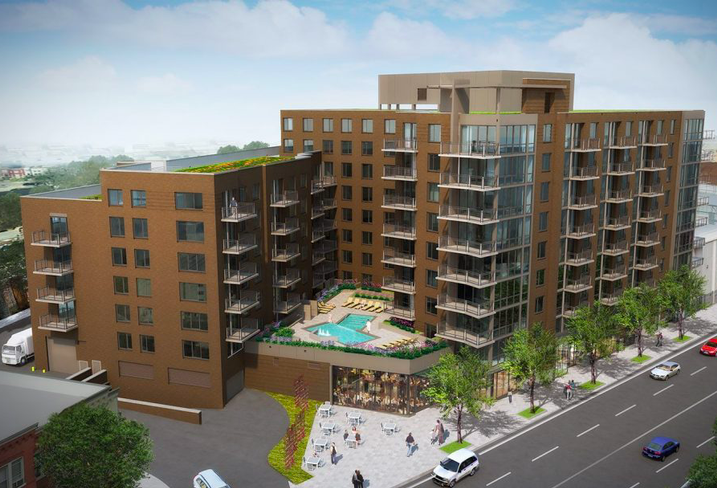 McWilliams Ballard
A rendering of The Lexicon, the 182-unit condo building at 50 Florida Ave. NE 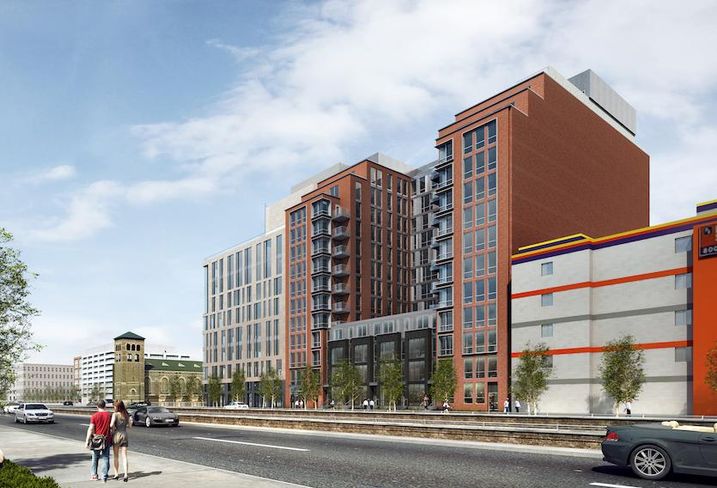 Next to the Capitol Riverfront HQ it is building for the National Association of Broadcasters, Monument Realty is constructing a 171-unit condo building. Just one block north of Nationals Park, 10 Van will include a mix of studios, one-bedrooms, two-bedrooms and some larger penthouse units. The project broke ground in January and is expected to deliver in March 2019, with sales beginning 12 months ahead of the opening.

Monument Realty principal Michael Darby said lenders had been wary of financing large condo projects after the recession, but he said the market is ripe for this type of development now.

“The rental market may be getting to that point where it’s oversupplied, and people are looking to buy, so the logical thing is to build condos,” Darby said.

3. Verse At The Boro 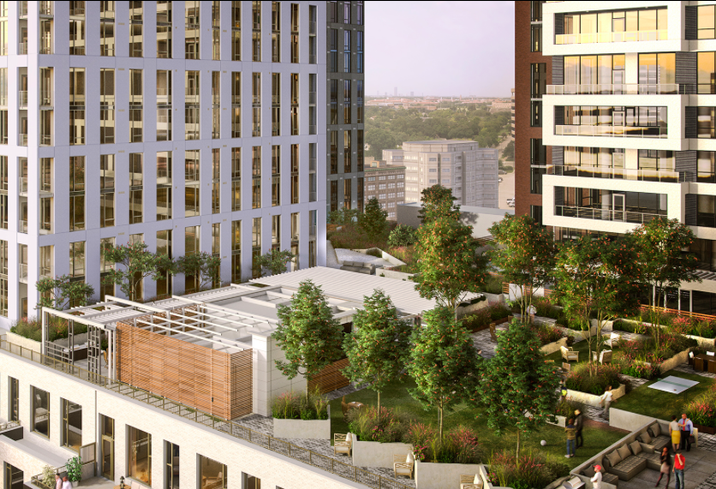 The Meridian Group, Kettler
A rendering of the courtyard at The Boro's 140-unit Verse condo building

The Meridian Group and Kettler broke ground last summer on The Boro, a 3.5M SF mixed-use development in Tysons. The project includes a 140-unit condo building, Verse, which is expected to deliver in 2019. The building will have a range of unit sizes from one bedrooms to three bedrooms with a den. The Boro will also include a flagship 70K SF Whole Foods, the largest in the region, and a 15-screen Showplace Icon movie theater. 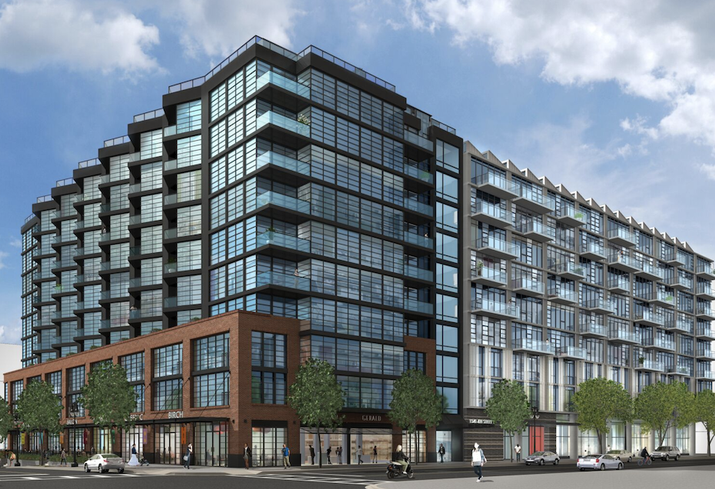 Courtesy: PN Hoffman
A rendering of the Bower condominiums, left, and the Parcel O2 Apartments, the next two multifamily buildings to deliver at The Yards

The first for-sale multifamily project at Forest City's 49-acre The Yards development, PN Hoffman is building a 138-unit condo building called The Bower. The condo building will be adjacent to the 191-unit Parcel O2 apartments Forest City is building, and across the street from Bluejacket Brewery. The project will include 13K SF of ground-floor retail. Sales are expected to begin this year and the building will deliver in fall 2018. 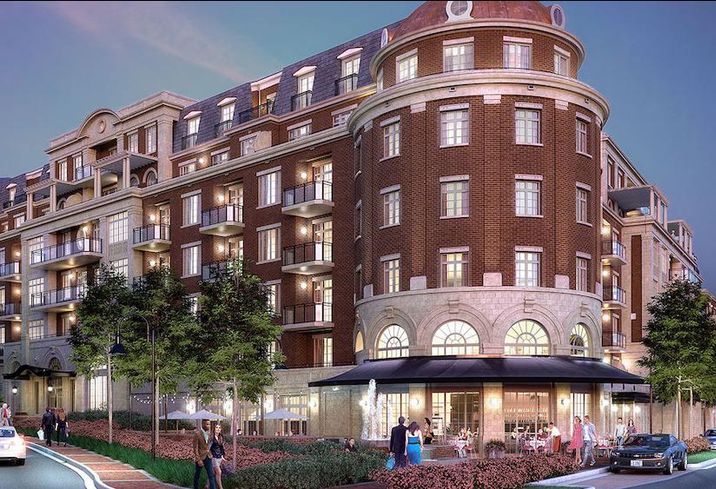 JBG Smith
A rendering of The Signet, JBG's condo project in McLean 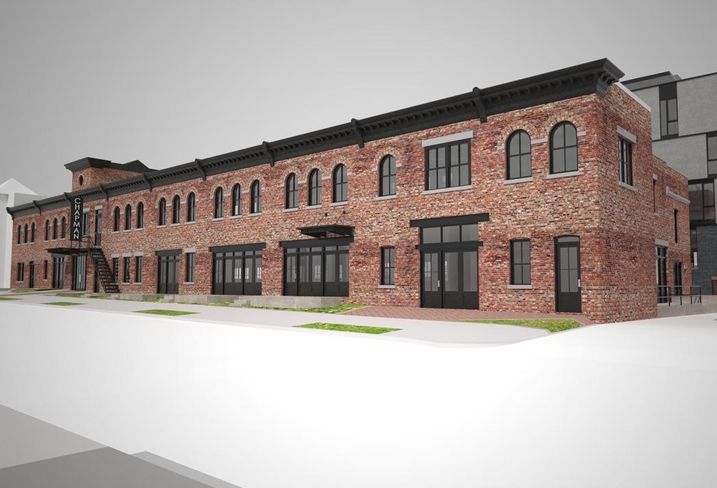 The historic building in Truxton Circle that once housed horses is being transformed into a 114-unit condo project. Four Points LLC broke ground in November on Chapman Stables at 57 N St. NW, three blocks from the NoMa Metro station. Thirty-six of the condos will be contained in the stable building, while the remaining 78 units will be in a new, adjacent, five-story building. The condos will range from 540 SF to 1,100 SF and will be priced from $300K to more than $1M. The project will include 1,200 SF of retail and is expected to deliver in spring 2018. 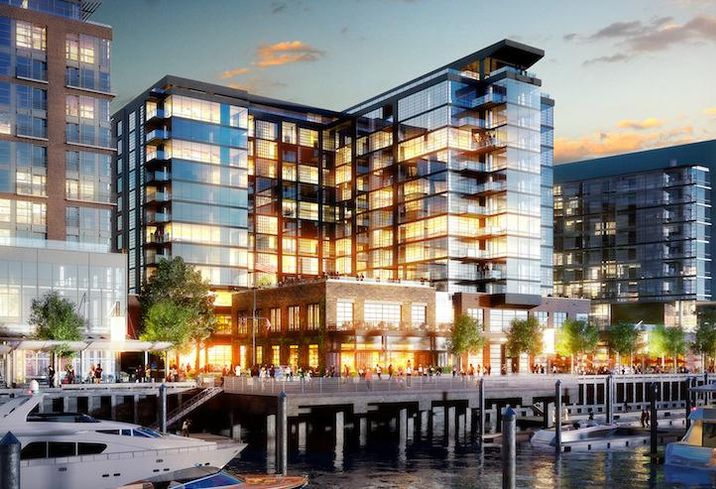 Courtesy: Hoffman Madison Waterfront
A rendering of Vio, a 112-unit condo building at The Wharf

The Wharf's 112-unit luxury condo building is selling up quickly. PN Hoffman CEO Monty Hoffman said in May the building was 70% pre-sold and he expects it to reach 90% in time for its opening, well ahead of the 60% he projected. The first move-ins are scheduled for September. The water-facing units are selling at top-of-market prices between $1,300 and $1,400 per SF, and a three-bedroom unit has sold for close to $4M. The other condo building in Phase 1 of The Wharf, the 97-unit 525 Water, delivered late 2016 and had just 12 units left on the market in May. 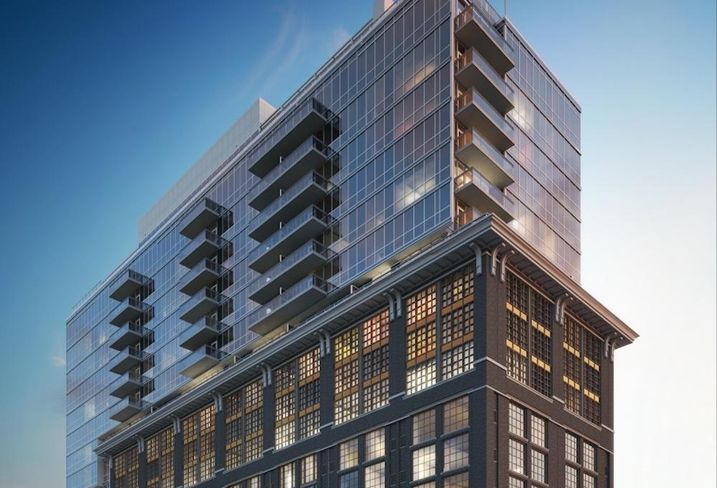 Courtesy: Federal Realty
A rendering of the 930 Rose condos, on floors 11-20 above the Canopy by Hilton

The fast-approaching Phase 2 delivery of Pike & Rose will include 104 condo units at 930 Rose. The for-sale units will be on floors 11 through 20 of the building, sitting above a 177-room Canopy by Hilton hotel. Phase 2 will also include The Henri, a 272-unit rental apartment building, and 216K SF of retail, including experiential restaurant concept Pinstripes and a Porsche dealership. The first residents are expected to move into the condo building in early 2018. 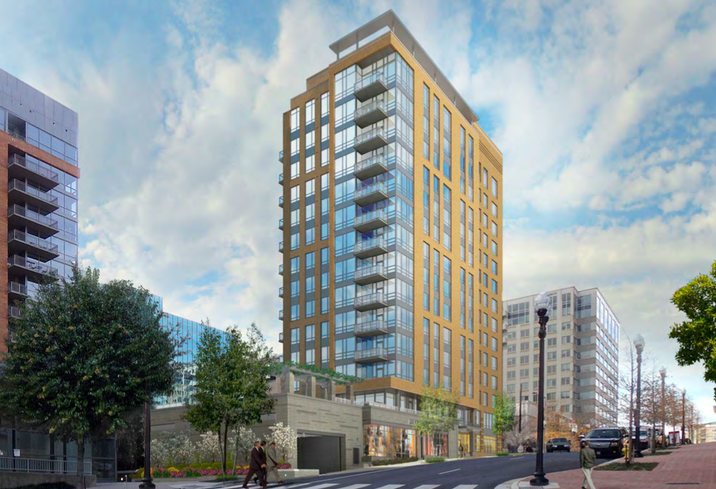 Bush Cos., WDG Architecture
A rendering of Bush Cos. 90-unit condo building at 2000 Clarendon Blvd. in Courthouse

A 14-story condo tower will soon replace the 55-year-old building, Bush Construction's former office, on this half-acre site in Arlington's Courthouse neighborhood. The County Board approved the project on June 18, 2016. It will include 86 market-rate units, four affordable units and 1,900 SF of ground-floor retail. The developer applied for building permits in March, but has not announced a timeline for construction. 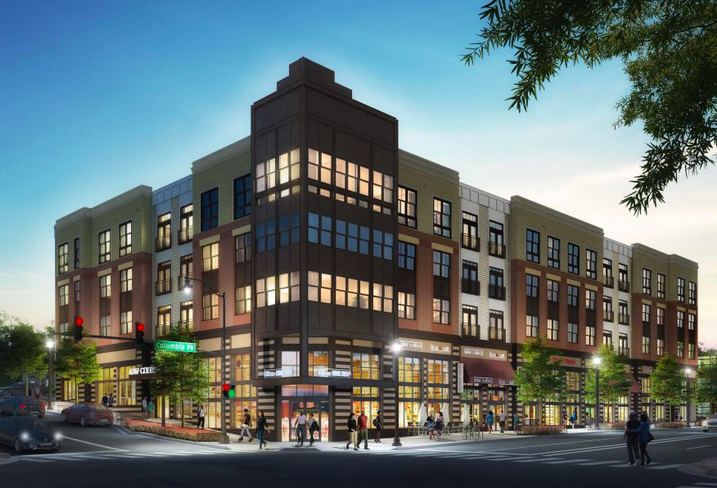 McWilliams Ballard
A rendering of Trafalgar Flats, the 78-unit condo building at 4707 Columbia Pike in Arlington

The 78-unit Trafalgar Flats condo project on Columbia Pike is expected to deliver in spring 2018. Arlington County approved the project, a four-story mixed-use building, in December 2014. The building will have studios, one-bedroom and two-bedroom units, and it will include 8K SF of ground-floor retail. 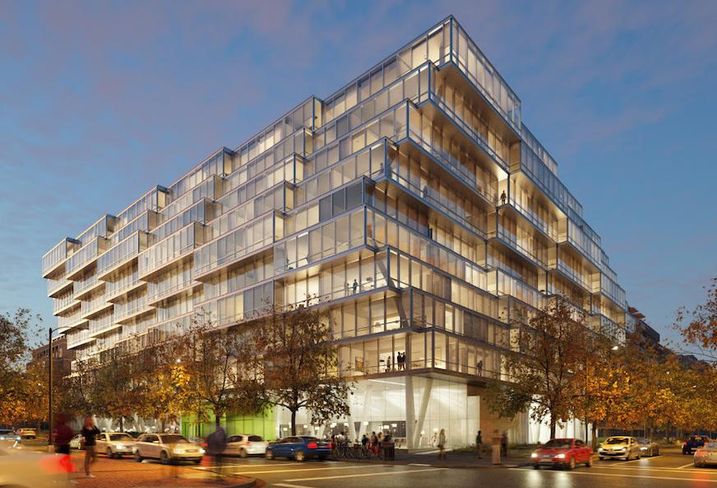 People were lining up around the block when sales began in November for the Westlight condo building. Eastbanc's 71-unit project, designed by architect Enrique Norten, stands out in its West End neighborhood with a cantilevered glass façade. The units are selling quickly at about $1,200 per SF. The first residents are expected to move in this fall. The building also has a 93-unit rental component, which will have a separate lobby and entrance than the condos.