Don Peebles, a national real estate developer who began his career in D.C. in the 1980s, has seen the nation's capital go through several distinct waves of hospitality development. The latest iteration, Peebles said, is the introduction of luxury brands typically associated with larger cities like New York or Los Angeles. 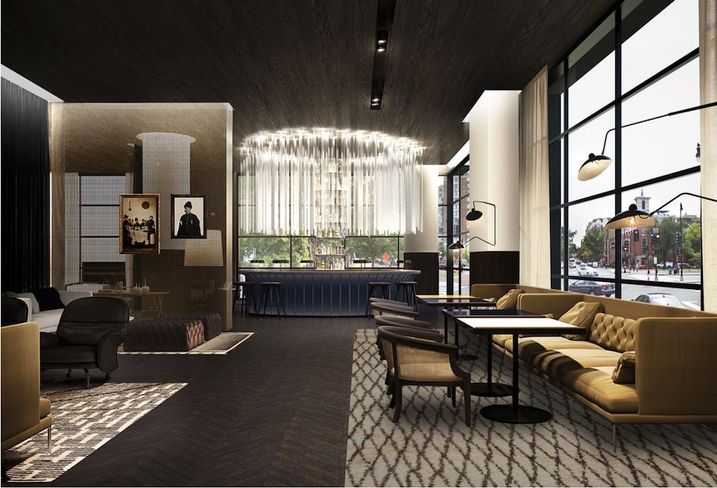 Courtesy of Peebles Corp.
A rendering of the common area in the new SLS Hotel Peebles is developing in Mount Vernon Triangle

"The next wave to D.C. is the high-end, luxury, lifestyle hotels that have the capability of competing for a much broader demographic. Business leaders and political leaders will find the luxury lifestyle hotels attractive," said Peebles, a keynote speaker at the Bisnow Lodging Investment Series East full-day conference Oct. 23. "It's the contemporary version of the Hay-Adams."

Peebles plans to break ground this fall on one of those new luxury hotels, the SLS Hotel at 901 Fifth St. NW. The 176-room hotel will be the first project featuring the high-end SLS brand in D.C. The luxury brand coming to Mount Vernon Triangle, plus several other high-end hotels coming to areas like the Southwest Waterfront and Union Market, marks a new era of the D.C. hospitality market that Peebles said would have been hard to imagine when he started in the business over three decades ago.

Before the 1980s, Peebles said, D.C.'s hotel market was centered around large-scale group hotels on the western side of town, such as the Omni Shoreham Hotel, the Wardman Park Hotel and the Washington Hilton. Then, in the early 1980s when the old D.C. convention center was built on the site now occupied by CityCenterDC, development shifted east and new hotels around the venue began to compete with the older hotels for group business.

During the late 1980s and early 1990s, Peebles said, another shift occurred, in which the size of hotels being developed began to shrink. Hotels were being constructed on corner and mid-block sites with much smaller footprints than their large-scale predecessors.

The real estate downturn caused by the Savings and Loan Crisis of the 1990s halted D.C. hotel development for a period, Peebles said, and it was followed by another significant shift. With the economy not supporting development of office buildings or high-end hotels, he said cheaper, select-service hotels were built on prime downtown sites. An example of this was the Courtyard by Marriott at Ninth and F streets NW, which Peebles converted from a vacant office building in 1992 and sold just last year.

The next wave to hit the D.C. market, Peebles said, was boutique lifestyle hotels opening in the 2000s. These hotels included the Hotel George and the Kimpton Hotel Monaco, which opened in 2002. Boutique hotels continue to open in the D.C. market, but over the past few years, there has been a significant rise of luxury brands entering the D.C. market. 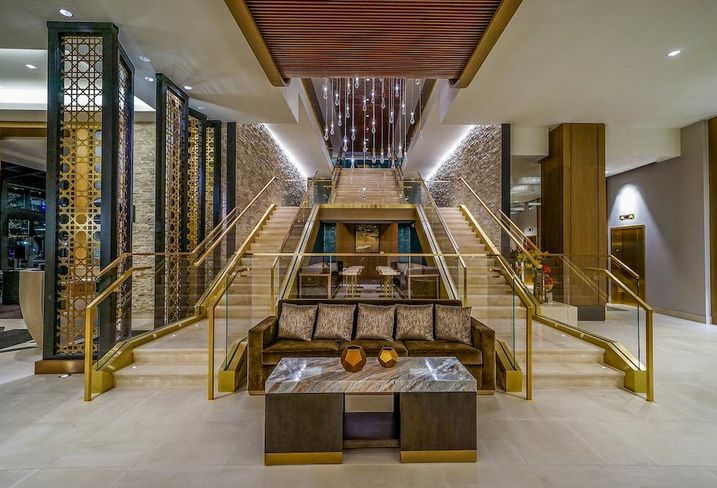 Courtesy: Carr Hospitality
The inside of the InterContinental hotel at The Wharf

The supply of luxury hotel rooms available in D.C. has grown by roughly 17% since August 2012, according to data firm STR. The next two tiers below luxury, defined by STR as upper upscale and upscale, have grown by a combined 19% in the last six years. This growth is not slowing down. STR identified another 2,400 hotel rooms under construction or in planning across the three high-end segments of the market.

One of the largest luxury hotels to deliver in recent years was the InterContinental Hotel at The Wharf. Developed by Carr Hospitality, the 278-room hotel opened in October 2017. The hotel was ranked the No. 1 D.C. hotel in Condé Nast's readers choice awards, released Tuesday, beating out the Four Seasons and the Trump International, another new luxury hotel that opened in 2016.

Carr Hospitality President Austin Flajser said he sees three reasons why luxury hotels have been on the rise in D.C.

The scarcity of land and high construction costs make it necessary to achieve high rates to get a return on investment. The perception of D.C. has changed from a government town to a more vibrant city with entertainment that brings in demand for high-end hotels. And the growing number of large-scale, mixed-use projects like The Wharf makes developers want to bring in the best hotel brands to complement the other components.

"If it's being built as part of mixed-use project, it's seen as being a part of placemaking," Flajser said. "You wouldn't want to build an economy hotel in the same project as a trophy office building. That's not to say there isn't room for both separately. But we're seeing it driven as a tool for placemaking and to support the cost of investment." 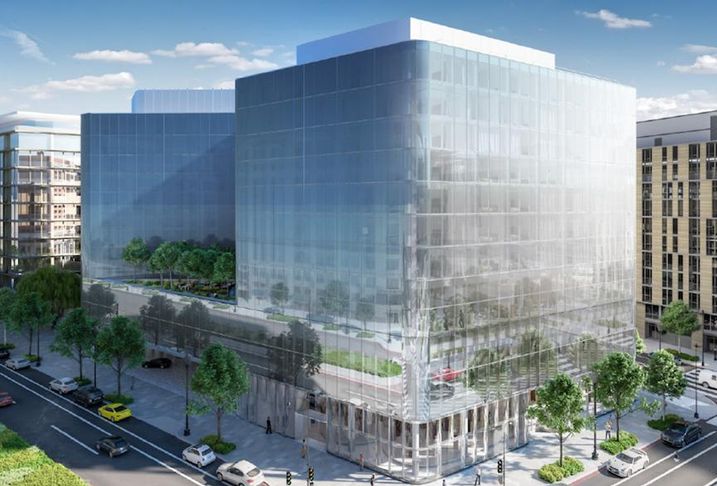 Another luxury hotel is under construction at CityCenterDC, the major mixed-use development on the site of the original convention center that brought D.C.'s hotel market to the East End. The Conrad Hotel will be the first property in D.C. with the luxury brand from Hilton. The 370-room hotel, featuring a restaurant from celebrity chef Bryan Voltaggio, is accepting reservations starting March 15, according to its website.

Two additional high-end brands have announced deals over the last year to open in D.C. neighborhoods not traditionally known for luxury hotels. In Northeast D.C.'s Union Market neighborhood, Virgin Hotels plans to open its first D.C. hotel, a 178-room project at 411 New York Ave. NE, next fall. In Southeast D.C.'s Capitol Riverfront neighborhood, Thompson Hotels signed on in March to bring its luxury brand to a 225-room hotel at The Yards development. 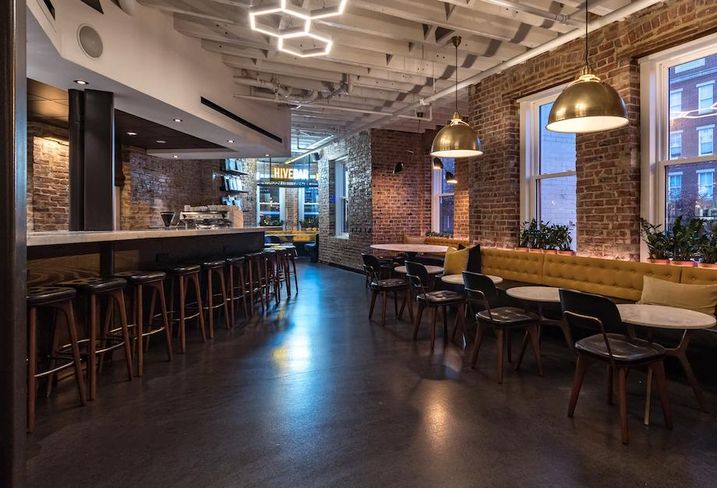 Abdo Development
One of the social spaces at the Hotel Hive

In addition to the growth of the luxury hotel market, D.C. developers see another major hospitality trend taking place in the city: an increased focus on social spaces over the hotel rooms themselves.

Abdo Development seized on this trend when it build D.C.'s first micro-hotel, the Hotel Hive in Foggy Bottom. With rooms from 125 SF to 250 SF, the hotel emphasizes its food and beverage offerings. It features popular pizza brand &Pizza and Hive Bar, which has an indoor lounge and rooftop bar.

The developer has achieved success with the first iteration of the brand, operating around 95% occupancy, and now is working to expand it nationally. Abdo is working on a Hive Hotel in Providence, Rhode Island, has two more planned in yet-to-be-announced cities, and ultimately has much larger ambitions, having secured trademarks for the brand in the U.S. and Europe. Abdo CEO Jim Abdo said the trend of growing social spaces is beginning to take hold of the larger hospitality market beyond just the micro-hotel concept.

"Even when you look at conventional hotels, they’re starting to rethink what their public spaces look like and how that interfaces with the hotel," Abdo said. "When you look at new generations that are going to be filling hotels going forward, you better take notice of this. You have to be fluid enough to recognize what the public is saying." 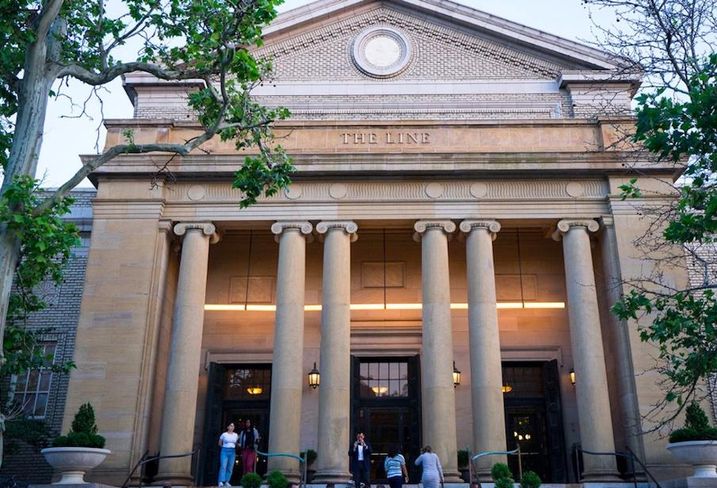 Sydell Group
The entrance to the Line D.C. Hotel in Adams Morgan

Foxhall Partners principal Matt Wexler also sees a growing trend toward public, socializing spaces happening in the D.C. hospitality market. The 220-room Line D.C. hotel, a redevelopment of a former church that Foxhall built with Sydell Group in Adams Morgan, represents a prime example of that trend. The hotel, which opened in December, features a large, public atrium with three restaurants, two bars and a coffee shop. It also has a community radio station that broadcasts live from the hotel lobby.

"Activating public spaces and making them feel welcoming, not just a place for hotel guests but for the community, that’s something from a neighborhood perspective that has been lacking in D.C. and now it's becoming somewhat fashionable," Wexler said.

Peebles, Flajser, Abdo and Wexler, plus executives from Hilton, Trump Hotels and other top hospitality companies, will speak Oct. 23 at the Bisnow Lodging Investment Summit East event at the Hilton McLean Tysons.