In office, it is all about drawing in tenants who will pay top dollar for a space they love. In the Bay Area, a main driver of amenities comes from what tech occupants are demanding, influencing even what goes into buildings with no tech tenants. If tech companies want it, you can be assured other, smaller tenants will be looking for the same thing.

But just what is in demand shifts over time, and panelists at Bisnow's Office West event this month discussed what it takes to attract tenants, get that lease signed and keep them around. There are two ways to command premium office rents: Be where people want to be or provide additional services, Probis Strategic Solutions principal Eli Khouri said. That is why the neighborhood where an office project is located can make such a difference.

If there is a vibrant community with plenty of restaurants, local gyms and other offerings, that can be a big draw and means the office doesn't need to allocate space for such amenities. If, however, it is a more isolated campus or in an area without a lot of choice, tenants will want more for their employees within the buildings, panelists said.

At NerdWallet's offices in Shorenstein's 1355 Market St., the company has the advantage of a mixed-use property that includes the businesses employees need, such as a pharmacy, bank and grocery store, Head of Workplace Operations Giselle Bonilla said. HKS Architects Vice President Jenny Hehemann said some building owners are adding amenities that not only meet tenant needs, but can help generate revenue, such as pop-up clinics.

Location is particularly important for smaller tenants, Swinerton Vice President Andrew Pearl said. They are not going to be able to compete with the big tech companies on amenities, but if they have a location where employees want to be, whether for access to transit or surrounding entertainment, that is a plus, he said. 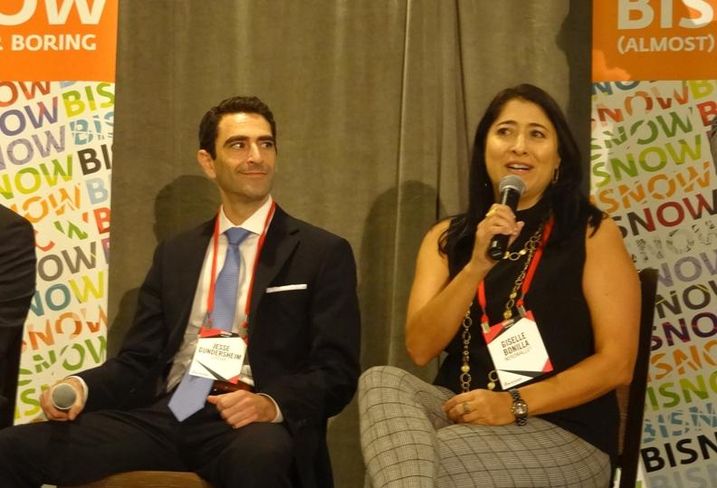 San Francisco's office market in particular is split into what is essentially two different markets. For large tenants looking for 100K SF or more, there are really only about five properties available, Avison Young Senior Vice President Kareem Barzegar said. For those looking for 15K SF, it is a completely different market. But everyone is demanding the same kind of amenities, regardless of size.

Several large tech tenants have taken over all of the office space in several high-rise buildings in downtown San Francisco, such as Salesforce Tower or Facebook's recent lease of Park Tower. These towers not only stand out against the city skyline, they also stand out for what lies inside. They essentially become vertical campuses for these companies in the heart of the city, Barzegar said.

At Park Tower, The John Buck Co. planned the building with a large tech tenant in mind. The amenities included weren't necessarily capital intensive, but rather allowed for flexibility so that a tech tenant could be there, but others could as well, John Buck Co. Principal Ben Kochalski said.

That included an area with cold storage and a loading dock for food delivery — an amenity that has long been a staple for tech companies, even though the city is now considering a ban on company cafeterias for new construction.

Banning such kitchens within corporate walls, the idea goes, would bring more employees into the surrounding community to eat, but panelists at the event said that logic was flawed. It goes back to the whole idea of location: If a neighborhood doesn't have such restaurants already in place and supported by the surrounding neighborhood, banning company cafeterias isn't going to change that. Another highlight of Park Tower is all of its indoor-outdoor space, which includes 14 skydecks, Kochalski said.

Outdoor spaces provide both a place to meet with others and a place to get away from the rest of the office.

Incorporating natural light and air are a big part of the shift toward employee wellness as a focus of the workplace, with wellness being tied more to productivity and starting to overtake sustainability when it comes to making decisions about what a building needs, Khouri said.

A focus on wellness can reflect company culture. Employees want to feel they are in a place with a culture that aligns with them, Pearl said. For example, Salesforce Tower has the Ohana floor on the very top level for meetings and community use, and meditation rooms on each floor.

It is particularly important to hit the right tone in collaborative workspace, since tenants are there for a relatively short time, Werqwise founder and CEO Alan Mackay said.

"People have to feel emotionally accepted when they come in the door," he said. "You've got to create that emotional reaction where people think, 'Yes, this is where I want to be.'"

In particular, that can be the challenge for large companies as they open small local offices with employees who are used to all of the amenities of headquarters.

"Providing a consistency of experience across the globe when you're not in control of the environment is a real challenge," she said.

The key, Williams and Mackay both noted, is finding ways to brand those spaces and make them about the tenant, not the provider of the space. There was some debate over whether coworking and flexible space companies were an asset or a liability for a multi-tenant building. In some cases, they can be an amenity in their own right, but that is not always the case, particularly when it comes to how a building operates.

"If you have a large, multi-tenant building and WeWork is not large enough to take the elevator bank in the building, it can create a lot of tension for other tenants," Kochalski said.

Coworking can be a strong plus for buildings with tech tenants that may grow quickly, mirroring the spec suites landlords offered in the past, Barzegar said.

"The coworking space is just a spec suite on steroids," he said.

But when coworking isn't a good fit for a building, it can cause anxiety and change the dynamics of the building, Barzegar said.

"There is a list of positives for having coworking space in your building," he said. "There's just a longer list of negatives."