Downtown Bethesda currently has three trophy office buildings under construction, with a fourth waiting in the wings, a wave of office development the area has not seen in a generation. Developers are already experiencing a robust lease-up pace, proving to them that office tenants have been waiting for new product to deliver in Bethesda for a long time. 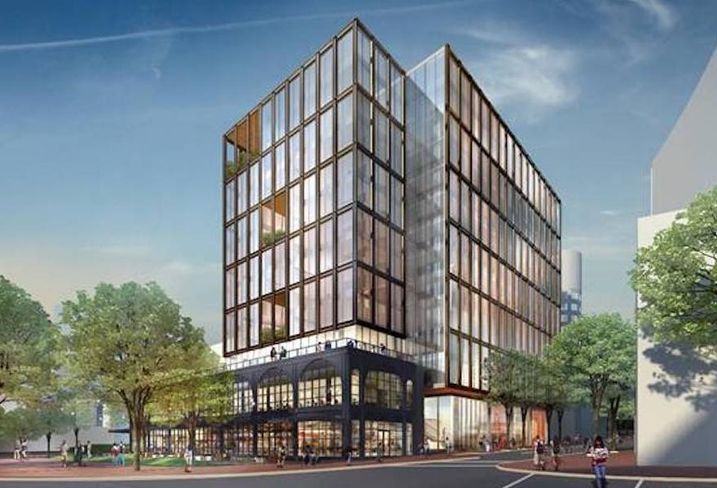 JBG Smith's 281K SF office building at 4747 Bethesda Ave. does not deliver until late 2019, but the project is already about 82% pre-leased. The developer has signed Host Hotels & Resorts, Booz Allen Hamilton and Orano and has committed to move its own headquarters to the project, leaving just one full floor of availability remaining.

"Bethesda really hasn't seen a new trophy building on this side of Wisconsin [Avenue] in 20 years," JBG Smith Executive Vice President of Development Kristi Smith said. "There was definitely pent-up demand for it."

Smith, who will speak at Bisnow's Future of Bethesda event July 26, said the dozens of retailers across the street at Bethesda Row have also proved to be a major draw to the project. She sees Bethesda's center of gravity moving south with Bethesda Row as an anchor, the Purple Line coming in 2022 and JBG Smith and Carr Properties both building major developments.

"Our location in Bethesda is unparalleled," Smith said. "We're right at the base of the new Purple Line station. We really believe our building is at the new Main and Main in Bethesda." 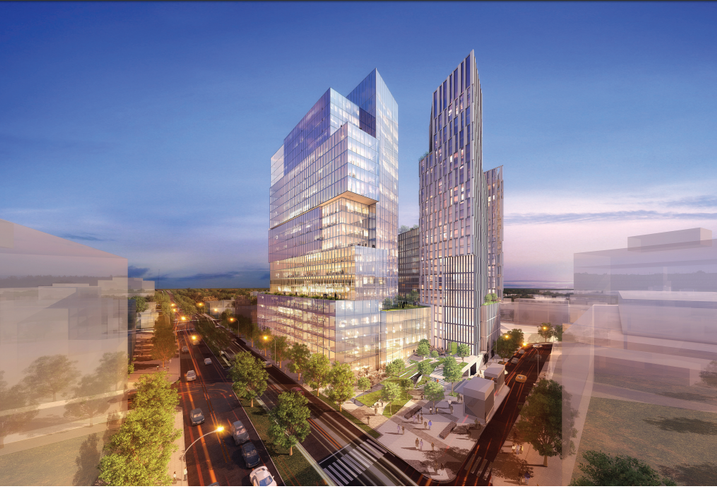 Directly to the north of JBG Smith's project, Carr Properties is underway with its two-building, 300-foot-tall Apex Building development. The developer is currently building the underground parking structure and shell for the Purple Line station under its project, and expects to be back to ground level by December, with final delivery projected for the summer of 2020.

Carr has just unveiled new branding for the project. The 360K SF office tower will be called The Wilson, named after the Wilson's General Store that opened on the site in 1890. The 460-unit residential high-rise will be called The Elm, named for the street which runs alongside it.

The developer signed WTTG Fox 5 in a deal that was made public in September, but Carr Properties CEO Oliver Carr III said it just officially closed last week. The D.C. Fox affiliate will move from Tenleytown to a 57,500 SF space in the building. Carr said he is in talks with other tenants that could bring the building to two-thirds pre-leased in the coming months.

"In the Bethesda market, tenants are starving for a better experience and better workplace and our project will deliver that," Carr said. 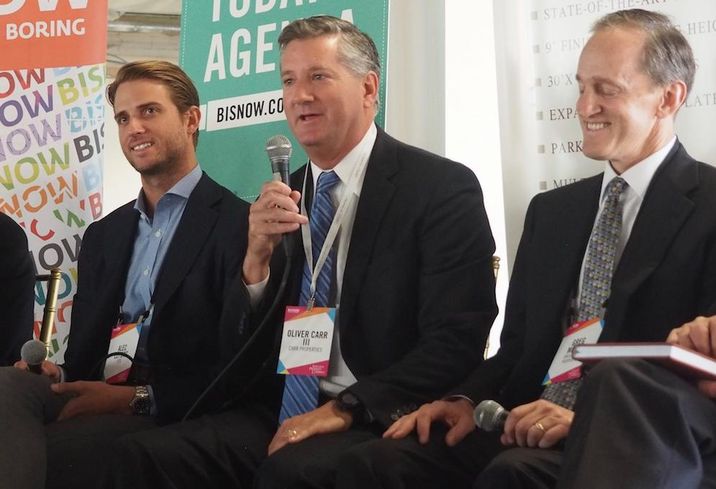 Carr said many of the tenants he has seen actively looking to move to Downtown Bethesda are coming from more suburban parts of Montgomery County like the Rock Spring office park, the suburban property Marriott International will depart when it moves to Bernstein Cos. and Boston Properties' Downtown Bethesda site. The development team broke ground on that project, which will include a 785K SF office tower and a 244-room hotel at 7750 Wisconsin Ave., last month.

"The Marriott move helps to validate Bethesda as a great place for a Fortune 500 company," Carr said. "I think you'll see other large corporate tenants move inbound to Bethesda."

The last office building to deliver in Downtown Bethesda, the 228K SF building at 4500 East West Highway, was also built by Carr Properties in 2014. Before that, Carr said it had been over a decade since a new office building delivered in the submarket.

The market has changed substantially in the four years since he delivered that last building, Carr said. Downtown Bethesda office rents in 2014 were in the low $50s/SF, Carr said, and new buildings now are leasing in the mid-$60s and even the low $70s.

"We've seen a big increase in rents in the market as the Bethesda market has tightened and best-in-class office product is built," Carr said.

Bethesda's surge of office supply is part of a larger influx of new projects along Maryland's Purple Line corridor. While no office buildings delivered in Suburban Maryland last quarter, despite D.C. delivering a record amount of office space, the area is preparing for an office boom. The Suburban Maryland market has 2.6M SF of office under construction, according to CBRE's Q2 report, the highest level on record.

"There’s definitely pent-up demand for the highest-grade space in Bethesda," CBRE Research Manager Wei Xie said. "If you look historically, we have not had a major delivery in Downtown Bethesda for a very long time. Once its here there’s definitely going to be demand for it." 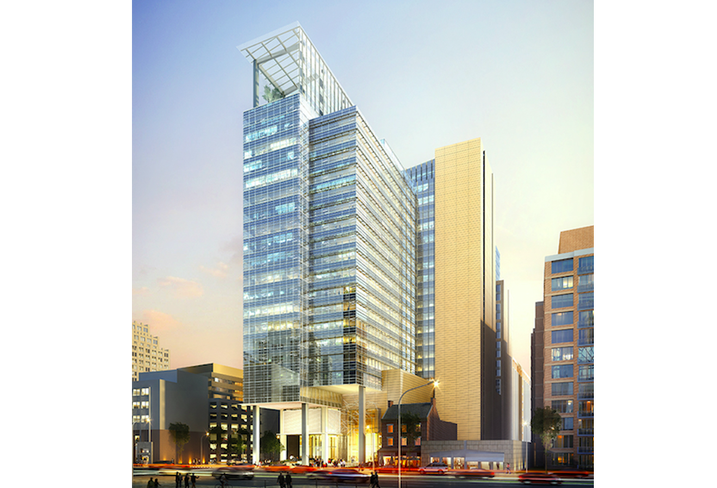 Courtesy: Stonebridge
A rendering of Stonebridge's proposed office and hotel development in Bethesda

Following the JBG, Carr and Marriott projects, the next office building planned in Downtown Bethesda is from StonebridgeCarras and OTO Development. The developers are planning a 250-foot-tall mixed-use project with a 390K SF trophy office building and a 219-room AC Hotel by Marriott, which signed on as the flag in November.

The $300M project will be built on the site of the Second District Police Station at the corner of Wisconsin and Montgomery avenues, across from the Bethesda Metro station. As part of an exchange with the county, StonebridgeCarras is building a new police station at 4823 Rugby Road.

The developer plans to demolish the existing building in Q4 and begin construction early next year, with an expected delivery in April 2021. StonebridgeCarras principal Doug Firstenberg said he is excited about the leasing activity JBG Smith and Carr have experienced at their projects, and he expects the demand will be enough to fill his development.

"You've had a lot of tenants that haven't gotten into new buildings and haven't been able to right-size," Firstenberg said. "Over the last couple years, several tenants have had to go down to Friendship Heights as there was no space in Bethesda."

StonebridgeCarras is also planning a $100M, 175K SF lab building with The Donohoe Cos. at 8280 Wisconsin Ave., aiming to bring the county's red-hot life sciences market from the 270 corridor to Downtown Bethesda. But after StonebridgeCarras' projects, the developers do not see any other projects on the horizon, so Bethesda's office market could let out a loud three-year roar and then go back into hibernation.

That pause will likely be good for the market, Carr said. He expects there will be enough demand to support the currently planned projects, but does not know how much longer after that it could continue.

"It's a small market and it typically has not been the domain of large companies," Carr said. "It's typically more of a 20K SF tenant market. So there is a risk of overbuilding. I think a more measured approach given the boutique size of the market makes sense."

Smith, Carr and Firstenberg, plus representatives from Marriott and its development team, will discuss the Bethesda market at Bisnow's Future of Bethesda event, July 26 at the Hyatt Regency Bethesda.