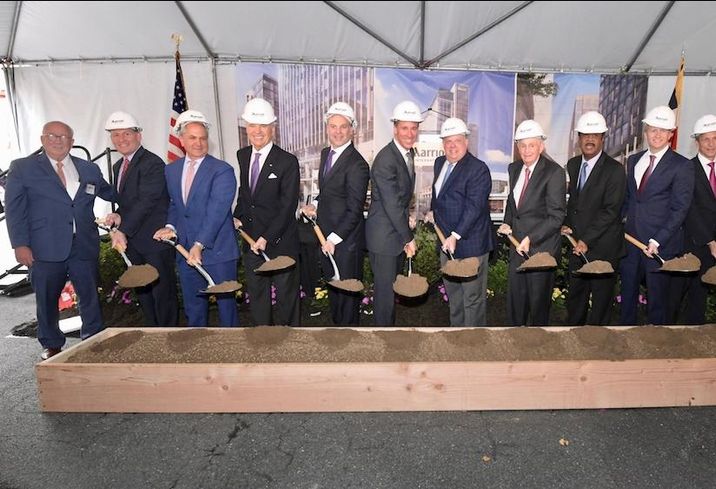 Courtesy: Bernstein Cos.
Maryland Gov. Larry Hogan celebrating the groundbreaking with executives from Marriott International, Boston Properties and Bernstein Cos.

The hotel giant in January 2017 selected Bernstein Cos. and Boston Properties to build it a new headquarters at 7750 Wisconsin Ave., moving from a suburban-style campus to a 21-story tower two blocks from the Bethesda Metro station.

“This location places Marriott in the heart of a vigorous, educated and diverse community," Marriott CEO Arne Sorenson said in a release. "We firmly believe downtown Bethesda is a vital economic engine with a very bright future and a great place to call home.” 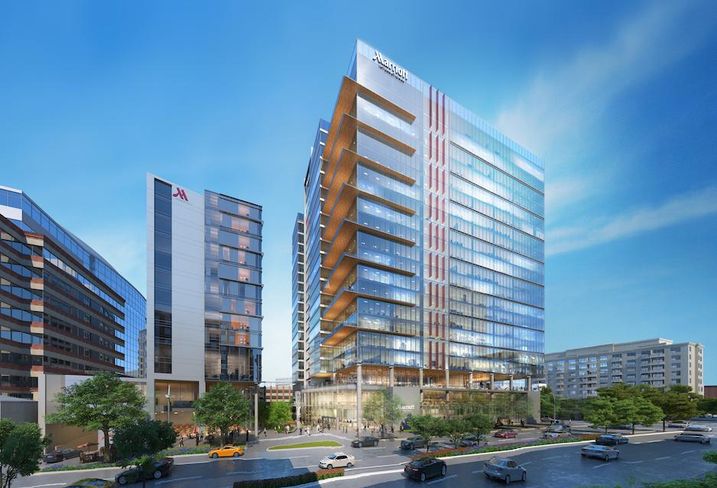 Courtesy of Gensler
A rendering of Marriott International's planned HQ and adjacent hotel in Downtown Bethesda, being developed by Bernstein Cos. and Boston Properties

The $600M development will include the 785K SF office tower and a 244-room Marriott hotel with over 8K SF of meeting and ballroom space. The hotel will also have a coffee shop, a rooftop bar and lounge and a ground-floor restaurant with outdoor seating. The hotel is expected to open in early 2022 and Marriott plans to move into its new headquarters in mid-2022.

Bernstein will construct the hotel and will partner with Boston Properties on the office building, designed by Gensler. Boston Properties is working on several major office buildings across the region, including projects for Fannie Mae and Leidos in Reston, the Transportation Security Administration in Springfield and law firm WilmerHale in Foggy Bottom.

"Today is about persistence, progress and great partners," Boston Properties Senior Executive Vice President Ray Ritchey said. "Marriott International set the standard, Montgomery County and Maryland provided the push and the Bethesda community encouraged us to create something special here. We can't wait to get started."