Can Capitol Riverfront Be The Next K Street?

The Capitol Riverfront's multifamily market is booming, but, like every submarket in the region, it is hungry for new office tenants. 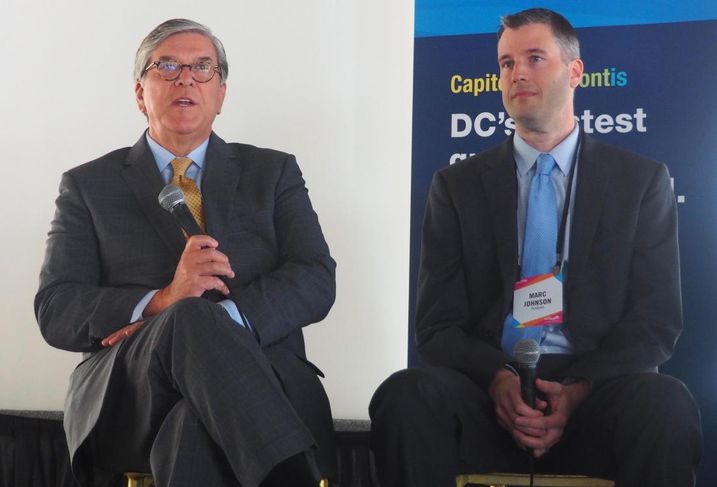 At Bisnow's Booming Capitol Riverfront event Thursday morning, panelists said to expect lobbying groups and trade associations to start moving away from the CBD toward the riverfront market.

Last April, the National Association of Broadcasters became the first to make this move, relocating from Dupont Circle to Monument Realty's new Capitol Riverfront building on M and South Capitol.

NAB CEO Gordon Smith, a former US Senator, said it is vital for those in the advocacy business to be within minutes of Capitol Hill to be able to connect with policymakers.

"This is the last area that’s developable with reasonable proximity to the Capitol, where the decisions are made that affect your industries," Gordon (left) said. "I would be very surprised if other associations did not do what we're doing." 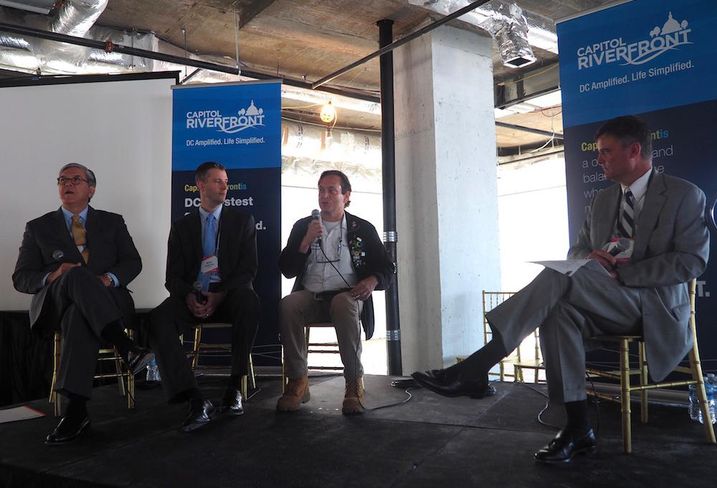 Skanska's Marc Johnson, who is building the 220k SF 99 M St SE office building in the Capitol Riverfront, says he is seeing this trend as he looks for tenants to fill the trophy project.

"We see this as the maturation of the market, we're looking at tenants that aren’t typical to this market," Marc, second from left, said. "We're looking at groups that were considering the CBD and East End that are now seeing the waterfront as a great opportunity."

Gordon and Marc sat on the office panel next to the head of another major company building its HQ on the Capitol Riverfront, DC Water's George Hawkins. Monument Realty's Doug Olson moderated the panel. 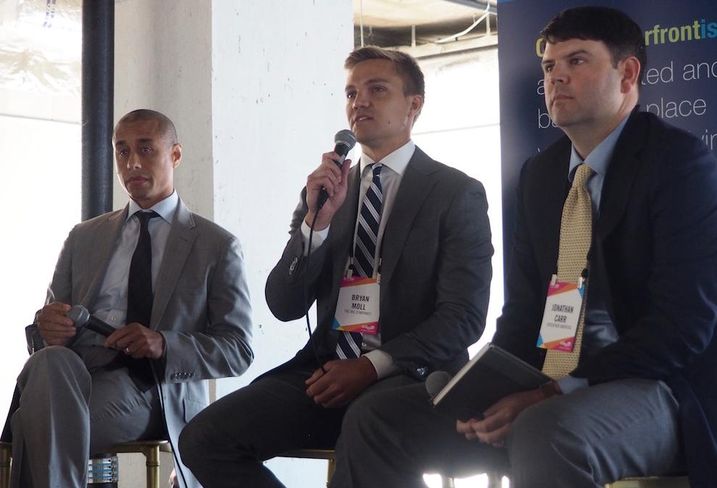 On the multifamily side, construction has been soaring. With the influx of upcoming apartment supply, developers could naturally feel competition between each other to attract tenants, but they say that is not the case.

"There's the saying that a rising tide lifts all boats, and I think, in this neighborhood in particular, that's the case," Bryan said.

JBG is working with Jair Lynch, who is also developing a Half Street mixed-use building, to create a vibrant streetscape that will draw people to the neighborhood even when the Nationals aren't playing.

"I think Capitol Riverfront is poised to actually have more units, as long as we're doing it in a thoughtful way and we're collaborating, the retail is going to bring life to the street," Jair, left, said. Grosvenor's Jonathan Carr, right, moderated the multifamily panel. 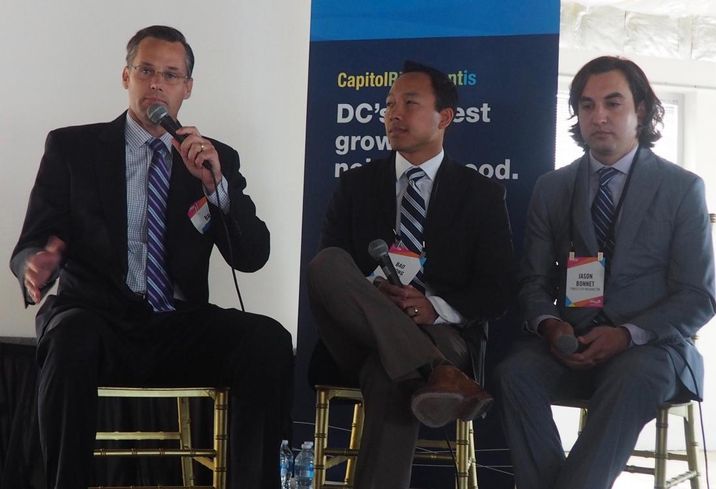 WC Smith delivered the 429-unit Park Chelsea in April and SVP Brad Fennell says they have been averaging more than 35 leases signed per month. He's not concerned about multifamily oversupply.

"We've been very happy and surprised by absorption to date," Brad, on the left next to PN Hoffman's Bao Vuong and Forest City's Jason Bonnet, said. "We know that its between us and Arris with lots of product coming into the market, but I think that product is staged year by year." 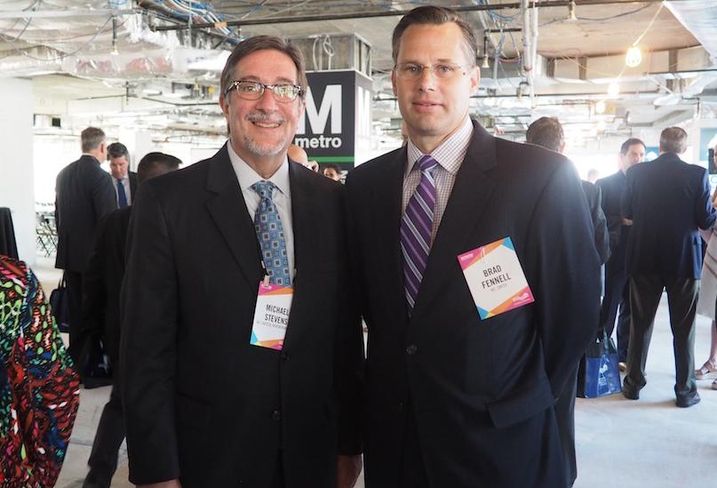 During the event's breakfast and network session before the panels, Brad posed with Capitol Riverfront BID president Michael Stevens. The BID, which sponsored the event, puts on concerts every Friday aimed at creating a sense of community on the riverfront. 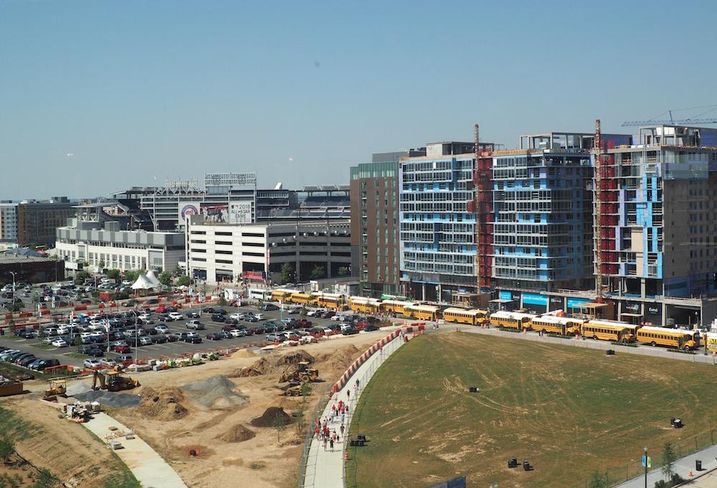 The crowd of 350 listening to developers talk about the construction happening around Nats Park didn't have to use their imagination. They were treated with this view from the ninth floor of WC Smith's Federal Gateway Office building at 1100 New Jersey Ave SE. 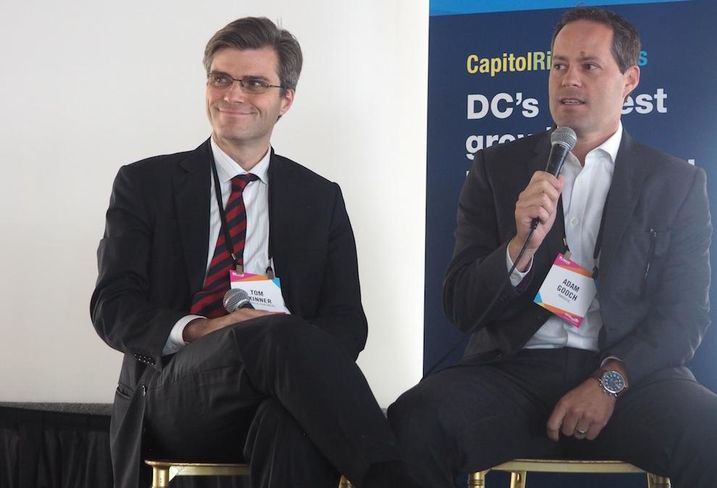 While the guys on the multifamily panel were focused on short-term housing demand, the next panel, on Buzzard Point, was thinking long term, looking five to 10 years down the road.

Akridge owns a big plot of Buzzard Point land south of the DC United Stadium site where it has 2.5M SF of development rights. SVP Adam Gooch (right, next to Redbridge's Tom Skinner) says there is concern about access to the area if the stadium doesn't provide a street cutting through the site to the southern tip of Buzzard Point.

"We've been working with the office of planning and the BID to really make sure that access remains," Adam said. "That’s going to be a key determinant of the success and viability of our land down to the south." 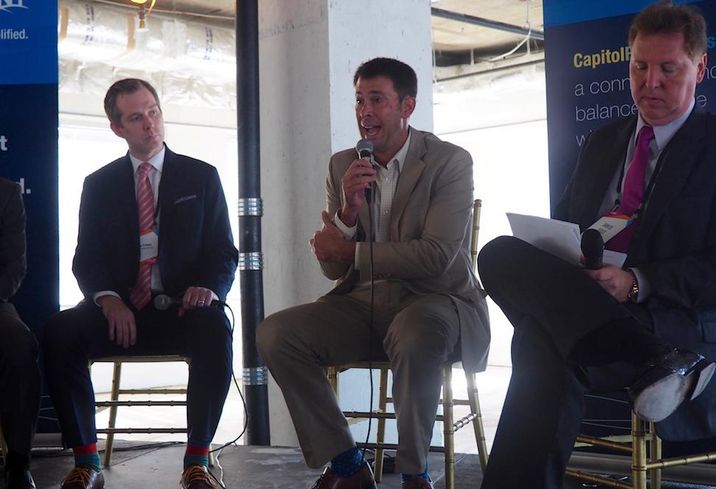 MRP Realty's John Begert (center, between Bohler's Mike O'Hara and moderator David Fuss from Wilkes Artis) noted the difficulty of estimating apartment rents so early on in Buzzard Point's development. He used the leasing success of MRP's Dock 79—which will deliver next month and has already leased 59 units with river views—to explain why investors are bullish on Buzzard Point's multifamily potential.

"There's just nothing to compare to having the ability to lease an apartment unit in the city with great views of the river," John said. "That’s what's driving a lot of investment at Buzzard Point right now."