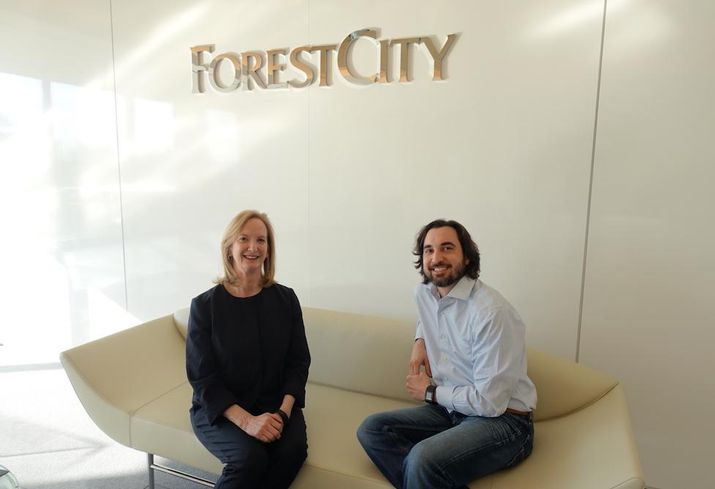 Forest City is at the forefront of Capitol Riverfront's revitalization. Its 48-acre mixed-use project The Yards is being built over the span of two decades and will ultimately include 3,400 apartments, 1.8M SF of office and 400k SF of retail. We spoke with Forest City Washington president Deborah Ratner Salzberg and development director Jason Bonnet about the development of this megaproject and the changing neighborhood.

Bisnow: How has the neighborhood evolved since Forest City began working on The Yards?

Ratner Salzberg: I think the reality is that Capitol Riverfront has been very strategically planned. It started with our developments, the Department of Transportation and JBG, and the decision by the Navy to enhance the facilities. We came in with a very strategic plan which actually was the vision of Eleanor Holmes Norton to bring the neighborhood to the water and to bring DC residents to the water. This meant our park was critical to the development, the open space and how we built that open space. For us, the neighborhood really began with the park. Before others were coming in droves, the park created a sense of place and was welcome to everyone in the neighborhood and District. The baseball stadium brought many players into the market, with the combination of The Yards and the stadium, the neighborhood really has flourished.

Bisnow: How do you manage such a long-term project in such a rapidly changing neighborhood? Does it present any challenges?

Ratner Salzberg: I don’t think so. What we have tried to do is create a neighborhood. People talk about placemaking, but creating a neighborhood is not necessarily placemaking. It's great outdoor space, people of all ages, a grocery store, service retail, authentic local retailers; all of these combine to make a great neighborhood.

Bonnet: The vision here at The Yards has been strategic from the get go. We started in 2004 and managed it through phases, three phases of 6M SF. If you step outside of The Yards and look at the rest of Capitol Riverfront, it's tracking along with us as well. All of the other developers are approaching the end of Phase 1. Both The Yards and Capitol Riverfront are approaching the end of Phase 1 and still have two more to go. You've always got the question of oncoming supply but we're in a very hot neighborhood, the city center is moving toward the water and that's Southeast DC.

Bisnow: How do you give an authentic feel to a neighborhood that's being developed all at once?

Ratner Salzberg: All of us pay attention to what’s going on in the neighborhood. We recognize everything's not the same and we need each building to appeal to a different demographic. We didn’t want everything to look like it was built at once, we use historic buildings and different architects.

Bonnet: If this project is successful, in 2030, when you walk around, it will look like any old neighborhood in DC.

Ratner Salzberg: We have a lot of people who touch this project. To make it special we do use different architects. We go for a different feel in each of the different buildings. When we were looking for retail tenants we took the time to make sure, and we brought Neighborhood Restaurant Group and Bluejacket, a brewery, in the first building. Our first white-table restaurant was Osteria Morini, who came down from New York. We spent a lot of time curating the retail with chef-driven restaurants and neighborhood restaurants.

Bisnow: How is the Arris lease-up going? Is it keeping up with the same pace as the previous buildings?

Bonnet: It has been going great. Foundry lofts' 170-unit lease-up was less than six months, the fastest in Forest City history. Arris is 327 units and it's over 80% leased now. We expect the project to be leased up and fully stabilized in two to three months. It is a leader in the market in terms of rents. We're not only achieving a faster pace than we anticipated, we’re also achieving top of market rents. We thought because the building had the opportunity of being centrally located, smartly amenitized and a level of design not seen in the DC market, that we were able to achieve a top-tier building at the rents we are.

Bisnow: How is construction going on Parcel O? Any update there?

Bonnet: Construction is going well. It’s a big hole in the ground right now. On the north end of that it's 138 condo units from PN Hoffman; we’re doing the south side, which is 191 residential units delivering next fall. The condo units will start their sale this spring. For all of our multifamily product, 20% of units are [for residents earning] 50% area median income. One other project we hope to break ground on this summer, Parcel L, will be 264 apartment units on the south side. On the north side it will be a four-star boutique hotel that will be new to market. We have not named a brand yet, hopefully that will come in the next 30 days.

Bisnow: Capitol Riverfront has the most units delivering of any neighborhood this year, do you worry at all about oversupply?

Ratner Salzberg: We clearly watch absorption closely. We are thrilled with the speed at which units here are being absorbed. We are at a good price point and have a unique product. This is not a hustle-and-bustle area. People come here and have the advantage of the amenities and the advantage of being on the water. You can’t underestimate the impact of being on the water.

Bonnet: This is a young neighborhood, it's a hot neighborhood. Even though people are still learning about it, it is still a growing neighborhood. Although there may be this supply coming over the next 12 to 18 months it will be absorbed. Supply is good because it grows the population. The more people that are here, the more retailers will be here and it continues to be this great place on the water. It's a win-win for everyone.

Bisnow: Much of what you’ve done at The Yards has been multifamily. How will you decide when is the right time to build more office in Capitol Riverfront?

Ratner Salzberg: Office really was scheduled to be our third phase. We’re now talking to tenants about prospective office, and we now expect it will be before Phase 3. I would say it would be any time between now and the next two to five years.

Bisnow: Where do you see this neighborhood five or 10 years down the road?

Ratner Salzberg: Long term, this is going to be, I think, from The Yards to Buzzard Point to The Wharf, one wonderfully extended neighborhood and an area of the city just as we think about 14th Street, Georgetown or Foggy Bottom. This will be a remarkable neighborhood with all sorts of activity, different types of activity and different types of people. It will be incredibly vibrant and will maintain its mixed-income mixed-use waterfront character.

Bonnet: If it's not already, it has got the foundations and the grounding of a world-class neighborhood in a world-class city. It's in the nation’s capital, [which] is fully diverse and inclusive and it is the best of the best on the water. You’ve got not just the Nationals, you’ve got DC United and you’ll have all these residential neighborhoods, whether its The Yards, Buzzard Point or Poplar Point. It’s this new kind of connection back to the water that has been missing for so long. Now that is being developed and the waterfronts are being opened to the residents of the city. It's something the city hasn’t seen for so long. Now that it's here people are going to engage it like we’ve never engaged it before.