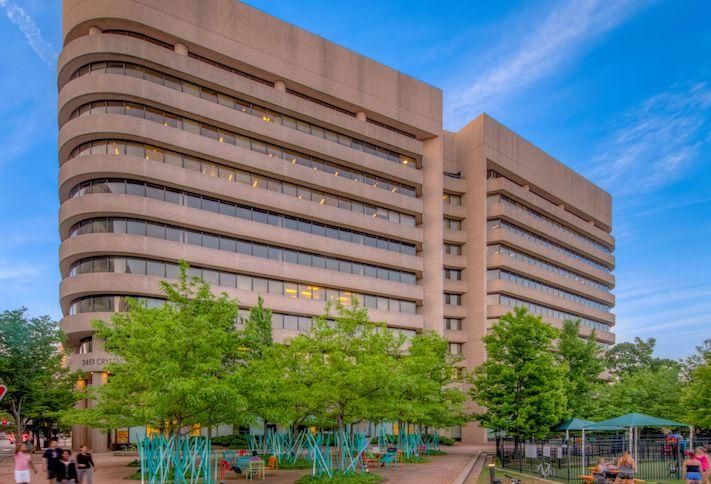 Courtesy of JBG Smith
The office building at 2451 Crystal Drive.

The coworking concept CBRE launched in late 2018 has chosen the same neighborhood as Amazon HQ2 for its first East Coast location.

The lease includes a revenue sharing agreement with the landlord, a JBG Smith spokesperson said, and Hana members will be integrated into JBG Smith's customer experience network. CBRE plans to have the location open within the year.

Hana opened its first coworking space in Dallas in August, and it has announced additional locations in London and Irvine, California. Hana CEO Andrew Kupiec told The Wall Street Journal early last year he plans to expand to 25 markets over the next three to four years.

The company's growth comes as coworking leader WeWork — which has a large coworking operation and one of only two WeLive locations in another JBG Smith building a few blocks away — is slowing its leasing pace and reportedly looking to back out of some deals after its failed IPO in August.

A host of other coworking providers, including Industrious, Convene, Spaces and Knotel, have grown their D.C.-area footprints, making the market for coworking members increasingly competitive.

In Tuesday's announcement, JBG Smith highlighted the financial strength and tenant relationships Hana benefits from as a subsidiary of CBRE.

Ritchey added that bringing in the coworking space gives JBG Smith's other tenants the ability to scale with flexible offices. The company owns a large portfolio in the newly christened National Landing neighborhood, where Amazon has begun moving its employees into leased space as part of its second headquarters.

The tech giant received approval last month for HQ2's first phase of ground-up development, which JBG Smith is managing while building a host of its own mixed-use projects planned for the neighborhood.

The 11-story 2451 Crystal Drive, where Hana is opening, features a recently renovated lobby, a fitness center, a child care facility, a café and a bike storage room. It sits about a half-mile from the Crystal City Metro station.

"Hana is thrilled to partner with JBG Smith for our first East Coast location at National Landing surrounded by fantastic amenities available to Hana members and a drastic transformation occurring in the neighborhood," Kupiec said in a release. "We believe our unique flexible space solution, coupled with National Landing's array of live, work and play offerings, will provide Hana clients a premier workspace to attract and retain top talent."