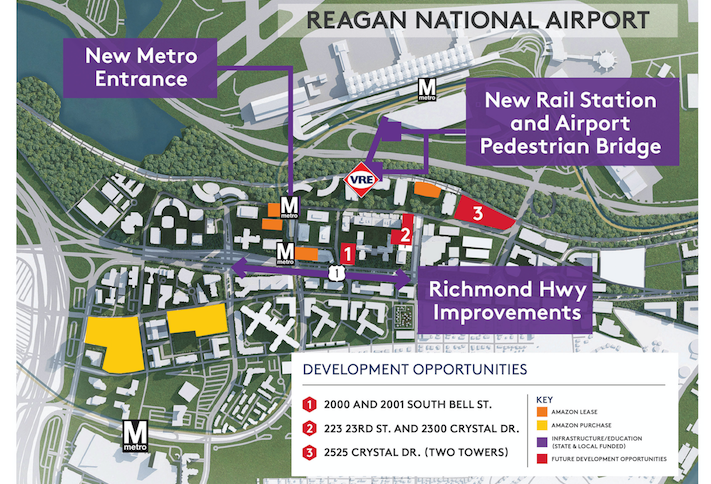 The developer announced Tuesday it filed plans with Arlington County to redevelop 2.6M SF across five multifamily buildings and one office building in the area it has branded as National Landing.

The buildings are located at 2000 and 2001 South Bell St., 223 23rd St., 2300 Crystal Drive and 2525 Crystal Drive, which consists of two towers. They are part of the extensive portfolio of aging Crystal City buildings that became part of JBG Smith's portfolio with the 2017 merger of The JBG Cos. and Vornado.

The redevelopment of the buildings will follow the two multifamily projects JBG Smith is already moving forward with in the area. The developer plans to begin construction next year on 1900 Crystal Drive, which will bring 750 new multifamily units across two high-rise towers. It also filed plans in July to add nearly 1,000 units to the RiverHouse community in Pentagon City.

These plans combined total over half of JBG Smith's 6.9M SF of future development pipeline in National Landing. The pipeline is ultimately slated to include up to 5,000 multifamily units and 2.2M SF of office in addition to the new Amazon buildings, for which it is serving as a development partner. JBG Smith is also under construction on its Central District Retail redevelopment.

The latest redevelopment plans include public benefits such as open spaces, improved pedestrian infrastructure and transportation upgrades. JBG Smith plans to work with the county on the final designs for the public benefits during the entitlement phase.

"In reimagining this vital stretch along Crystal Drive and 23rd Street, we are focused on the goals of Arlington County's Sector Plan, as well as our collective desire to foster a vibrant, architecturally distinct 18-hour environment throughout National Landing," JBG Smith Executive Vice President Bryan Moll said in a release.