While leasing activity has been robust to start the year, the NYC property market is still sifting through the rash of closings that happened just before the end of 2016, including a major downtown hotel trade. 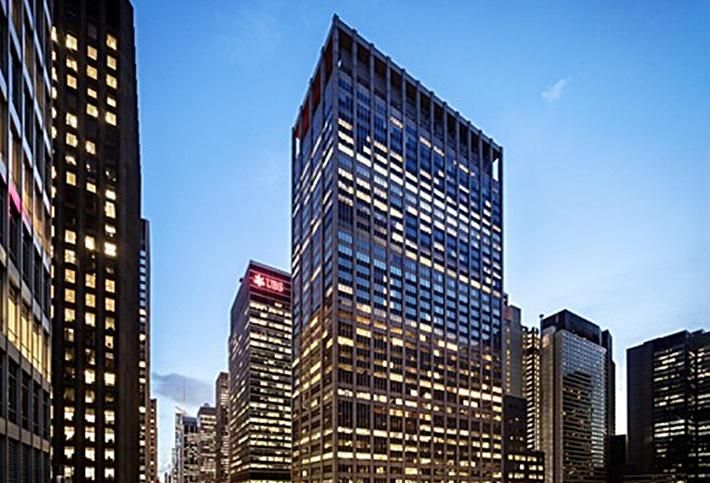 Paramount Group signed Swiss insurance firm Swiss Re to occupy 68k SF at its 1.7M SF 1301 Avenue of the Americas in Midtown (above). Swiss Re is shrinking its footprint by 28%, vacating the 93k SF office it occupies at Fisher Brothers’ 55 East 52nd St. JLL’s Robert Martin and a Colliers team repped Swiss Re. JLL’s Frank Doyle, David Kleiner and Clark Finney, along with Paramount’s Peter Brindley, repped the landlord.

The biggest lease of the past week broke just this morning, when The Durst Org snagged financial technology firm SS&C to 140k SF at 4 Times Square, in a deal that will fill a decent chunk of Condé Nast’s vacated space.

Artificial intelligence firm IPsoft is growing, and its new lease makes it a member of the six-figure-square-foot club. Landlord RFR announced this week it signed IPsoft to a 140k SF lease, a renewal and expansion from its 97k SF office at 17 State St in the Financial District. The deal will run for 11 years, and it was brokered by RFR’s A.J. Camhi and JLL’s Mitchell Konsker on the landlord side and Cushman & Wakefield’s Rob Lowe for IPsoft.

AlphaSights, a London-based business information firm, has signed a lease with RFR to take a spread in the 12th, 14th and 15th floors at 350 Madison Ave. AlphaSights plans to occupy 46k SF, more than doubling its current footprint, a 22k SF office at 229 West 43rd St. RFR’s A.J. Camhi was the in-house rep, working with a JLL team led by Alexander Chudnoff, while Cushman & Wakefield’s Augustus Field, Jon Herman and Rob Lowe were on the tenant rep team. Asking rent was $75/SF. 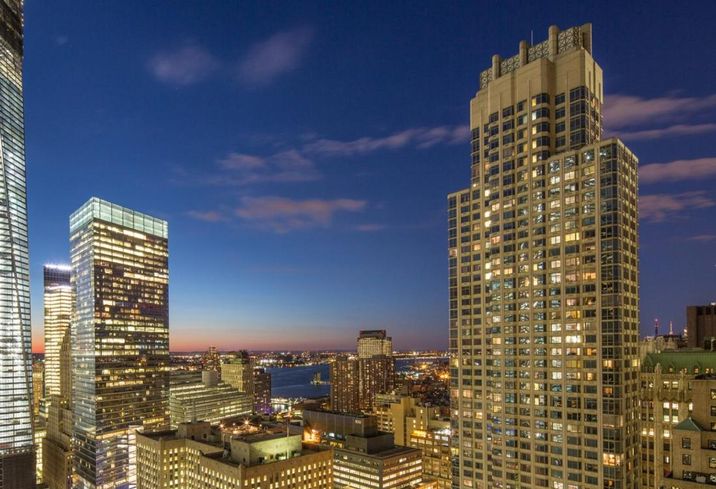 L&L Holding’s 195 Broadway (above), the former AT&T world HQ, signed Abrams Publishing to a 42k SF lease. Abrams will take the entire ninth floor of the property, which is undergoing a $50M retail upgrade as it prepares to welcome Nobu and Anthropologie in the next few months. C&W’s Mark Magnell and Dan D’Agnes repped Abrams while L&L’s Andrew Wiener led the in-house leasing team. Asking rent was $56/SF. Abrams will move from its offices at 115 West 18th St in Q3.

Brazilian Banco Bradesco has re-upped its lease for the top two floors at Oxford Properties Group’s 450 Park Ave. The spread is for 22k SF and the Sao Paulo-based bank will stay there until 2031. Aaron Schreier, Jonathan Schindler and David Mainthow repped Banco Bradesco, and CBRE’s Paul Amrich and Neil King repped Oxford. 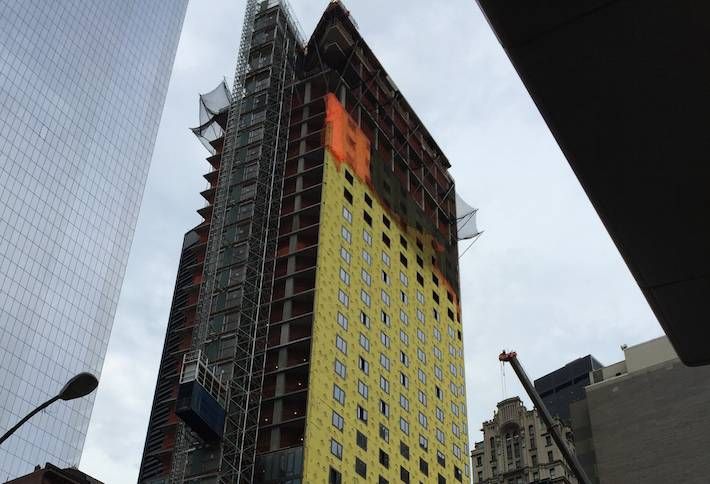 Construction on the Courtyard WTC hotel in Lower Manhattan

In the biggest sale of the week, Union Investment Real Estate GmbH paid Hidrock Properties $203.3M for the Courtyard Marriott at 133 Greenwich St (above, pictured after it topped out). Union, a subsidiary of German DZ Bank Group, paid about $650k per key for the 31-story hotel, which delivered in early 2016. Eastdil Secured’s Adam Etra repped Hidrock in the trade.

Helen Keller Services for the Blind has found a buyer for the 96k SF 57 Willoughby St in Downtown Brooklyn, more than a year after putting the building on the market. Meadow Partners, owned by former Westbrook Partners chief Jeffrey Kaplan, picked up the 200k SF property for $54M. The building will likely be redeveloped.

JPMorgan Chase has sold 1002 Brighton Beach Ave in Brooklyn, one of its Chase Bank locations, to Queens-based Laundry Capital Co for $11.4M.

A 7,200 SF retail building at 507 West 24th St has traded hands for $10.8M. SR Capital built the property, under the High Line, as an interim home for Lisa Spellman’s 303 Gallery before it moved into its permanent digs at SR’s 551 West 21st St condo tower. Premier Equities closed on the property just before the new year, paying $1,500/SF.

An affiliate of A&E Real Estate Management has picked up unit 42 in 80 Woodruff Ave, an elevator multifamily building near Prospect Park in Brooklyn, for $10.5M. The seller is listed as Woodruff Avenue 80 LP. 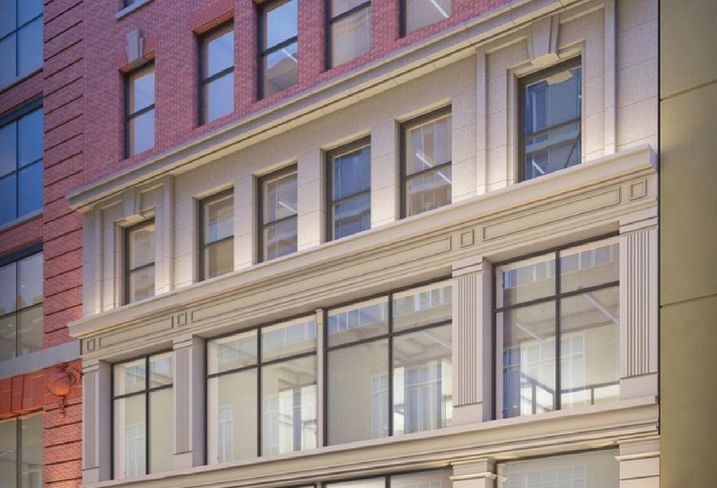 Larry Gluck’s Stellar Management received a $110.4M mortgage for 666 West End Ave from New York Community Bank, refinancing a $114M loan on the property. Stellar came under fire in 2014 for banning rent-stabilized tenants from using the pool in the building, called the Windermere.

Meyer Chetrit has picked up an $84.5M loan for his redevelopment of the Mary Immaculate Hospital in Jamaica, Queens. The Chetrit Group bought the property for $4.8M in 2009 and plans to redevelop it into a 786k SF multifamily property.

Bradley Korman and his family’s firm, Korman Communities, secured a $68M loan from the Canadian Imperial Bank of Commerce for the AKA Central Park extended stay HOTEL. The loan refinances a $61M loan on the property and matures in five years.

At 223 West 28th St, HAP Investments consolidated two loans on adjoining parcels, one for $16M and one for $45M, into one $61M loan to fund the development of a planned rental-condo project in Chelsea.

Vornado has closed on a $53.6M construction loan for its Starbucks-anchored mixed-use project at 61 Ninth Ave. The 165k SF project will have the largest Starbucks in the world, and Vornado has already begun excavation work on the Meatpacking site. The financing came from German bank Landesbank Hessen-Thüringen, better known as Helaba.

The One Flushing affordable housing project has secured its city financing and can proceed with construction. In two separate loans, the NYC Housing Development Corp and the City of New York loaned developer Monadnock Development $45.3M and $42M, respectively. The funds will go toward the 10-story, 232-unit affordable development at 40-48 Main St.