Starwood Property Trust and Starwood Capital Group have confirmed their previously reported agreement to acquire LNR Property from Aozora Bank, Cerberus Capital Management, iStar Financial, Oaktree Capital Management, and Vornado. Starwood Property gets the special servicing, investment securities, Archetype Mortgage Capital (conduit originations), Archetype Financial Institution Services (small balance loans and asset acquisitions and management), LNR Europe, and half of LNR's interest in Auction.com for $856M, and Starwood Capital will take the US property group and the other half of LNR's interest in Auction.com for $197M. The deal is expected to close next quarter.

Tavros Capital Partners USA has borrowed $18.5M in a five-year, fixed-rate loan arranged by HFF's Steven Klein to buy the 28-unit Chelsea Muse apartments (plus 18k SF of retail) at 537 W 27th St next to the High Line.

Pembrook Capital Management closed a $15.5M bridge loan for the acquisition, renovation, and repositioning of Tribeca's 16k SF 148 Duane St. Conversion into condos is under way, but the buyers will take it rental. Pembrook also provided $3.5M in mezz financing, on top of its original $9M, for the redevelopment of 62-74 Ave B into an 81-unit luxury rental building and an $8M mezz loan for the acquisition of five rent-stabilized elevator buildings (555 residential units and 18 retail blocks) in the Bronx's Pelham Parkway on Barnes and Wallace avenues between the Bronx River and Hutchison River parkways.

Island Associates Roger Delisle brokered the sale of the former Tower Diner at the entrance to Long Island-MacArthur Airport on Veterans Highway and Johnson Avenue in Bohemia, Long Island, for $2.3M. The site includes a 5,500 SF building and 0.79 acres of land with 55 parking spots.

SL Green Realty Corp, repped in-house by Howard Tenenbaum and Gary Rosen, leased the 27k SF 16th floor of 1185 Ave of the Americas (between 46th and 47th) to insurance firm Alterra USA Holdings, which was repped by JLL's Scott Cahaly.

Wogies inked a 4,000 SF lease for a new bar and grill at 44 Trinity Pl/71 Greenwich St. Massey Knakals Will Suarez and James Nelson brokered the deal. 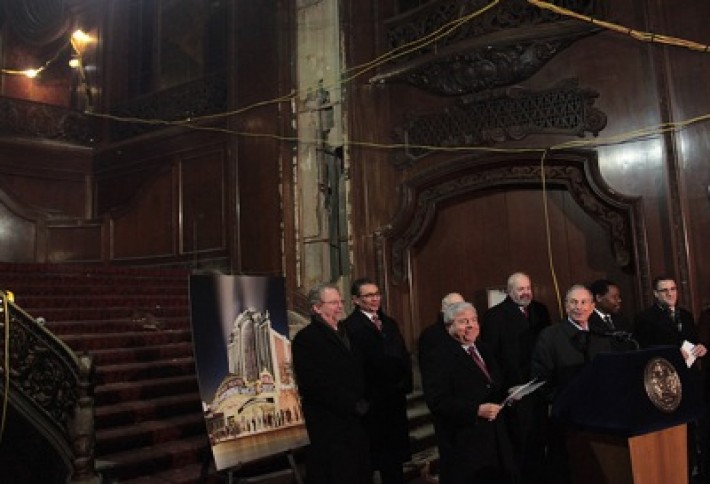 Mayor Mike and NYC Ed Dev Corp prez Seth Pinsky traveled to Flatbush, Brooklyn, yesterday to join borough prez Marty Markowitz to break ground on the $93.9M restoration of the historical Loew's Kings Theatre. Built in 1929, the property at 1027 Flatbush Ave has been vacant since '77 and will be expanded from 68k SF to 93k. The City of New York has leased the facility to Kings Theatre Redevelopment Corp (ACE Theatrical, Goldman Sachs, and National Development Council) for 55 years. Gilbane is construction manager.

The Fort Monmouth Economic Revitalization Authority--via Cushman & Wakefield's Gil Medina, Les Smith, Christopher Kinum, Kevin Carton, David Bernhaut, and Grace Braverman--has issued a Request for Offers to Purchase (deadline Monday) for a 64-acre redevelopment parcel in Eatontown. Known as Howard Commons, it's planned for 275 residential units and 15k SF of retail. Fort Monmouth was decommissioned in the Base Realignment and closure Act, which moved those military operations to Aberdeen Proving Ground outside Baltimore.

The temperature outside is even lower than the Giants' per-game points toward the end of the season. Email amanda.metcalf@bisnow.com.