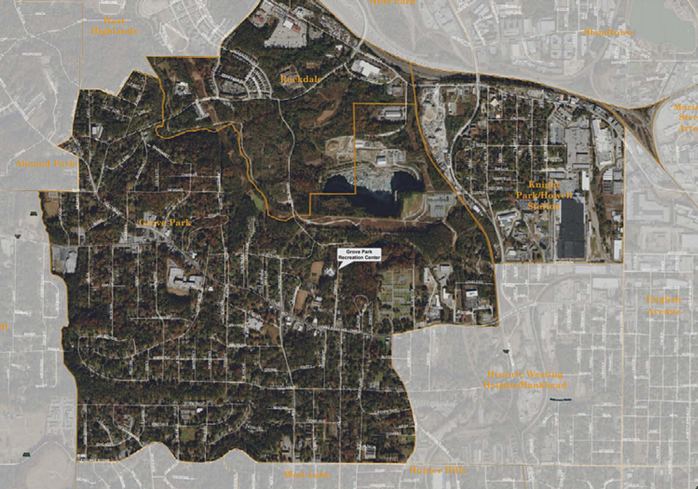 City of Atlanta
Map showing the areas in West Atlanta impacted by the moratorium.

As a wave of new development around the future Westside Park threatens to displace long-term residents who can't afford rising prices, Atlanta Mayor Keisha Lance Bottoms is putting the kibosh on new projects for the next six months.

Bottoms ordered a moratorium on all new development in neighborhoods surrounding the Westside Park to address “rapid gentrification occurring in the area,” city officials said in a release.

This includes refusing all new rezoning applications, building, land disturbance, special use permits and special administrative permits. Neighborhoods involved in the moratorium include Rockdale, Knight Park/Howell Station and Grove Park, all of which are situated around Bellwood Quarry. Projects that have already received permits and approvals are not affected by this executive order, city officials said.

“A key pillar to the Administration's comprehensive affordable housing plan is ensuring long-term residents are not priced out of the neighborhoods they have built,” Bottoms said in a release. “We know that every permit triggers some form of change in these communities, and it is of the utmost importance that development is carried out in a deliberate, fair and thoughtful manner.”

The city is turning the Bellwood Quarry — a popular filming destination featured in such shows as The Walking Dead and Stranger Things — into a massive park, with the first $26M phase connecting directly into the extremely popular Atlanta BeltLine path. That move has spurred developers and speculators in the area to cash in on depressed properties for redevelopment to the tune of more than $100M, according to a recent Atlanta Journal-Constitution story.

Bottoms said while the moratorium is in place, various city departments are seeking to work with community activists to better align policies to address affordability and create an “equitable development framework.” The city has not disclosed what exactly those policies would entail.

Atlanta is not the only city grappling with gentrification, affordability and residents pushing back against development. Community buy-in is increasingly necessary to get projects built, and given 2020 is an election year, many experts expect municipalities to foster more efforts at reining in surging rent growth and property values that displace long-term residents and those who cannot afford luxury rents. Already in Atlanta, grassroots efforts are drawing attention to developer incentives, prompting a couple of instances where incentive packages were shelved. Montgomery County, Maryland, officials also imposed a residential development moratorium for areas in Bethesda and Silver Spring last year. Outright rent control has reared its head in New York, California and Oregon.

The move by Bottoms comes as developer Brock Built Homes is in a legal dispute with a real estate broker for allegedly being shoved aside as lead developer in a master-planned project that included properties the partnership had not even officially acquired, according to the AJC. The lawsuit provided a peek into developer appetite in the area for foreclosures and depressed properties, anticipating a development boom.