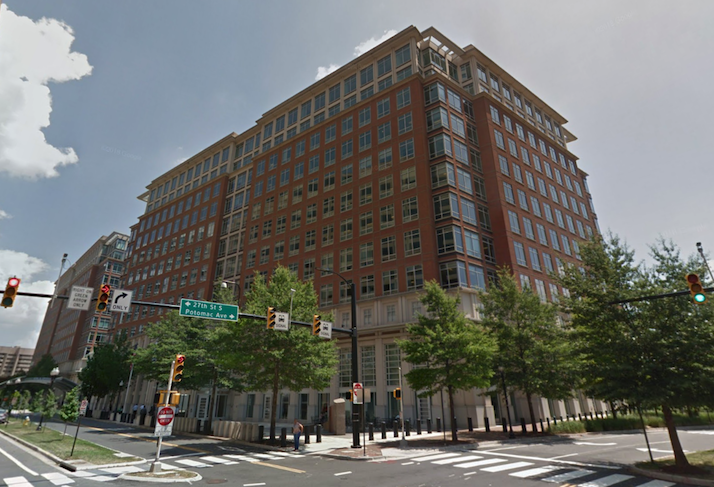 Google Maps
The office building at 2777 Crystal Drive in Arlington

An office building in Arlington's Potomac Yard neighborhood could soon lose its anchor tenant as the federal government continues to shift agencies from leased to owned space.

The General Services Administration is planning to move 1,200 Environmental Protection Agency staff out of the 2777 Crystal Drive building and into the William Jefferson Clinton complex on Pennsylvania Avenue, the Washington Business Journal reports.

The move was unveiled Monday in a congressional justification for the administration's proposed Fiscal Year 2021 budget. The GSA is requesting $48.7M to renovate the Clinton complex at 1200 Pennsylvania Ave. NW, where the EPA is headquartered.

The EPA occupies 326K SF in the Crystal Drive building, with a lease set to expire in March 2021. A LoopNet listing for the building shows it has 326K SF coming available for lease in March 2021 on the first floor and on floors four through 12. CBRE is marketing it for lease.

USAA owns the 430K SF building, constructed in 2006, at the intersection of Crystal Drive and South Potomac Avenue. The property sits just west of Ronald Reagan National Airport and about 1 mile south of the Crystal City Metro station, where Amazon has begun moving employees into leased space as part of its second headquarters.

Colliers Executive Vice President Kurt Stout, a government leasing broker, said he expects USAA will have a wide range of options as it looks to fill the building.

"I'm sure they would see if they could compete for federal tenants, but I think they have the option to lease to the private sector as well," Stout said. "Amazon helps, and it's very close to the airport."

The move comes as part of the GSA's strategy to shift from leased space to federally owned properties to save taxpayer money. Last year it acquired the Department of Transportation headquarters in Capitol Riverfront that it had previously leased.

The GSA is also moving forward with its plan to consolidate the Department of Homeland Security at the St. Elizabeths West campus. The proposed Fiscal Year 2021 budget also includes $459M for new buildings for the Cybersecurity and Infrastructure Security Agency and Immigration and Customs Enforcement as part of the DHS consolidation, moving those agencies out of leased space.

"The continued investment into GSA’s portfolio provides opportunities for savings both for our agency partners and the American people," GSA Administrator Emily Murphy said in a release. "Looking forward to FY21, GSA will be making strategic capital investments that lead to a reduction in costly leased space."