Amazon Plans To Begin Work On HQ2 Development This Month

In a matter of weeks, construction crews will begin to tear down a block of 1950s-era warehouses in Arlington's Pentagon City neighborhood to make way for two shiny, high-rise office towers that will house thousands of Amazon employees. 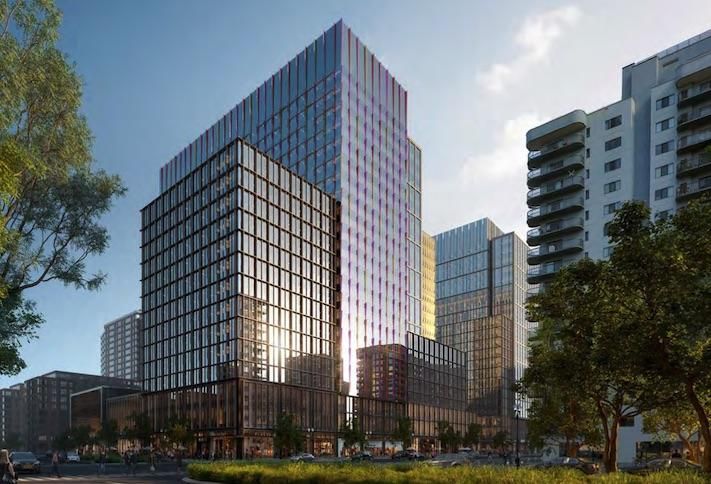 ZGF Architects
A rendering of the first phase of Amazon HQ2 development, seen from 15th and Eads streets.

Amazon has already moved more than 400 employees into leased office space in nearby Crystal City, but it plans to break ground on the first phase of new development at its second headquarters this month, Bisnow has learned.

The development team applied for building permits Dec. 26 to construct the office buildings, according to Arlington County permit records. The application has yet to be approved, but the county website said it typically takes about 15 business days to review new commercial construction permits.

Amazon said in a Dec. 27 blog post it plans to begin construction in early 2020. A source with knowledge of the plans tells Bisnow the team intends to begin demolition work this month.

Another source involved with the project said the team plans to excavate the site between Q2 and Q4. The development team then expects to finish the below grade structure by Q3 2021, the above grade structure by Q2 2022, the building envelope by Q4 2022 and complete the project with the tenant fit-out in Q2 2023, according to the source, who couldn't discuss construction specifics on the record.

Amazon is working with JBG Smith as the development partner, Clark Construction as the general contractor and ZGF Architects is designing the project. The buildings are designed to achieve LEED Platinum certification. 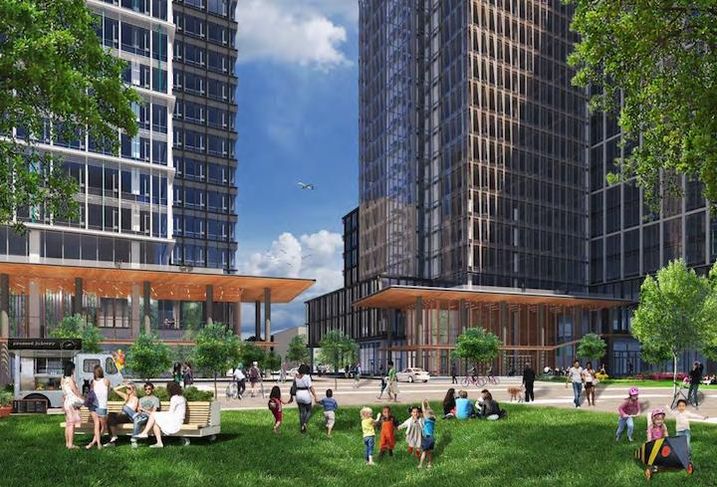 ZGF Architects
A rendering of the park next to the two planned Amazon HQ2 office buildings.

The two office buildings will be built on a six-acre site along South Eads Street between 13th and 15th streets. The site is currently occupied by two 1950s-era warehouse buildings that are not long for this world.

The office towers will include at least 69,500 SF of retail and 1,900 parking spaces. They will sit next to a two-acre park, part of the Metropolitan Park development that includes four existing residential buildings.

The development is also planned to include a day care center, a 700-person meeting space Amazon says it will share with the public and over a half-mile of new protected bike lanes.

Amazon reached a deal in April to buy the Metropolitan Park site from JBG Smith, the REIT that owns a large portfolio in the National Landing area. It also signed leases in April with JBG Smith for 537K SF across three Crystal City office buildings, and three weeks later it signed a fourth lease for an additional 48K SF.

The tech giant is currently hiring for 421 additional jobs at HQ2. Of the open job spots, 155 are in software development; 77 are in sales, advertising and account management; and the remainder are spread among a variety of other areas.

Amazon expects to reach nearly 1,600 employees by the end of this year and 3,500 by the end of December 2021, the Washington Business Journal reported. It plans to accelerate its hiring — it vowed to employ at least 25,000 at HQ2 within a decade — upon the delivery of the Metropolitan Park buildings. 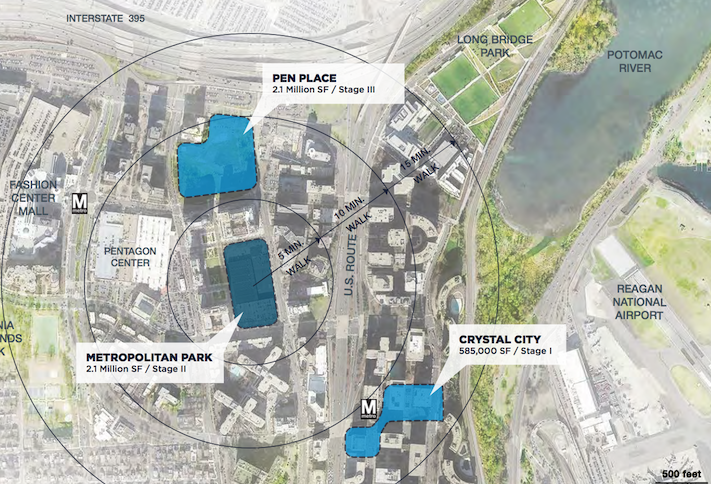 Arlington County
A map showing the proximity between Amazon's leased space in Crystal City and its two phases of new development planned in Pentagon City.

After Metropolitan Park delivers, Amazon plans to build another 2.1M SF at Pen Place, another development site it is buying from JBG Smith one block to the north.

In addition to Amazon's development, a host of other projects have moved forward in the National Landing area in the period since Amazon's November 2018 announcement. JBG Smith has filed plans to add thousands of new housing units to its National Landing portfolio with a combination of redevelopment projects and new construction. Developers such as Brookfield, LCOR and Kimco Realty have also moved forward with new projects.

Crystal City BID President Tracy Gabriel said there are roughly 6,000 units planned for the neighborhood, and she has seen the pace of development proposals accelerate since the Amazon announcement. She said she is glad to see the Amazon project and other developments moving forward, especially because of the ability to add new parks to the neighborhood.

"The opportunity for a signature park in Metropolitan Park I think will be a great asset not just to Amazon, but for the entire community," Gabriel said.

The BID received county approval in September to expand its boundaries to include Pentagon City and Potomac Yard, the area where Virginia Tech plans to build the new, $1B innovation campus that was pitched to lure Amazon. Gabriel said the Crystal City BID is discussing rebranding efforts that could include potentially changing its name to the new National Landing moniker, but it has yet to make a final decision.

Gabriel said the BID's focus this year is on beautifying the neighborhood, with elements such as landscaping and murals, and improving connectivity. As more projects are built, the BID's focus will shift to improving the public spaces around the developments.

"We will be making lots of enhancements to the public realm as new development comes online," Gabriel said. "I think you'll see a major transformation of the public realm, with a focus on the first 20 feet of development and how that intersects with the experience on the street."