Boston Properties has already landed an anchor tenant for the office space in Fannie Mae, which pre-leased 850K SF at Reston Gateway last February. It was the largest single office lease signed in Fairfax County in 2018. Second place also went to Boston Properties, as IT and engineering research firm Leidos pre-leased all 276K SF of the proposed 17-story Reston Town Center Tower.

Boston Properties has also reportedly floated the idea of building a performing arts center to round out the mix of uses at Reston Gateway. A feasibility study for the center was OK'd in March, according to Reston Now. 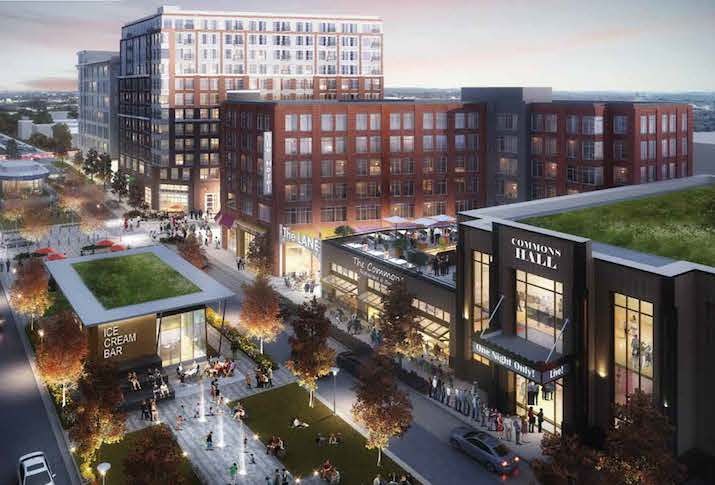 The city of Falls Church has entered into a public-private partnership with three developers to overhaul the 10-acre area between the West Falls Church Metro station and George Mason High School, bringing a mixed-use development dubbed the Commons to the area known as Little City. The complex will fall just inside the Fairfax County limits, near the border with the city of Falls Church.

The development, Bisnow reported, is set to include almost 400K SF of office and 125K SF of retail space along with a large residential development comprising 328 market-rate and affordable apartments, 245 condos and 150 to 200 units of senior housing.

The city has broken ground on pedestrian and traffic improvements to the nearby roadways in preparation for the new residents, workers and visitors, as well as infrastructure for a bike-share program. Some publications are drawing parallels to the Mosaic District, a shopping and dining complex in Merrifield, one stop farther out on the Orange Line. The residential portion of Arrowbrook Centre, a 2.2M SF planned development near the future Innovation Center Silver Line station, is underway, 14 years after Fairfax County signed off on the 33-acre development. The county had approved the project for around 2M SF in 2005 and in 2015 OK'd an additional 280K SF.

The first phase of Arrowbrook, dubbed Ovation at Arrowbrook, takes up 4.6 acres and is slated to include 274 units of workforce housing as well as 36K SF of retail. A separate deal has been reached between the landowner and Pulte Homes, which is planning a 32-unit condo building and 10 townhouses on a 1.5-acre site at Arrowbrook.

The final plans for Arrowbrook involve three more office buildings totaling 645K SF, a 250K SF multifamily high-rise and a 150K SF hotel. However, Bisnow reported, the ownership group is waiting for demand along the Dulles Toll Road corridor to increase before placing the parcels on the market.