Adams Morgan's nightlife scene and funky character are powerful draws, but the Northwest D.C. neighborhood's population has remained stagnant for decades as scarce available land and active opposition have stood in the way of development.

That dynamic has begun to change, with several new apartment projects at various stages of development using creative methods to deliver new units, from building above existing retail to converting former embassies, office buildings and college dorms into apartments. 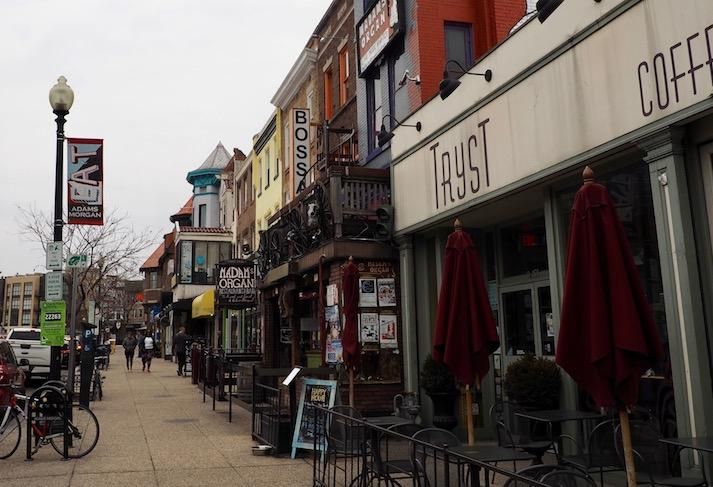 The addition of new apartment units and residents is a trend Adams Morgan hasn't seen in years. From 1980 to 2010, while much of the city experienced significant growth, Adams Morgan's population went from 15,352 to 15,630, according to NeighborhoodInfo DC statistics reported by Greater Greater Washington. Building permit data showed the neighborhood gained just 57 new housing units from 2008 to 2015.

The neighborhood's main streets are lined with historic retail buildings, row houses, churches and other long-standing structures that make new development difficult. Additionally, opponents have held up projects with lawsuits that have caused lengthy delays and forced developers to pay large settlements to move forward.

Those challenges have presented roadblocks to new multifamily development, but with surging demand for new units and a citywide housing affordability crisis, developers are finding ways around them.

"Adams Morgan is now catching up in certain respects with the influx of people moving into the city," Foxhall Partners Managing Partner Matt Wexler said. 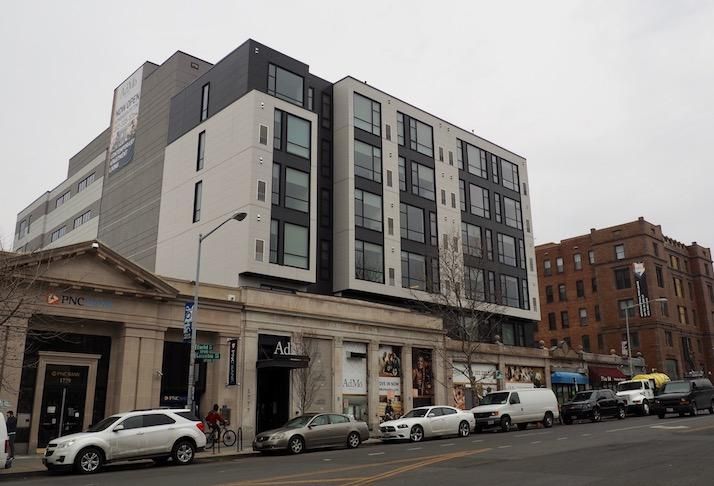 The apartment building, AdMo Heights, sits across the street from The Line Hotel, a 220-room hotel with restaurants, a cocktail bar and café that opened in late 2017 after Foxhall and Sydell Group repurposed a former church. AdMo Heights residents will have access to the fitness club in The Line Hotel, since the apartment site didn't have enough square footage for a gym of its own.

The new apartment building was constructed above existing retail spaces for which Foxhall preserved the existing facades. The storefronts were not designated as historic, so the developer didn't have to go through the Historic Preservation Review Board. And it developed the project by-right within the existing zoning, so it did not need to apply for zoning changes.

While it worked around the city planning processes that can cause delays, Wexler said his firm did speak with neighbors to make sure they were comfortable with the design of the project.

"We were thankful to collaborate with the reasonable members of the community to strike a deal that was a win-win," Wexler said.

The developer, which acquired six adjacent retail properties to build the project, signed multiple new tenants to occupy the spaces. The building will feature a CorePower Yoga studio and a new bar and restaurant from the team behind local restaurant success story Tail Up Goat, plus a Chase Bank ATM. Foxhall is now planning a second phase of the apartment development over the two storefronts next to AdMo Heights, and it plans to pursue by-right development again to avoid delays.

Wexler's recent experience with the hotel development across the street showed him the challenges of developing in the neighborhood and the tactics that have delayed thousands of housing units across the city. After The Line Hotel's approval was appealed, the developer agreed to pay a $2M settlement to a nonprofit group, the Adams Morgan Forget Me Not Fund, to allow the project to move forward. 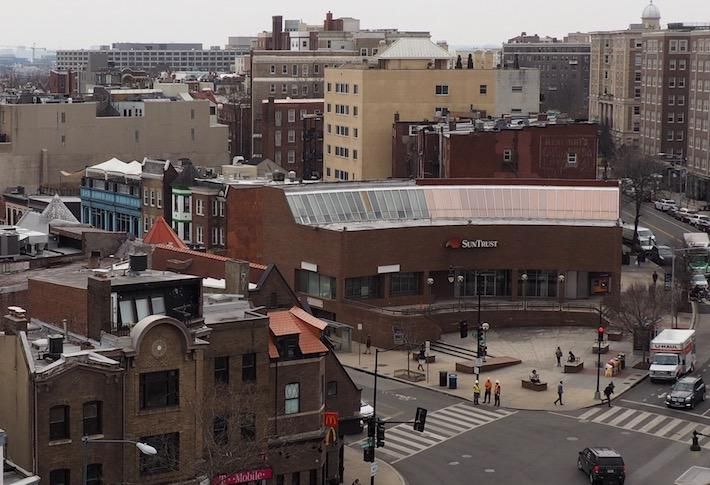 Bisnow/Jon Banister
The SunTrust Plaza site at the corner of 18th Street and Columbia Road, as seen from the roof of the AdMo Heights apartment building

Neighborhood opposition and lawsuits have also stalled a multifamily development planned for a prominent Adams Morgan site for over two years.

PN Hoffman filed plans in February 2016 for a condo building with ground-floor retail on the site of the SunTrust Bank and outdoor plaza on the corner of 18th Street and Columbia Road. The plaza is part of the property PN Hoffman owns, rather than a publicly owned space, but the developer's proposal to reduce the size of the plaza has faced stiff opposition.

In September 2016, PN Hoffman pulled its application after neighborhood protests, then submitted new plans the following month that reduced the density of the building. Those plans received historic preservation approval in January 2017, but two citizens groups filed suit against the project in June 2017 and a judge two months later halted the project.

There has been no movement on the project since, and the developer — which also recently built The Wharf and two other multifamily projects in the waterfront area — declined through a spokesperson to give any update on its plans.

Even as the project on Adams Morgan's main intersection remains stalled, new multifamily developments have moved forward on the outer edges of the neighborhood that have also required creative methods to produce new housing. 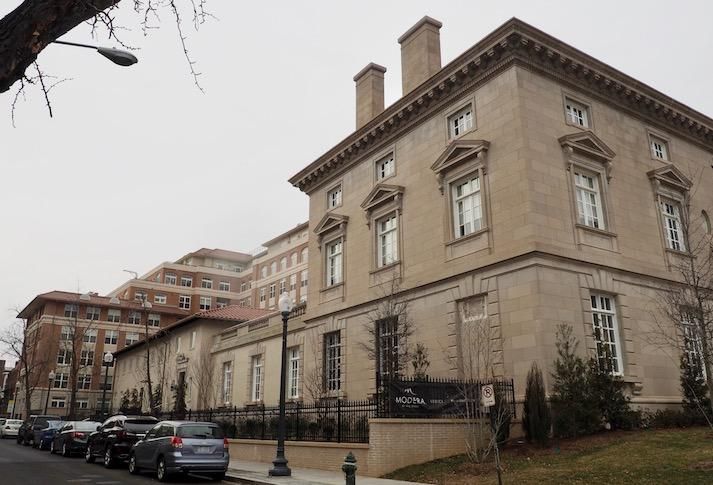 The first residents began moving in December into Mill Creek Residential's redevelopment of the former Italian Embassy building at 2700 16th St. NW. The project, which sits less than a half-mile from the 18th and Columbia intersection, is branded as Modera Sedici. It features 22 high-end apartments in the historic embassy building and 112 market-rate units in the adjacent, nine-story building Mill Creek built.

The Dallas-based REIT acquired the site in 2015 after a separate development team had brought it through D.C.'s planned-unit development process. The developer made modifications to the PUD that needed Zoning Commission approval, which presented some difficulties, Mill Creek Managing Director of Development Joe Muffler said. But ultimately it saw strong pent-up demand in the neighborhood for new housing and was willing to pursue an ambitious project to meet that need.

"There are very significant barriers to entry in those areas," Muffler said. "Neighbors are very concerned about what is in those fairly dense residential neighborhoods. Land costs are as expensive as you can get in the city. So creativity is the only way to get stuff like this done." 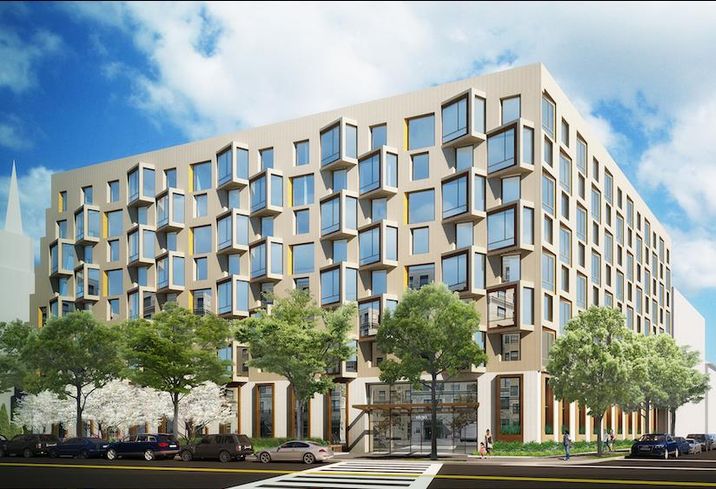 Around the corner from Mill Creek's project, Eastbanc is preparing to break ground on a 176-unit multifamily project at 1630 Columbia Road NW. The project is being built on a surface parking lot next to the Scottish Rite Center. The developer has been planning the project for nearly a decade and has revised its design following some pushback from the community.

Eastbanc closed on the land acquisition in February 2018, with Japanese investor Mitsui Fudosan as an equity partner, and a spokesperson said it is planning to break ground in the middle of this year.

At 2601 16th St. NW, one block south of the Mill Creek and Eastbanc projects, Jair Lynch Real Estate Partners in 2017 launched the renovation of a former Howard University dormitory into a 206-unit apartment building. Residents will begin moving March 1 into the building, branded as âme.

Another two blocks south at 1724 Kalorama Road NW, a nonprofit developer is moving forward with the conversion of an office building to residential. Jubilee Housing filed an application in September to redevelop a vacant, three-story office building into 24 affordable housing units.

"New residents and new buildings can only increase the vitality of Adams Morgan," Wexler said. "That's how restaurants and other businesses are going to thrive."

CORRECTION, FEB. 11, 2 P.M. ET: A previous version of this story incorrectly stated the party Foxhall agreed to pay a $2M settlement to in the Line Hotel case. The story has been updated.