A Cleveland developer started construction on a Prince George's County project in the final days of March, despite the uncertain economic environment that has caused some developers to hit the pause button. 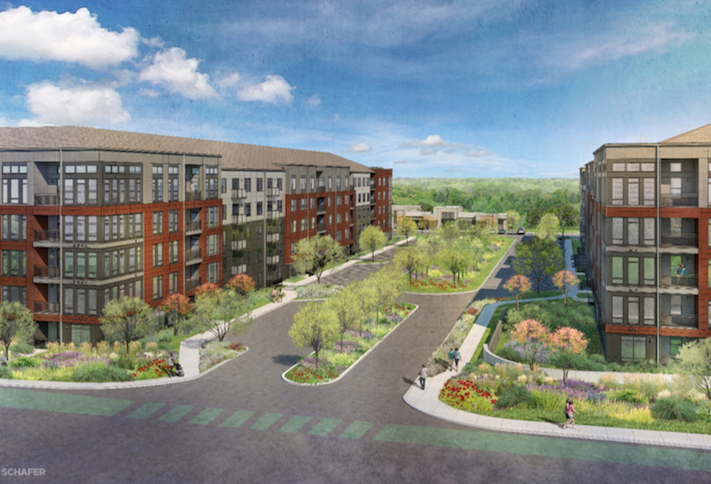 The NRP Group tells Bisnow it broke ground March 27 on the 354-unit Motiva project near the Greenbelt Metro station. The project is a joint venture with Willton Investment Group, and EagleBank provided the construction loan. It is scheduled to deliver next year.

"While these are unprecedented times, closing Motiva in the midst of an uncertain market is a testament to the dedication of our team and partners, and we're excited to move forward with this development," The NRP Group Vice President of Development Josh Wooldridge said in a statement.

The coronavirus and the economic crisis have led some developers in the area to halt new construction — Retail Properties of America recently put its Largo project on hold. But Maryland, D.C. and Virginia have deemed construction an essential business operation and allowed it to continue. NRP is also working on a 260-unit project in Largo that broke ground last year.

EagleBank Executive Vice President Tony Marquez said the bank has been in talks with NRP for roughly two years and had committed to provide the loan, which he said closed recently.

"It was not a hard decision to proceed with what we had agreed to do with our client," Marquez said. "Keep in mind, this is a transaction that will take time to build. It is proximate to Metro and the rents are quite affordable, so what you have is a situation where the economics of this will be playing out a year and a half down the road."

Prince George's County Economic Development Corp. CEO David Iannucci said he is encouraged to see The NRP Group break ground on its project. He noted that several other construction projects are moving forward in the county, including developments in New Carrollton, College Park and Suitland.

"The fact that the development community is showing continued confidence in Prince George's County and proceeding with multimillion-dollar projects is a sign of hope for all of us that we will emerge from this health and economic crisis, and we will get back to normal," Iannucci said. 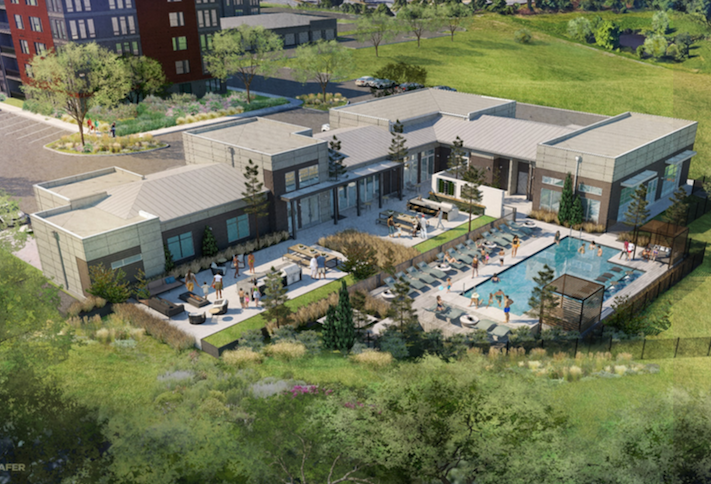 The NRP Group
A rendering of the stand-alone amenity building and outdoor pool at The NRP Group's Motiva project in Greenbelt.

NRP's 15-acre development, approved in January by the Prince George's County Planning Board, is planned to include two five-story apartment buildings. The plan calls for 55 studios, 157 one-bedroom units, 123 two-bedroom units and 19 three-bedroom units.

The development will feature a one-story, 7K SF clubhouse building that will include the leasing office, a gym, a business center, a lounge area, a locker room and an outdoor pool. It will also have a landscaped public plaza with a bike-share station, benches and art.

The project sits near the intersection of Cherrywood Lane and MD-201. It is across the street from Capitol Office Park, an 800K SF business park with over 100 tenants including Bozzuto. It sits about a half-mile from the Greenbelt Metro station and less than a mile from The Beltway. 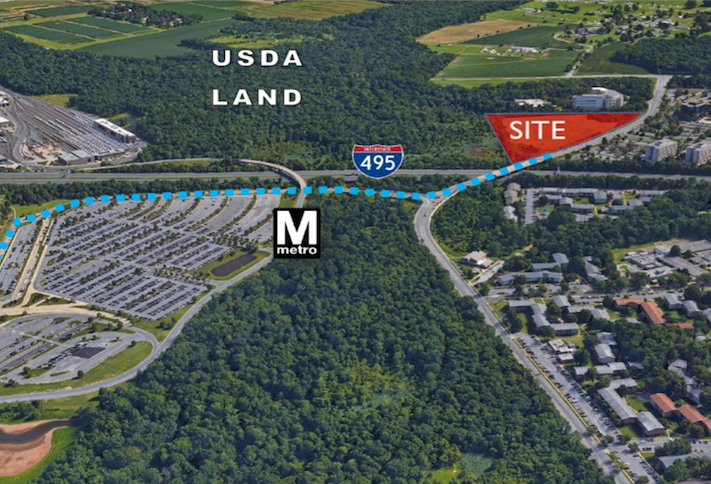 Prince George's County Planning Board
A map showing the Motiva site and its proximity to the Greenbelt Metro station.

The northern terminus of the Green Line, the Greenbelt station is surrounded by surface parking and trees, lacking the type of transit-oriented development that has emerged in other parts of the region. The lot next to the Metro station was among three finalists for the new FBI headquarters campus before the Trump administration scrapped the search in 2017. Iannucci said that site is still prime for a major development.

"As frustrated and angry as we were at the federal administration's pullback on that project, what is important to know is there is no TOD site in the region that is as far along in entitlements as that acreage at the Greenbelt Metro," Iannucci said. "The planning is all in place for a very dense, mixed-use project to go at Greenbelt, whether it's commercial office, institutional or federal."

While NRP was able to close its financing and move forward with the development, the overall market is preparing for a slowdown in development. Construction starts in the D.C. area were already down 53% in February, before the coronavirus forced large parts of the economy to shut down.

"Obviously there's going to be an industry-wide slowdown," Marquez said. "Anybody that doesn't think this will a dampening effect on the appetite of equity and debt to move forward with certain projects is kidding themselves. Across the equity and debt world, people are going to have to re-evaluate plans. The real rub will be when decisions to proceed become less an exception and more the norm."