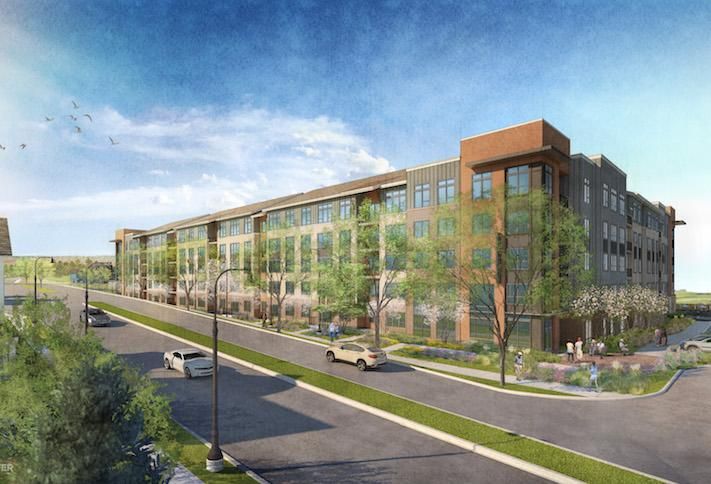 Prince George's County hopes to spur more development near the new hospital under construction at the Largo Town Center Metro station, and another project is now moving forward.

The NRP Group announced Tuesday it broke ground on a 260-unit apartment project. The developer brought on Willton Investment Group as its equity partner and received construction financing from Fifth Third Bank.

The project, branded as The Everly at Largo Metro, is being constructed near the interchange of the Beltway and MD 214, about a half-mile from the Largo Town Center Metro station. The developer filed plans in March and said it expects the project to deliver in 2021.

The development will consist of three buildings, with apartments ranging from one to three bedrooms. Its amenities will include a pool deck with fire pits and grills, a fitness center and a bike storage room.

The Largo Town Center area in 2021 will welcome the new $543M University of Maryland Capital Region Medical Center, a 600K SF facility that appears to be sparking development in the surrounding area. NRP Vice President of Development Josh Wooldridge called the hospital a "game changer" for the area.

"Our community will be right there to provide housing for the mini-economic boom the hospital will create," Wooldridge said in a statement.

The project is not the only development moving forward near the new hospital. Retail Properties of America plans to break ground this year on the first phase of its 50-acre Carillon project that is ultimately slated for 3,000 units and 300K SF of retail. Prince George's County Executive Angela Alsobrooks said at a September Bisnow event she plans to propose a financial incentive package to help support RPAI's development.

"The downtown Largo concept is real," Alsobrooks said at the event. "It's not just a hospital and all the medical buildings that will be there. I think Carillon will completely change the complexion of that whole area in Largo right next to the Metro station."

Additionally, Peter N.G. Schwartz Co. is moving forward with a 379-unit building near the Largo Town Center Metro station, the second phase of its 20-acre project with a 424-unit building that delivered in 2016.