Six weeks after the grand opening of The Wharf, the massive Southwest Waterfront development featuring dozens of new restaurants, retailers and entertainment venues, plus residences and offices, the project's developer is happy with what he has seen so far. 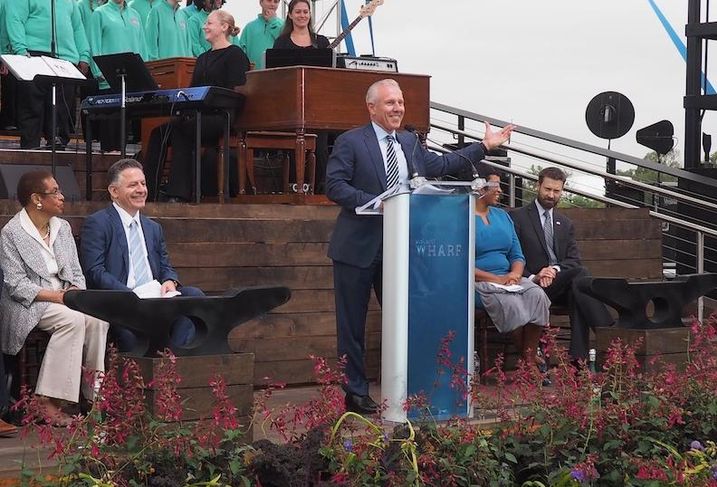 PN Hoffman CEO Monty Hoffman, who bought a $4M condo in The Wharf's Vio building and has already moved in, said the retail performance numbers have been higher than expected, but he sees the real success story when sitting outside and watching the people interact with the new development.

"You’re never sure exactly how the public is going to use all the space," Hoffman said. "I expected large crowds at the opening. I was surprised and pleased the next morning there were still reasonable crowds. People were walking up and down Wharf Street at 10 the next morning. I realized they’re never going away. People are here, and that is really cool. The public has embraced it and it’s been nonstop since."

"Here’s a place that’s alive at night in a way," Moore said. "It just arrived at the scene, there was no soft opening. It happened all at one time, which is kind of a gutsy thing to do. It really went from zero to 60 in 10 days." 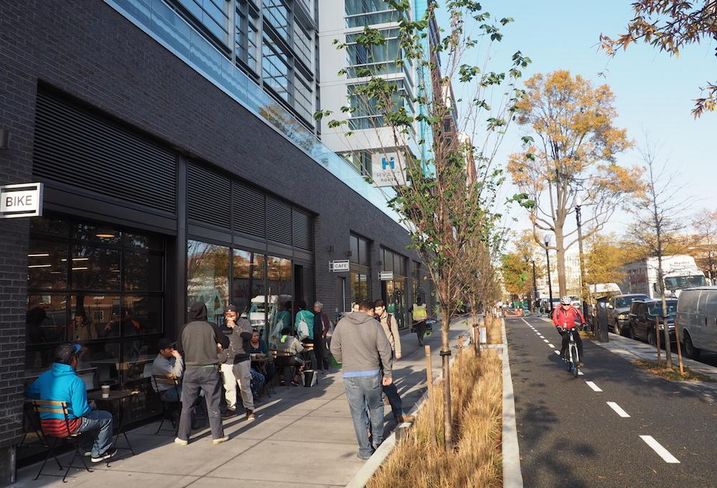 Bisnow: Jon Banister
The sidewalk and bike lane on the Maine Avenue side of The Wharf

To gauge how much neighborhood activity The Wharf is creating, the business improvement district tracked several metrics and found sharp increases in the number of people taking different modes of transportation around the area.

The number of pedestrians walking up and down Seventh Street and along Maine Avenue increased by 113% from the week before the grand opening to the week after. Metro ridership increased at L'Enfant Plaza and the Waterfront stations by 27% from the week before the opening to the week after. The free shuttle circling between L'Enfant Plaza, the National Mall and The Wharf carried 7,400 shuttle riders from Oct. 12 to Oct. 31. An average of 303 riders use the dedicated bike lane on Maine Avenue each day.

"There hasn’t been nighttime traffic there in 25 years,” Moore said. “There has never been a reason to be there even after four in the afternoon, but certainly past 10. Now all of the sudden there’s nighttime traffic and it’s in a big way.”

The Hoffman-Madison Waterfront development team is working with DDOT on the intersection lights and barriers to make traffic run more smoothly, but so far Hoffman is pleased with the transportation infrastructure.

"We haven’t had the kind of traffic jams that some people were predicting," Hoffman said. "That's probably the biggest success of all." 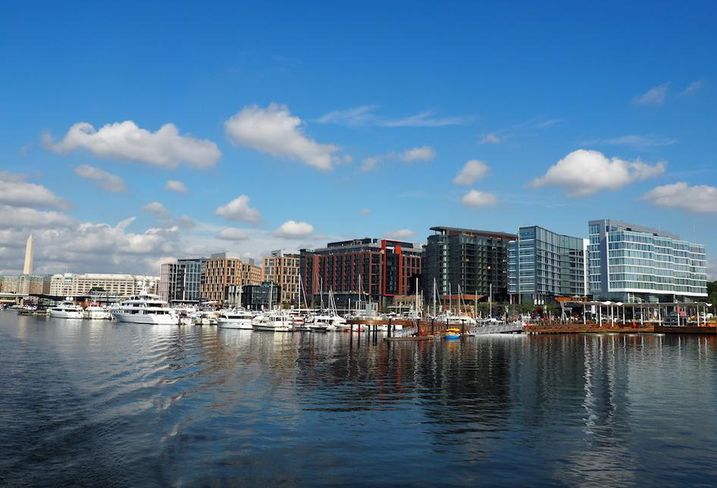 With so much of The Wharf consisting of outdoor public spaces, the winter months, when people tend to stay indoors, could present a challenge. Hoffman said the need to make it accessible during cold weather factored into the decision to created shared woonerf-style streets rather than pedestrian-only promenades.

"We were concerned most with January and February," Hoffman said. "But cars are going along the water and people are learning they can drive on that. We're working out the kinks and trying to make it easier for people to valet and go into parking garages."

The frequent music acts playing at The Anthem and Pearl Street Warehouse, plus Union Stage when it opens soon, will also naturally create activity around The Wharf even during cold weather, Hoffman said. He also highlighted the special winter features being installed at The Wharf, such as a 50-foot-tall Christmas tree and an ice skating rink. 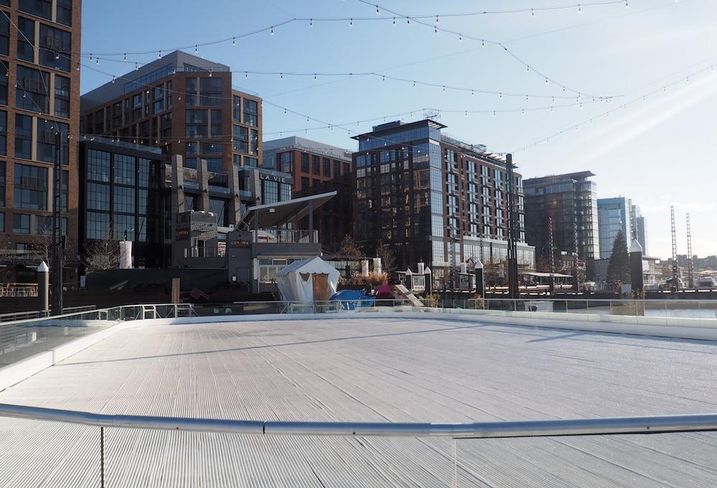 Bisnow: Jon Banister
The ice skating rink set up next to The Wharf's Transit Pier

The Wharf is also hosting the District's Holiday Boat Parade, and Moore estimates that could draw more than 100,000 people. He praised the team that organizes the outdoor events at The Wharf and said it would help keep the waterfront packed during cold weather.

"They can bring 20,000 people to that space, it wouldn't matter if it were five degrees out," Moore said. "It's an event venue unlike anything we've ever seen before."

While the development team has enjoyed watching the public reception of the first phase, it has not slowed down its leasing effort for the office, retail and multifamily space. Roughly 25% of Phase 1's office space remains vacant, and Hoffman said it should be able to announce leases to fill about half of that during Q1. He said there are only two retail spaces that remain available and he expects to announce leases for both of those early next year. 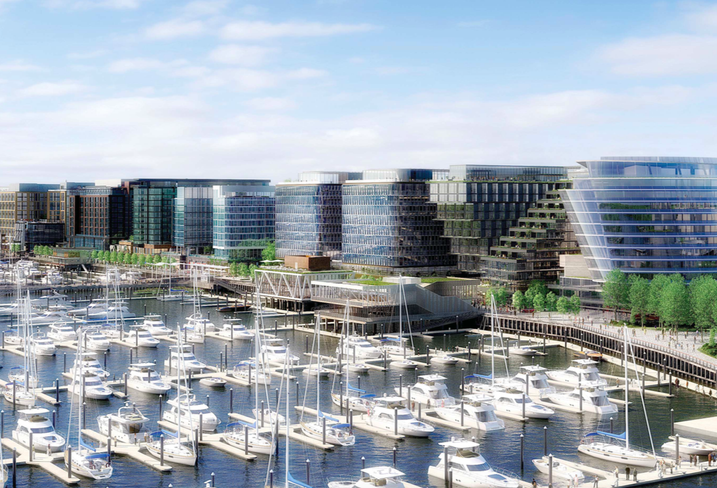 Courtesy: Hoffman-Madison Waterfront
A rendering of the full build-out of The Wharf with Phase 2 on the right

The team is also hard at work moving the Phase 2 plans through the entitlement process. Hoffman-Madison Waterfront has released batches of new detailed renderings and participated in three public zoning commission hearings this month.

The second phase is planned to include 1.2M SF of development directly to the east of Phase 1. The plans call for three office buildings, one rental apartment building, a condo building and three smaller buildings out on the water. It was designed by a team of 10 architects led by Perkins Eastman.

Some neighbors have expressed opposition to the second phase, citing concerns over excessive light and noise and vehicle and foot traffic. Hoffman said he takes the concerns seriously but does not expect them to delay the project.

While some have voiced concerns, Moore said many neighborhood residents have embraced the project since its opening.

"There's something big happening here in a lot of ways," Moore said. "The neighborhood people, I think, feel like they hit the lottery a little. It's far enough away to not be all over their front lawn, but its close enough to walk to dinner or take a walk."

The developer is also working on securing financing for the $1.1B Phase 2 and marketing the office space to potential tenants. Hoffman hopes to break ground by this time next year.

"We are really working hard to make Phase 2 its own unique part of our overall community, but its own offering so it's not redundant," Hoffman said.

Hoffman and Moore will both speak Nov. 30 at Bisnow's Future of Southwest D.C. and The Wharf event, held at The Wharf's InterContinental hotel.