DC residents yearning to cross the Atlantic and walk the streets of famous European cities will soon have something much closer to home to whet their appetite. 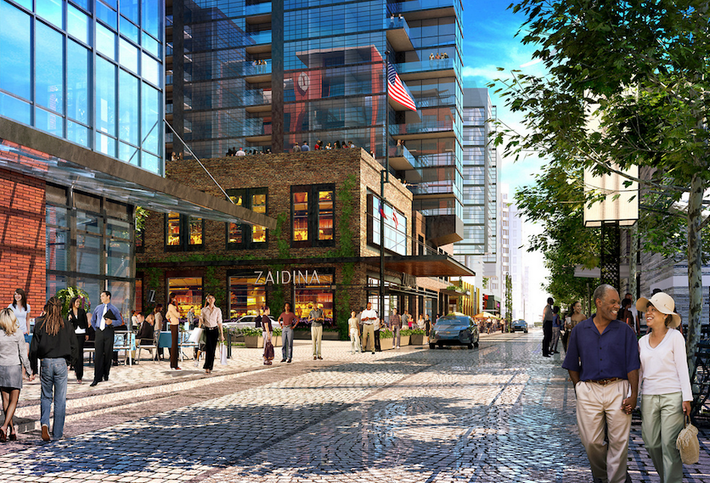 Two of the biggest upcoming developments in DC—including Hoffman-Madison Waterfront's The Wharf, pictured above—are experimenting with a European-style, shared street concept called a "woonerf" that is poised to change the way pedestrians experience the streets of DC.

A woonerf is designed to allow drivers, cyclists, pedestrians and runners to share the same space, making the street much more welcoming and appealing for all. Instead of dividing a street with barriers like curbs, sidewalks and bike lanes, woonerfs open up the street and allow for every use simultaneously. Cars are forced to drive slowly—with traffic lights and stop signs nonexistent—ultimately allowing pedestrian and cyclists to rule the road.

"They're designed to allow cars but they're not designed for cars," Perkins Eastman’s Stan Eckstut, The Wharf's lead architect, tells Bisnow.  "Cars have to behave themselves in a different way. You have to stop at every corner. Without all the normal traffic controls, the driver could become very intimidated. This is a growing trend in the centers of older European cities." 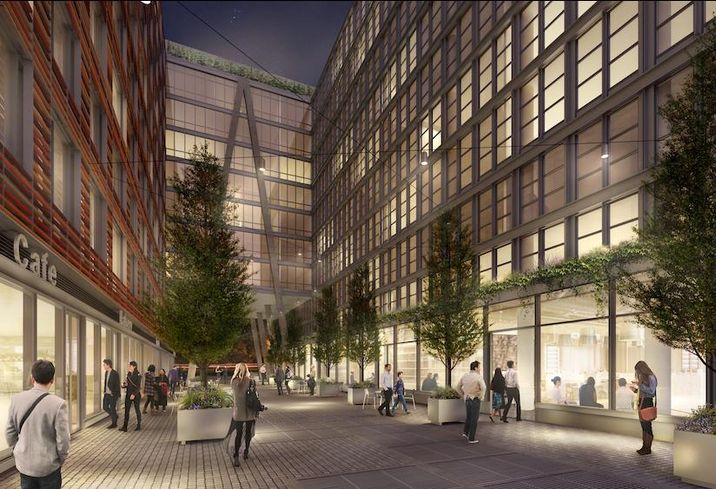 One of DC’s leading developers, The JBG Cos, stumbled upon this concept by accident, principal Bryan Moll says. While designing Parcel C of the Atlantic Plumbing project in Shaw, architects were having issues introducing curbs and began to investigate curbless environments. They chose to create a 40-foot-wide street, rendered above, that will allow two-way traffic alongside pedestrians and bicyclists. This will deliver in 2018.

After discovering the idea for Atlantic Plumbing, they decided to experiment further to create a narrower, more European-style, woonerf for JBG's Eckington Yards project, a JV with The Boundary Cos. 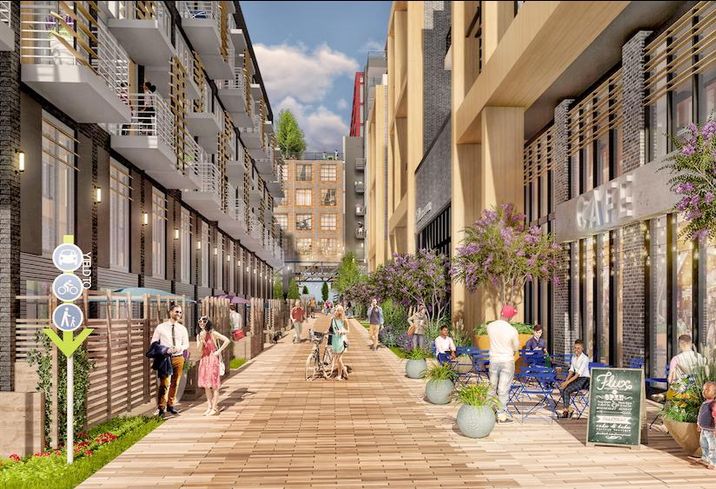 The result, pictured above, was a 30- to 35-foot-wide promenade that will be more pedestrian-oriented and is intended to discourage through traffic.

Eckington Yards will have 70k SF of retail along its woonerf, as well as apartment lobbies that force residents to walk through the shared street to enter their building, activating the street immediately after its 2019 delivery. 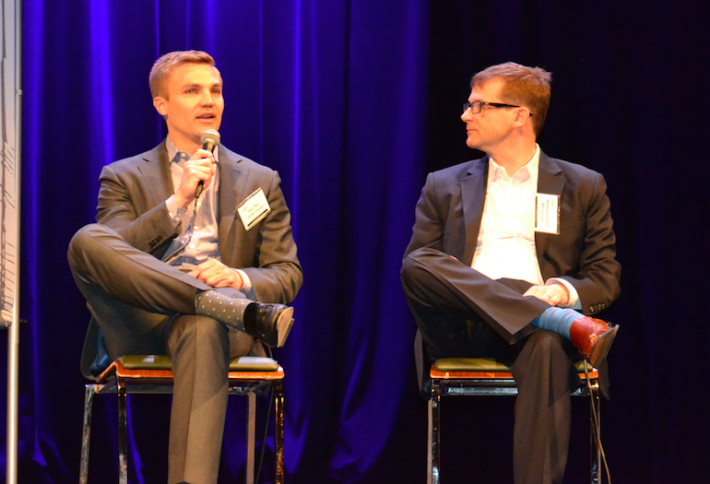 In order to be successful, Bryan says Eckington Yards must draw people from outside the neighborhood, which pushed architects to innovate the project's streetscape design.

“The reason we went into the idea of a woonerf was really because Eckington doesn’t have a downtown right now," Bryan, snapped above at a Bisnow event last September, says. "We saw this as the opportunity to create that.” 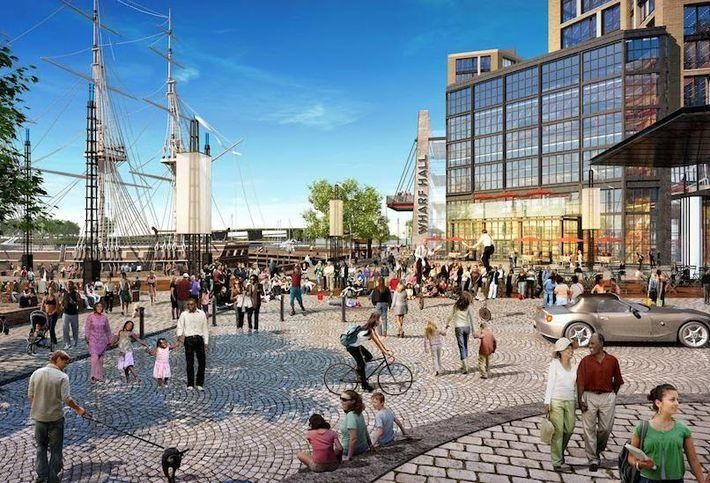 Shared streets with little to no vehicle signage have actually been proven to improve pedestrian safety. They can only work in certain areas where slow driving won’t gridlock the city. Drivers will have to tolerate some congestion, though Stan says that isn’t necessarily a bad thing.

“My goal has always been to create a little bit of congestion,” Stan says. “That’s usually a sign of a successful place where many people are going. The more people walking, the slower cars can move. The result is a safer environment where commerce—which relies on cars—can thrive. You can’t make everywhere a place you can drive through, it's much better to have places to drive to.” 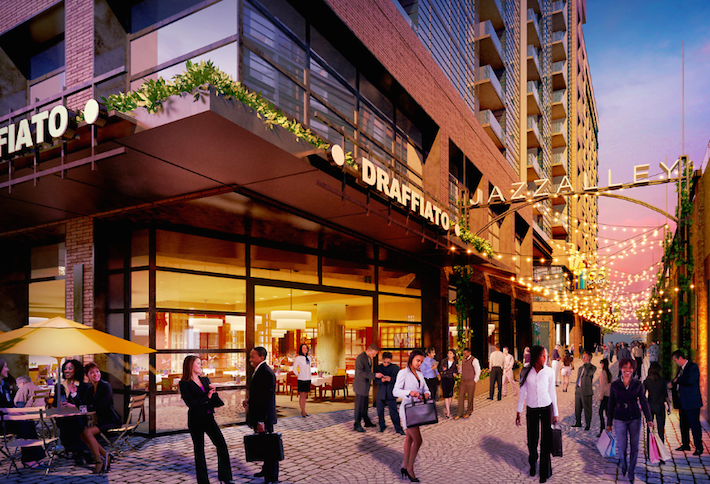 The Wharf's nightlife environment will center around Pearl Street (previously called Jazz Alley, pictured above). This narrow, block-long street will connect Maine Avenue to Wharf Street and will feature live music and entertainment aimed at attracting people from around the city.

"The more compact, the more walkable a street is, the more people can live together, the more uses can function and it works 24 hours a day, seven days a week," Stan says.

Stan says the narrow street concept wouldn't work in any city, but since DC residents and tourists are already so accustomed to walking—the District recently ranked second nationally in walkable urbanism—it was a perfect fit. He hopes The Wharf will influence other DC designers to experiment with how they create walkable spaces.

Bryan says he already sees a larger sea change happening where designers are focusing more on the importance of streets in creating active neighborhoods.

"More innovative types of streetscapes are certainly in style," Bryan says. "People are paying more attention to what the street means to the place and because of that, people are thinking outside the box."