Megaprojects are in the works throughout D.C. that could add thousands of housing units and new public amenities, but the developer of a large Northeast D.C. project facing organized opposition worries that his project, and many others, could be set back years. 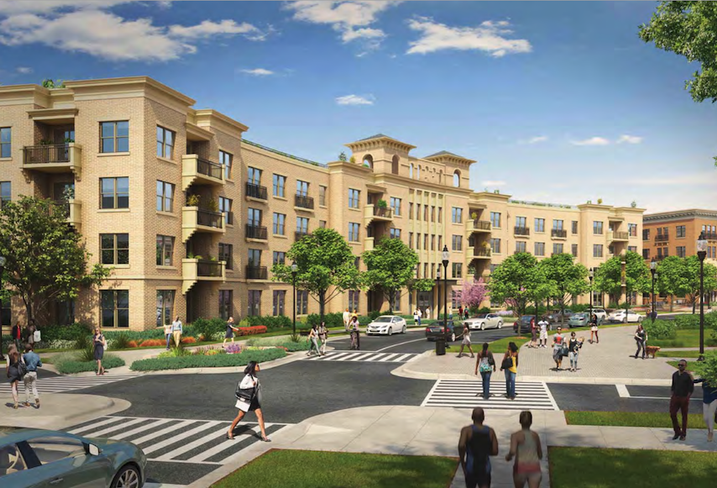 The Zoning Commission voted in May to approve Phase 1 of MidCity Development's RIA project, planned to include about 1,700 units near the Rhode Island Avenue Metro station. It will be built on the site of Brookland Manor, a community of 80-year-old buildings with 535 units mostly set aside as Section 8 housing. The planning process has been contentious, with dozens of residents, neighbors and well-known activists speaking in opposition.

MidCity must wait until the Zoning Commission publishes the order outlining its approval, and any conditions, before breaking ground. Once the approval is posted, opponents have a window to appeal the approval in court. These appeals have become increasingly common throughout the District and have delayed thousands of units of housing from breaking ground.

William Merrifield, the attorney representing the Brookland Manor Residents Association, who testified in opposition to the development, told Bisnow he plans to appeal the Zoning Commission's order if it approves the project as proposed.

MidCity Executive Vice President Jamie Weinbaum, who worked as director of the Office of Zoning from 2009 to 2011, said it has taken an unusually long time for the Zoning Commission to publish the order, likely because it is anticipating such an appeal.

“I think the reason these orders are getting extremely lengthy is because they know they’re subject to appeal, so they’re looking to shore up their arguments wherever possible,” Weinbaum said. “We had thought we’d have the order by August, then we thought September, now it’s almost November.”

Weinbaum said he expects an appeal to be filed, and is prepared for a legal battle, but is still moving ahead as if the project could break ground soon. MidCity is filing demolition permits to knock down three vacant buildings, which it has made empty by moving residents to other available units on the property. He said he expects the demolition to occur in 30 to 45 days. 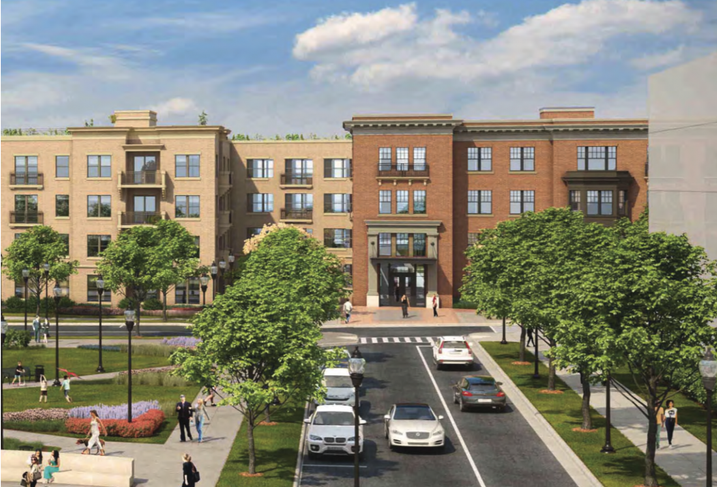 Torti Gallas Urban
A rendering of the two buildings in Phase 1 of MidCity's 1,700-unit RIA development

After that, MidCity will file building permits to start construction on the first phase. The two buildings planned for Phase 1 will include a 200-unit affordable senior building and a 131-unit building. It will set aside the latter as affordable in the short term to relocate residents from other buildings while it constructs the future phases.

In Weinbaum's ideal scenario, if an appeal is not filed, he would expect to have the building permits and financing in place to start construction in the spring. But given the outspokenness of the development's opposition, he is expecting delays.

How long it could be delayed, Weinbaum said, is anyone's guess. Ditto Residential, where Weinbaum worked before joining MidCity last year, had to wait 15 months from the time its 56-unit 301 Florida Ave. NE project was appealed before getting a hearing earlier this month, and the case has yet to be decided.

If the court rules in favor of the opponents, it can set developments back years. Menkiti Group's 901 Monroe project has been stuck in limbo for five years since first receiving approval, with the court three times remanding the project back to the Zoning Commission, where it has to start the process over. Weinbaum said the Zoning Commission estimates appeals could take 12 to 18 months, but given these examples, he realizes it could be much longer.

"I'm thinking '12-18 months? Thanks for giving me that general guideline,'" Weinbaum said. "But you don't know if one round is going to do it and the court is going to dismiss the case. You hope so, but if they don't, how much does that add on? Another 12-18 months? This thing could theoretically stretch on."

Merrifield said the group of Brookland Manor residents he represents does not want to delay the project forever, but has specific changes he wants to see made to the development plans. The group wants more units set aside as affordable and more large units with at least three bedrooms.

MidCity will renew its contract with the Department of Housing and Urban Development to keep 373 of the units affordable through the Section 8 program, more affordable housing than is required by D.C.'s inclusionary zoning law. But given that they are tripling the site's density and the prices of the market-rate units will undoubtedly rise, Merrifield thinks the number of affordable units should also grow.

"There is an affordable housing crisis in the city, and politicians act like it fell from the sky," Merrifield said. "MidCity's plan is a case study in why we have this crisis and how it occurs. It occurs through approval of these projects that demolish and eliminate affordable housing while increasing density on sites affordable housing used to be on." 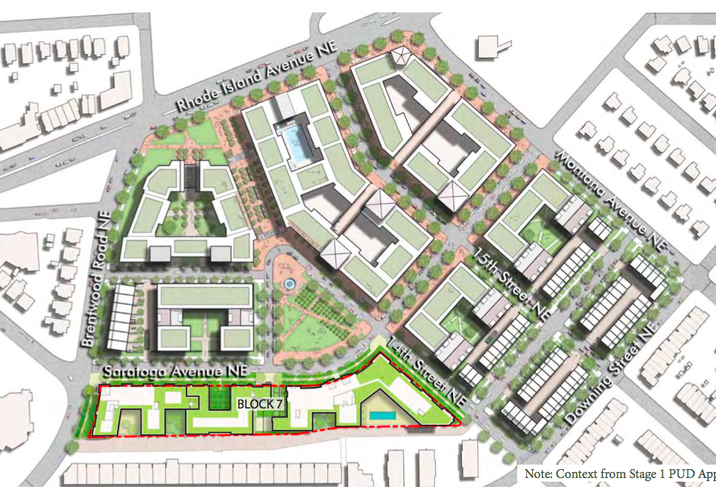 Weinbaum believes building more overall units will help alleviate pressure on the city's housing market, and creating a mixed-income community will benefit everyone by preventing the "concentration of poverty."

"I'm looking at housing at all different levels on the economic spectrum," Weinbaum said. "Additional density is a way that we should all be looking at tackling this growing challenge with regard to ensuring our city remains affordable for everyone."

MidCity had originally wanted more density than is now planned. Following Zoning Commission recommendations that its original 2,235-unit proposal did not comport with the city's Comprehensive Plan, MidCity in 2015 shaved roughly 500 units from the plan and lowered the maximum building heights from 90 to 65 feet.

Weinbaum said he still hopes to get some of that lost density back. D.C. is working on an update to the Comprehensive Plan, and he said it could allow for more density on the side of the development facing Rhode Island Avenue. If that change does occur, he said MidCity intends to increase the height and density of the buildings fronting the avenue when it submits the more detailed Stage 2 application for that phase.

The full development plan also includes a central public park and 181K SF of retail, where MidCity is working to sign a grocery store anchor. Weinbaum said an appeal that delays the development would primarily hurt the residents who would like to see these types of amenities added to the site.

"It prohibits us from bringing a new vitality to the area," Weinbaum said of the potential delay. "We're not able to build anything and our residents and neighbors aren't able to take advantage of it. They're underserved from a grocer and fresh food perspective." 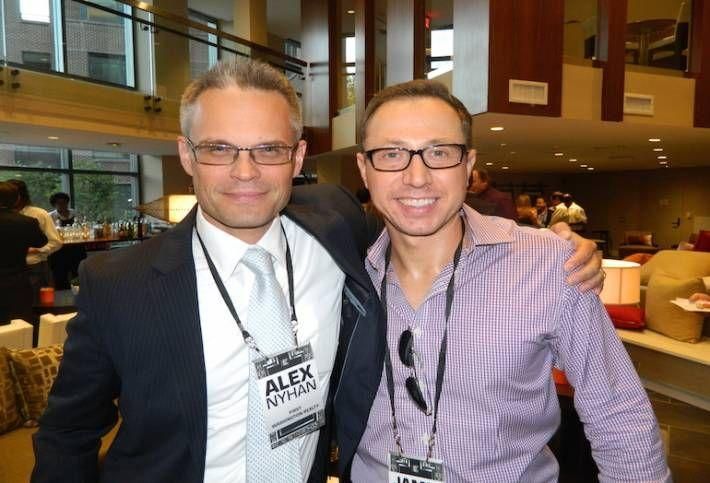 But Weinbaum believes the problem is larger than this particular development. He said the surge of appeals delaying projects throughout the District has developers shying away from the PUD process altogether. On another site near the Rhode Island Avenue Metro, MRP Realty scrapped the PUD for its 1,631-unit development and instead decided to build within the existing zoning, reducing the project's density by about 200 units.

Avoiding the PUD process also takes away the opportunity for community members to negotiate public benefits and will lower the overall quality of the developments pursued throughout the District, Weinbaum said.

"I believe there will be impacts felt across the city if this continues," Weinbaum said. "If fewer people do PUDs, there are fewer ambitious opportunities. If this had been the climate a few years ago, would we have The Wharf? Would we have The Yards?"