How Union Market Has Become The Front Line Of D.C.'s Activist-Developer War

The Northeast D.C. industrial neighborhood around Union Market has become a hotbed for development, with more than 6,000 new residences planned for the area. But it has also recently turned into a battleground in the citywide fight between developers and neighborhood activists, with more than 3,500 of its units facing legal challenges from a single group. 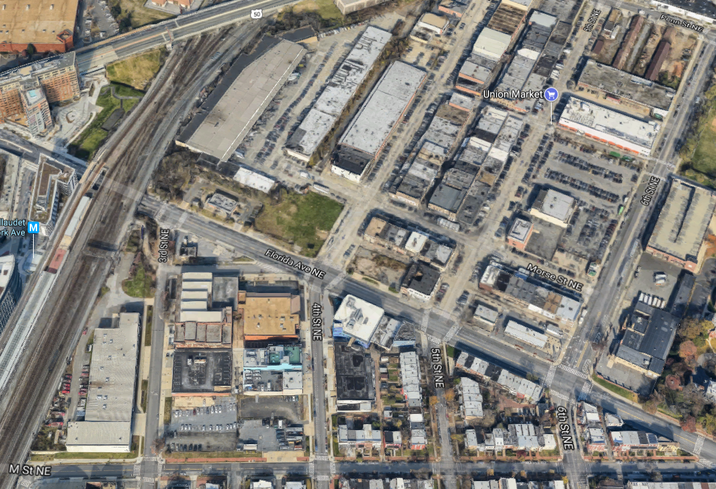 Google Maps
An aerial view of the eastern edge of NoMa and the Union Market district, a largely industrial area where developments are planned on nearly every corner

Union Market Neighbors, a group made up of only a handful of neighborhood residents organized by well-known activist Chris Otten, has appealed the D.C. Zoning Commission's approval of five Union Market-area projects in the D.C. Court of Appeals since mid-2016, with the appeals of the three largest developments coming in just the last two months.

The projects facing appeal total at least 3,500 housing units and more than 250K SF of retail. On the sites of old warehouses, wholesale retailers and parking lots, the projects promise to turn the gritty industrial district into a walkable and vibrant urban environment. But Otten's group stands in the way of that development wave.

"Union Market Neighbors are concerned that explosion of development at what is the only wholesale market in the District (utterly demolished by these projects and pushed to who knows where) will result in a downtown sized luxury playground with no affordable family housing units," Otten said in an email to Bisnow. Otten; his lawyer, Aristotle Theresa; and the group's top neighborhood representative, Ilaf Ayyash, declined multiple requests for an interview. 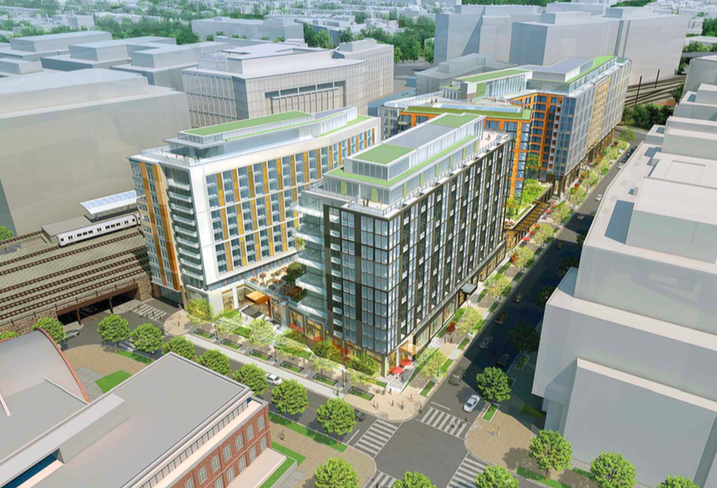 On Sept. 11, the group appealed the three-building development on the site of the Central Armature Works building at Third and M streets NE, where Trammell Crow/High Street Residential plans to build 450 apartments, 200 condos, a hotel, retail and public space. On Aug. 21, it appealed the four-building Market Terminal project next to the tracks north of Florida Avenue where Kettler plans to build at least 800 units, office, retail and a public plaza. On July 17, it appealed the Sixth Street development where Gallaudet University is teaming up with JBG Smith to build 1.2M SF of residential, office and retail space.

It remains to be seen how long the appeals will delay those three projects, but it has already set two other developments in the neighborhood back significantly.

The group appealed Ditto Residential's 56-unit apartment project at 301 Florida Ave. NE in July 2016. That case now has a hearing set for Oct. 12, a full 15 months after the appeal was filed. It typically takes at least another three months after the hearing for the judge to make a decision, a lawyer who was worked on similar proceedings said, and there is no guarantee the judge will allow the project to move forward.

Two projects — Vision McMillan and 901 Monroe — have had their approvals vacated by the judge and had to go back to the Zoning Commission. Neither one has broken ground.

With the most recent appeals, a total of 15 approved projects throughout the District, a combined 6,500 housing units, either face appeal or have had their approval vacated by the court. 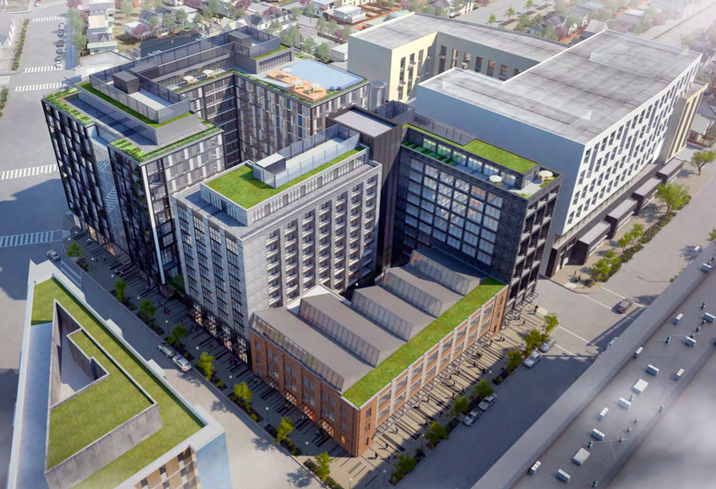 The fifth project in the sights of the Union Market Neighbors group is Foulger-Pratt's Press House at Union District, a 1.5-acre mixed-use development at 301 N St. NE that would include at least 372 residential units, a 175-room hotel (with the option to switch that to condos) and 30K SF of retail.

Foulger-Pratt Vice President Adam Davis said the developer had hoped to break ground this fall, but the appeal has delayed the project as it awaits a hearing date.

The project would preserve the historic, three-story warehouse building on the corner of Third and N streets NE, and the developer retained Dochter & Alexander to market the space to a potential restaurant user. About 30 of the project's units would be affordable, with half reserved for those making less than 50% of area median income, and the rest for less than 80%.

"I guess they're not interested in affordable housing," Davis said. "It's hard to say what their real motivation is. Just general disruption of development in Washington, D.C."

Before appealing the project, Otten filed a written opposition during the Zoning Commission hearing that listed environmental impact, strain on public utilities and rising neighborhood property taxes among his concerns.

Otten said the group wants the city to require 30% of new residential units around Union Market to be designated as affordable and is calling for a neighborhood-wide property tax freeze.

"There are absolutely no protections from the impact of the 20+ high-density projects to the surrounding communities," Otten wrote, citing health, social, infrastructure and transit concerns. "There has been no equitable sharing of costs by the developers engaged on these projects to protect D.C. residents living and working here now or to upgrade the transit systems that these developers are banking on to sell their housing units." 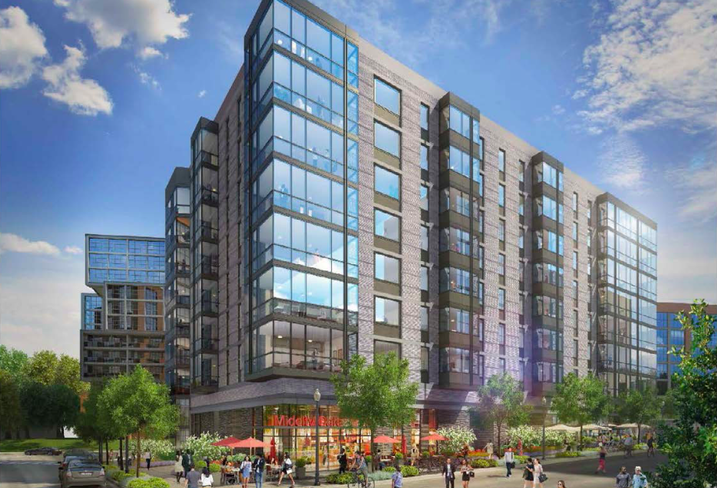 While one of Otten's main criticisms has been that the projects do not have family-sized housing units, the first development his group decided to appeal would bring large apartments, intended for families, to the neighborhood.

Ditto Residential's project, planned for the small triangle bounded by Florida Avenue, Third and N streets, is designed with three- and four-bedroom units. Unlike its Oslo co-living projects with four-bedrooms units designed for young college graduates, owner Martin Ditto said 301 Florida was created with a style that would appeal to families.

Ditto had hoped to break ground by this summer, but now with an October hearing date, he likely will not be bringing out the shovels until the first half of next year at the earliest. The project received unanimous support from the local Advisory Neighborhood Commission and no opponents spoke out during the Zoning Commission hearing. After it received approval in June 2016, Union Market Neighbors filed a motion for the commission to reconsider the project, and then appealed it in court.

"We’re disappointed that a project that has absolutely no objections from the community and provides housing that is more likely to be used for families is being held up," Ditto said. 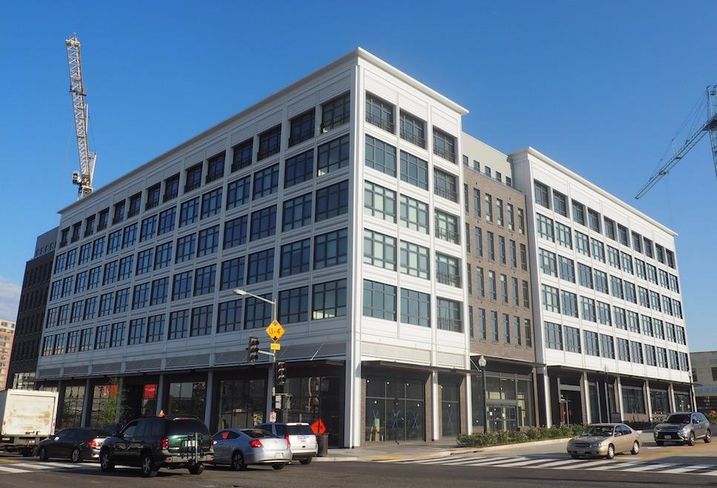 Across Florida Avenue from Ditto's project, the first wave of Union Market's development is moving along quickly. Some projects managed to get entitled and underway before the group started filing appeals. But developers who are building those projects still do not want to see their neighbors delayed.

The team of Level 2, Federal Capital Partners and Clark Enterprises broke ground in February on The Highline, a 318-unit apartment building with 10K SF of ground-floor retail at 320 Florida Ave. NE. Federal Capital Partners Senior Vice President Wade Casstevens said The Highline is designed with small units, and having Ditto's across the street would complement it by appealing to a different demographic.

“We certainly would want to see some of those guys get started so a sense of place can be developed,” Casstevens said.

Directly to the east of The Highline, LCOR last month completed The Edison, a 187-unit project where Trader Joe's will open next year. Just north of that building, a 432-unit mixed-use project anchored by a ground-floor Latin marketplace broke ground last summer.

Just south of Foulger-Pratt's development at the corner of Third and M streets, a 425-unit project with 10K SF of retail is planning to break ground before year-end. The Wilkes Co.'s project received Zoning Commission approval in late 2015, before Union Market Neighbors began filing appeals. Wilkes worked with neighboring developers Foulger-Pratt and Trammell Crow to design consistent streetscape features and make Third Street a cohesive corridor, but now its two neighbors are held up in court.

"The projects are clearly complementary of one another," Wilkes Co. President Berkeley Shervin said. "It would be a shame if they didn't move forward. But we're operating under the assumption they will." 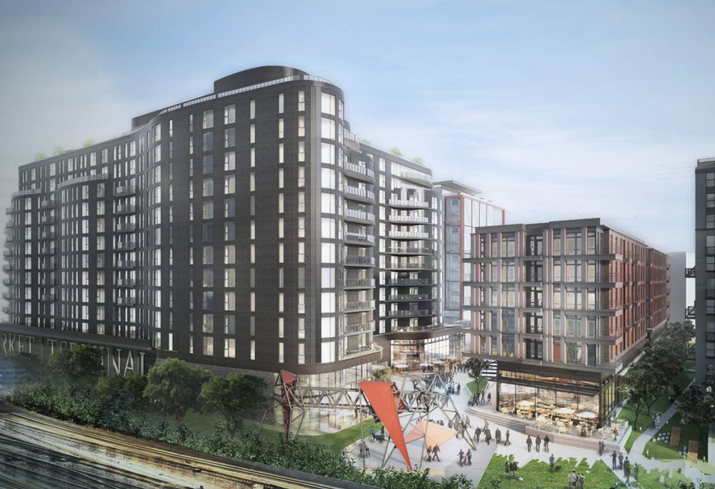 The Union Market Neighbors activist group began last year by appealing Ditto's comparably small project, but the group has since begun to take on massive developments and major institutions.

This summer, the group appealed the two largest projects planned in the area, both major multiphased projects north of Florida Avenue on either side of Union Market planned by some of the region's biggest developers.

Kettler's Market Terminal project would add four buildings with at least 800 units combined, plus office, retail and a potential hotel to the site bounded by New York Avenue to the north, Metro and Amtrak tracks to the west and the under-construction Florida Avenue and Fourth Street projects to the south and east. The development would extend Third Street up north of Florida Avenue through the site and create three public park and plaza spaces. Kettler recently partnered with Carr Properties for the project's office component and had hoped to break ground in early 2018.

The Zoning Commission approved the project in March after the ANC voted unanimously to support it, and no one spoke in opposition during the public hearing. Union Market Neighbors, which did not participate in the public Zoning Commission process, then appealed the development in August. Kettler declined to comment.

The JBG Smith-Gallaudet project, still in the early planning stages, would develop four separate parcels along Sixth Street to the south and east of Union Market with roughly 1,700 residential units, plus a mix of retail, potential office, university space and public open areas.

The project received first-stage PUD approval, detailing the overall height and mass of the buildings, in May. It still has to get a more detailed, second-stage approval before breaking ground, but Union Market Neighbors in July appealed the first-stage PUD. The developer can still work on the design process as it goes through the appeal, but it adds an extra challenge and signals that the final approval could also be appealed.

Next to the JBG Smith-Gallaudet project on the corner of Fifth and Morse streets NE, LCOR is planning a 280-unit project with 20K SF of retail. The developer, which just delivered The Edison at the corner of Fourth and Florida, received approval for the 530 Morse St. NE project this month. The activist group has not appealed the project yet, but still has the opportunity to do so before LCOR breaks ground.

"Is that a risk? Sure," LCOR Vice President Matt Hard said. "But it's not one we're intimidated by. We think we rest on substantive grounds."

Union Market Neighbors did not participate in the project's Zoning Commission process, during which the ANC unanimously supported it and no one spoke out in opposition. Hard said the group's pattern of waiting to come out in opposition until after projects are approved makes it difficult for developers to cooperate with them in the design stage.

"They're not even giving applicants an opportunity to address their concerns because they're making them after the turkey is baked," Hard said.