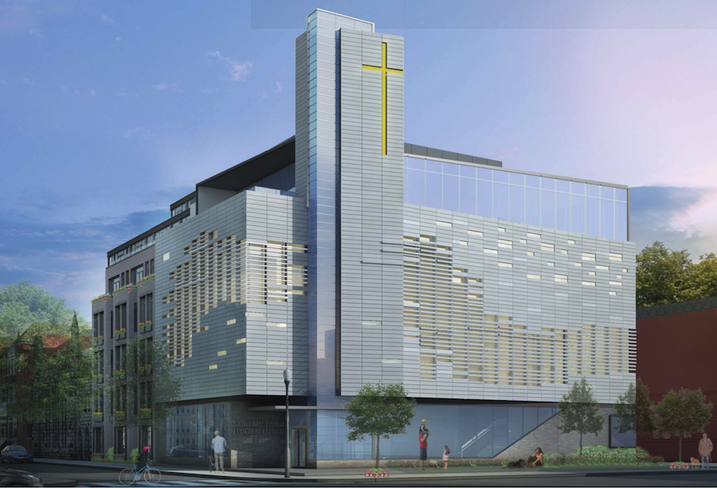 The redevelopment of a Dupont Circle church that would include 56 residential units has just been blocked by a court more than a year after construction began.

The D.C. Court of Appeals vacated the Board of Zoning Adjustments' approval of the project at 1772 Church St. NW, sending the proposal back to the board, Washington City Paper reports.

St. Thomas' Episcopal Parish is leading the efforts to redevelop its property, in consultation with CAS Riegler and Hickok Cole, into a seven-story building with 56 residential units and a place of worship. It celebrated a groundbreaking on the project in February 2017.

The development received approval in January 2016 from the Board of Zoning Adjustments. Projects in front of the BZA have only minor requests to depart from a site's zoning and are typically smaller than the Zoning Commission-considered planned-unit developments, which have been the focus of an unprecedented series of appeals in recent years.

The church and its partners went in front of the BZA to request a variance from the requirement that the building not occupy more than 80% of the lot, while their proposal surpassed that by roughly 6.7%. The BZA granted that exception, but then the Dupont Circle Citizens Association appealed it in September 2016.

The appeal was before the D.C. Court of Appeals for over 18 months before the court vacated the approval in a decision filed Thursday, concluding the parish did not adequately demonstrate it had an exceptional condition worthy of the flexibility.

The decision follows two instances in recent history when the court has vacated the approvals for major PUD projects. It blocked the $720M McMillan development in December 2016, and that project was just appealed again last week. The court also blocked Menkiti Group's 901 Monroe project in Brookland three separate times. Those decisions set off a rapid string of appeals that have delayed over a dozen projects and thousands of housing units across the District.