Three more tenants have signed up for space in CityLine Sunnyvale as work continues on the 36-acre downtown development. 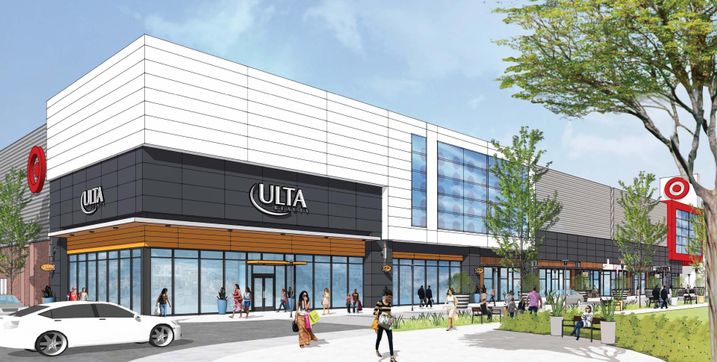 Courtesy of SGPA Architecture and Planning
Ulta Beauty will occupy 10.4K SF of CityLine Sunnyvale, joining a lineup of other tenants and residents ready to move into the downtown area.

Cosmetics chain Ulta Beauty, Xfinity and Kids Care Dental & Orthodontics will each occupy part of the mixed-use project, developers Sares Regis Group of Northern California and Hunter Storm said Thursday. The trio joins a handful of other retail tenants coming to CityLine, including AMC Theatres and Whole Foods Market, both of which are expected to open this year.

Ulta Beauty will occupy 10.4K SF of ground-level space at the corner of West McKinley and Murphy avenues, while Xfinity and Kids Care Dental & Orthodontics have signed ground-level leases for 5.4K SF and 3.3K SF, respectively.

The latter two tenants will occupy ground-floor portions of SRGNC’s multifamily development The Flats, which makes up the residential portion of Phase 1 of CityLine. Currently in Sunnyvale’s entitlements process, plans for Phase 2 have called for almost 800 residential units, 168K SF of retail and 650K SF of office.

Meanwhile, the joint venture has leased up much of CityLine’s first phase. It broke ground on a 75-unit expansion of The Flats after filling the existing 198-unit section, and it is wrapping up construction on its two-story retail building it leased to AMC Theatres and Whole Foods in 2017.

In September, it brought on an additional five retail tenants to a combined 32K SF.

Buoyed by the region’s strong job growth, Silicon Valley retail has tended to outperform much of the nation over the past year. Combined, Sunnyvale and Cupertino finished last year with a retail vacancy rate of 2.1% and an average asking rent of $38.32 per SF, topping regional averages in both metrics, according to Cushman & Wakefield.

In CityLine, SRGNC and Hunter Storm have aimed for a diversity of retail offerings, Hunter Properties Director of Development Joshua Rupert told Bisnow in late September.

"They all add something different, and ultimately are all very complementary of what we envision for downtown Sunnyvale in the future," he said at the time.