An active Peninsula developer has broken ground on a new batch of housing for its expansive Sunnyvale project. 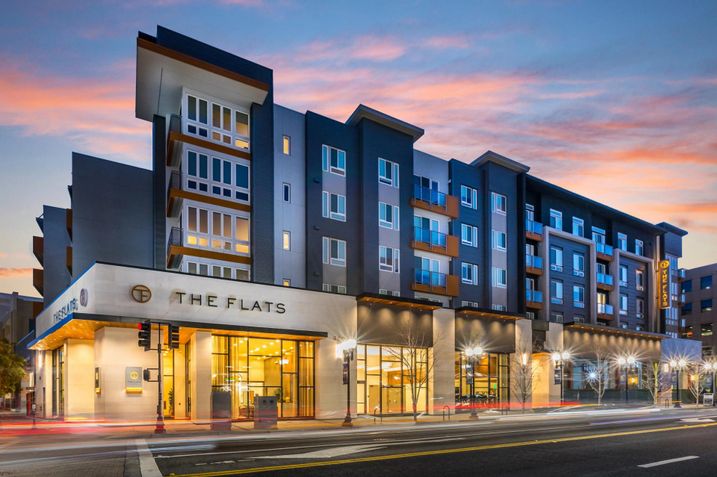 Courtesy of Sares Regis Group of Northern California
A rendering of the 125K SF, 75-unit expansion of The Flats in Sunnyvale, Calif.

Sares Regis Group of Northern California has begun construction on its 125K SF, 75-unit expansion of The Flats, an existing 198-unit apartment community open since 2018 in downtown Sunnyvale, the company said on Tuesday.

SRGNC's residential project, which is currently fully leased, is central to the larger CityLine Sunnyvale development led by a joint venture of it and Hunter Properties, and it is successful for a few reasons, Sares Regis Group Assistant Vice President Travis Duncan says.

"The opportunity to live downtown cannot be overstated, across the Peninsula," Duncan told Bisnow. "And not a lot of development happened in Sunnyvale in previous cycles."

When fully complete, CityLine is expected to include over 1,000 housing units, over 250K SF of retail and 650K SF of office. Phase 2, which is in the entitlements process, is supposed to consist of the entire office component and nearly 800 of the homes.

Later this year, SRGNC and Hunter Properties hope to finalize a development agreement for the second phase with the city, which is also working out an environmental impact report and specific plan for its downtown that are crucial to the joint venture.

Last year, CityLine signed a variety of retail tenants, including Pacific Catch and AT&T, and construction is close to wrapping up on a two-story retail building leased by AMC Theatres and Whole Foods, according to Duncan.

Move-ins for the next 75 units coming to The Flats, which include one-, two- and three-bedroom apartments, are expected to start next year, with nine designated as affordable for low-income residents.