It is no surprise that Silicon Valley, one of the most expensive places to live in the country, is one of the hardest-hit regions when it comes to the housing crisis.

But, amid all the challenges, from the rising costs of construction and labor to the ups and downs of federal and local funding, the single greatest reason the housing crisis is not being addressed is a lack of will, SV@Home Executive Director Leslye Corsiglia said.

"We have a lot of issues with neighborhood opposition and with the need for both community and political will to be able to approve the housing that we need," she said.

Instead there are neighbors that resist any affordable housing project going up nearby and policies that limit where housing can go, she said.

The event, which kicked off with a keynote from San Jose Mayor Sam Liccardo, had discussion ranging from the state of the market in Silicon Valley to a deep dive on opportunity zones to the need for affordable housing.

Harasz said SCCHA has a "Housing Ready Community" campaign that focuses on bringing communities on board for welcoming affordable housing.

Too often there is an outdated perception that the affordable housing of today is like the public housing of the past, but Harasz emphasized that SCCHA builds its housing to market standards. When communities come out to object to those projects, every concession that is made, whether adding more parking or an open plaza, adds to the cost and takes away from the project, she said. Sometimes changing minds means changing the conversation.

"We're trying to start a lot of small local conversations around this topic so that folks will be willing to recognize that part of our traffic problem is a housing problem," Harasz said. "If we can get folks living and working in closer spaces, we can do something about our overall traffic and our quality of life."

Corsiglia said there is growing regional and state attention to the need for more housing, and more affordable housing.

Gov. Gavin Newsom has addressed the housing crisis head-on, proposing $1.75B in his budget to spur housing production and signing an executive order to build affordable housing on excess state lands.

Corsiglia also is co-chair of CASA Committee to House the Bay Area, which has put forth the CASA Compact as a 15-year plan to address the region's housing needs through new policy.

She said CASA brought together leaders to talk about how to address the housing problem as a nine-county Bay Area rather than continuing to tackle it city by city, which is not working.

The CASA Compact includes calls for cities to offer streamlined approval for projects with an affordable housing component, state legislation for minimum zoning near transit and a regional cap on rent increases. Those changes would require state legislation, regional ballot measures and amendments to housing policy. The plan has received mixed responses from city leaders around the region, from support to opposition from those worried about giving up local control. A package of bills aimed at moving forward the ideas of the compact was introduced in the state legislature late last week.

There are also local efforts, such as Santa Clara County's Measure A, which passed in 2016 to fund $950M for housing and is being distributed to finance new units, she said.

Funding continues to be highly sought after and a sticking point for those developing affordable housing projects. The availability of federal funds and tax credits has shifted over the years.

One of the largest ways that affordable housing is financed is through Low Income Housing Tax Credits, Harasz said. Through LIHTC, a developer receives financing, builds the project and then over 15 years delivers depreciation and tax breaks to the institutional investor.

When the program first started, investors were paying less than a dollar for every dollar of tax credits delivered, Harasz said, but as the program grew in strength, that shifted. She mentioned two projects next to Diridon Station in San Jose that at the peak were getting about $1.20 in funding for every $1 of tax credits.

But after the 2016 election, the anticipation of the tax cuts and corporations needing fewer tax credits meant the price dropped. Harasz said that opened up funding gaps, such as for a project in downtown San Jose that didn't close in time and suddenly had a roughly $4M funding gap due to the price of tax credits dropping. The city came in with federal funds to help close that gap, but it has been a challenge, she said.

Just last week, the Department of Housing and Urban Development announced it would expand a program to expedite federal mortgage financing for LIHTC projects. By speeding along financing approval, the program is intended to drive more interest from opportunity zone investors, who have to invest within a certain time frame to benefit from the tax advantages that come with opportunity zone investing.

Affordable housing lost out in 2011 when redevelopment agencies shut down and that source of funding was no longer available. SCCHA was a big user of redevelopment funds to build its portfolio, Harasz said.

In San Jose, the city used to receive $40M in redevelopment funding annually for affordable housing and the county received about $60M, according to Corsiglia.

"In its place, there has really been a patchwork of options and different programs that cities have tried to pull together, but, frankly, it hasn't been replaced," she said.

Affordable housing can cost about $600K to $700K per unit depending on the density and community benefit costs, she said. To make that work and have affordable rents, there have to be subsidies, and they are often cobbled together from seven or eight funding sources.

So something new like opportunity zones could help as part of that equation.

"As we look at things like opportunity zones and the potentials there for what they can do to help with that gap, it's very intriguing and interesting to us," Corsiglia said.

Check out a slideshow from the event below. 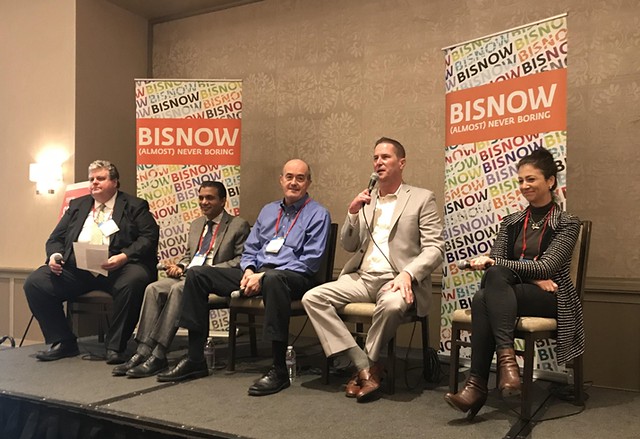