CRE professionals have a relatively positive outlook for Bay Area real estate for the next three years. The recent Allen Matkins/UCLA Anderson Forecast California Commercial Real Estate survey showed renewed optimism across multiple markets over that time frame, due in part to increased investor activity in the last half of 2017, the tax overhaul and a strong stock market. The biannual survey projects a three-year outlook for California’s commercial real estate markets.

Panelists in the summer survey revealed some pessimism across multiple markets due to the length of the cycle and a slowdown in transactions and activity. Six months ago, a lot of people thought real estate would run its course and activity had slowed down, but the last half of 2017 proved the opposite, according to Allen Matkins Operating Partner John Tipton.

“In the last six months not only did it become clear it’s not teetering out, but it's actually strengthening," Tipton said.

CRE professionals are relatively bullish on office, industrial and multifamily, but not on retail, he said.

Check out how Bay Area markets fared below:

Office fell below 50, the line between optimism and pessimism, for the first time in two years for San Francisco and for the first time since June 2016 for the East Bay and Silicon Valley. Below 50 signals optimism. Panelists only were pessimistic about office vacancy rates.

Despite the shifting sentiment, two-thirds of the panelists stayed on the sidelines of the market for the last 12 months, and a similar amount said they plan to stay there for the next 12 months. Bay Area panelists are signaling that office markets will be similar in three years and not enough improvements exist to jump in and build significantly, according to the report.

Survey respondents tend to grow pessimistic about the San Francisco markets earlier than in other markets because the area usually rebounds more quickly after a recession and is expected to end its cycle earlier as well, Tipton said. With unemployment so low, job growth has slowed, and panelists believed the region was reaching an equilibrium in previous surveys.

The tax reform passed in December has changed some of these sentiments. It has made commercial real estate a more attractive investment through changes in deductibles and tax rates, which helped improve overall sentiment for the future of office, Tipton said.

In the last survey, panelists revealed the strongest pessimism in Bay Area industrial since 2009. Many believed the market could not get much better with 2% vacancy rates. The latest results switched back to optimism.

Higher spending among consumers following tax reform is expected to result in a greater need for industrial and not enough industrial exists. Occupancy rates are expected to hold steady and rents could rise in the next three years, according to the report.

“Industrial throughout the state has been very, very strong for a number of years,” Tipton said. “There is a lot of demand and not all that much supply.” 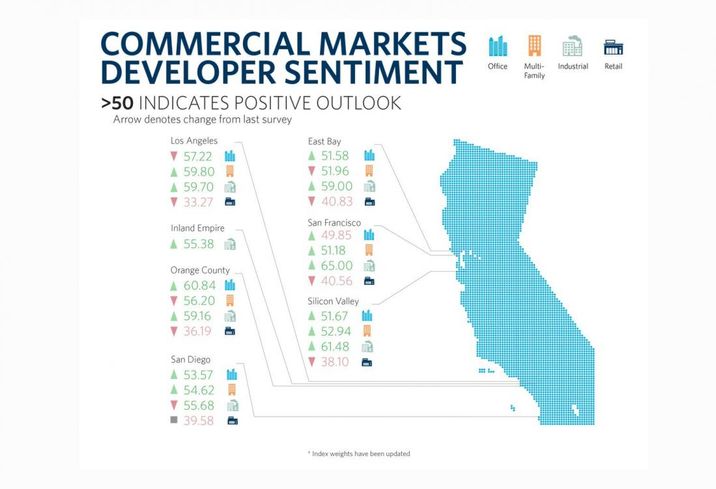 Courtesy of Allen Matkins and UCLA

Given the tax overhaul will shift taxes for homeowners, it may make renting slightly more favorable, Tipton said. Multifamily remains a steady market for Bay Area CRE, he said. Panelists expect multifamily to remain strong in the next three years. About two-thirds of all developers surveyed said they have plans to start at least one project in 2018 and half are planning more than one project, according to the report.

Panelists in both Northern and Southern California held negative views on the future of retail, according to Tipton. Despite strong holiday sales and a strengthening economy, panelists remained largely pessimistic about the industry's future.

None of the Bay Area retail developers started a project in 2017 and a little over 10% said they plan to start one this year, according to the report.