Pessimism In Some California Markets Increases In Recent Survey

California’s commercial real estate markets could slow down in the coming years. The latest Allen Matkins/UCLA Anderson Forecast California Commercial Real Estate Survey revealed an ebbing of market optimism from developers. The survey gives an outlook for the next three years in California’s commercial real estate industry and details opportunities and challenges in office, multifamily, retail and industrial. 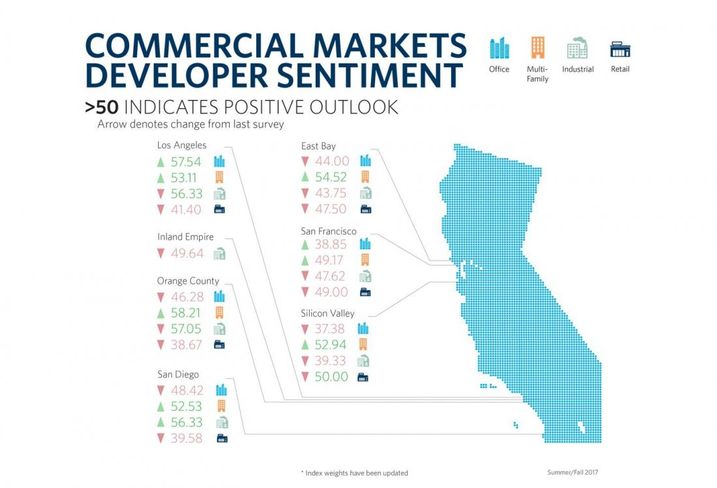 Gross domestic product growth was under 2% during the first quarter, employment has slowed and orders for durable goods have flattened. While this does not indicate a coming recession, many developers are expecting a softening in commercial real estate by 2020. Construction for office and retail is expected to slow. Industrial and multifamily construction will continue to grow, but at a slower pace than previously.

Check out what panelists thought of each market below.

Continued pessimism remains for Bay Area office markets, which developers have viewed with negativity for the past two years. Panelists expect inflation-adjusted land prices to abate by 2020 and do not expect occupancy to remain at current levels. Only 38% of developers are considering starting new projects due to increases in subleases and a slowing of tech hiring in the Bay Area.

The bright spot in the survey is the LA office market. Developers view the Los Angeles market with optimism. Activity in Hollywood and Silicon Beach will continue to bolster demand for office.

“A lot of investment funds see the Los Angeles market as a very attractive market in the U.S. generally,” Allen Matkins partner John Tipton said. “Both the entertainment and tech industry are remaining very strong as far as growth. The panel believes ... the demand will stay high for rents and occupancy.”

While the industrial outlook has typically been positive since land for industrial tends to be scarce, the recent survey revealed negativity in Bay Area industrial markets, Tipton said. The industrial segment has been strong during the past few years and the general sentiment is the extremely hot market has already started to cool and will start growing at a more sustainable pace. Vacancies remain low, and 87% of panelists started new projects within the last year.

In Southern California, optimism remains high, especially with double-digit online sales and increased imports from Asia driving a need for more warehouses. E-commerce will continue to drive a need for warehouse space throughout the state, but not as much as previously.

Opinions on the future of retail remain decidedly dismal. In about every market, developers have a negative view of retail. A little over one-third of panelists did some retail last year with over half planning on some this year. About 40% of retail developers are not starting projects in the next 12 months in Southern California. Los Angeles, San Diego and Orange County all reached new levels of pessimism compared to some level of optimism in the June 2016 survey.

Retailers are responding by creating experiences and giving people reasons to leave their houses and go to a center, Tipton said.

Multifamily has long been a rock-solid part of the survey, since people need a place to sleep, Tipton said. In the last survey, many panelists suspected mid- to high-end multifamily had peaked and land and building prices edged out low-end projects. The sentiment has since reversed.

Even with supply meeting demand, home prices have not decreased, which continues to drive a need for apartments throughout the state. With some families unable to afford rents in some areas, developers are seeking additional options for more affordable units.

“People are building additional multifamily stock in lower-rent areas to meet the demand,” Tipton said. “[Developers] are going further out and building stock to meet that demand.”