With Post-Industrial Authenticity, Creative Office Is Philly In A Nutshell

For years after the collapse of the manufacturing industry, Philadelphia’s office market was an afterthought on the East Coast. But the city’s history and value have driven its rebirth in the past decade, and the creative office market built from the bones of industrial space is that renaissance in microcosm. 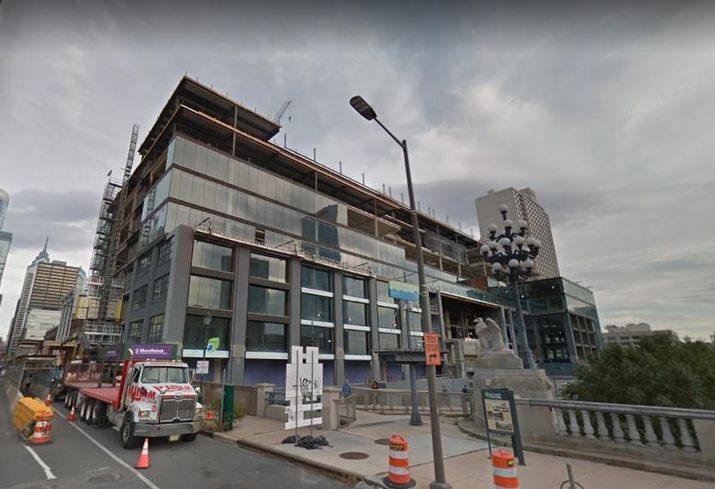 Google Maps
The redevelopment of 2400 Market St. in Philadelphia, seen under construction in November 2017

There is 6M SF of creative office space in Philadelphia, a drop in the bucket of the city's office market. By comparison, the Market West submarket of Center City has 29M SF. But like coworking, it has had a larger influence across the city than its raw square footage would imply.

Though creative office is defined more by feel than any hard-and-fast rules, JLL categorizes office space as creative if it is a redevelopment of industrial space that preserves some of the factory floor’s openness, as well as its external appearance of age, with interior space built in a more integrated and communal fashion than traditional office. Nontraditional amenities or location also contribute to an office’s designation as creative, although a prime location is not disqualifying.

The younger portion of the workforce has been viewed as demanding authenticity, or at least a sense of uniqueness that traditional suburban office parks and fluorescent-lit cubicles don’t have.

Office developers often attempt to replicate the character of creative office or coworking in their new buildings by including more social spaces and amenities traditionally associated with apartment buildings, like public outdoor space, neighborhood-style retail on the ground floor and so on.

Nowhere is creative office’s popularity more evident than at the former auto showroom at 2400 Market St., which has been a rousing success since it kicked off construction last year. PMC Property Group and Lubert-Adler Real Estate Funds redeveloped the four-story, 300K SF structure and added 300K SF in five new floors atop the existing building, all of which were pre-leased to Aramark.

The lower four stories have leased up at a rate much faster than many expected, considering it does not come with the tax benefits of residing in a Keystone Opportunity Zone, JLL Research Director Lauren Gilchrist said. Of the 225K SF remaining in the building, all but 30K SF has been leased with the building’s opening still weeks away.

The adaptive reuse of a building with a non-office history, in a spot previously considered no-man’s land, makes it among the highest-profile creative office projects in the city, with a “cool factor" many tenants see as a key element in recruitment.

The East Market development’s office building, 1100 Ludlow, also has been labeled creative space by JLL — fittingly, it is where The Design Center moved from 2400 Market — and is also having significant early success at rents competitive with the rest of Center City’s Class-A product.

“The creative buildings within the city core can attract everything, even blue-chip, publicly traded companies,” JLL Vice President Alex Breitmayer said. “Those companies might not want to be in a 1960s-era office building, or they want to be there but also have an innovation lab or a different feel within their office footprint [in a creative office].” 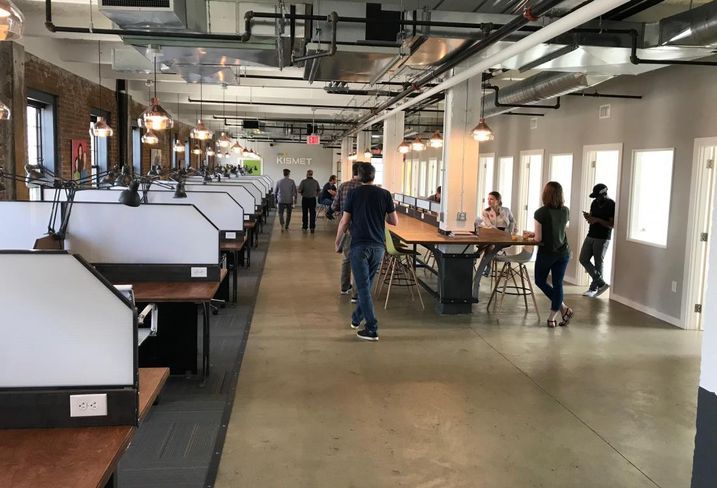 Creative office in the central business district can compete with traditional Class-A space for every type of tenant, but there is a growing movement north of the city’s core where the niche arguably finds its truest form.

The Riverwards, broadly defined as the area of near Northeast Philly comprising the neighborhoods of Northern Liberties, Fishtown, Kensington and Port Richmond, contain nine buildings that JLL tracks as creative office, all of which are 100% occupied. When describing creative office, especially outside of the core, the scale of the discussion shrinks dramatically — four of the nine are smaller than 30K SF — but space like that serves a crucial function for companies not ready or willing to pay Center City rents.

Arts & Crafts Holdings has been redeveloping the Callowhill/Spring Arts neighborhood at a rapid pace, more rapid than General Partner Craig Grossman ever expected, thanks to the popularity of the creative office it is creating. In the company’s nearly 1M SF of office in the area, no tenant has leased more than 21K SF, and most of them have taken spaces much smaller, in shorter-term leases averaging about $21/SF, according to Grossman.

“The majority of our tenants are smaller than midsize groups, so we feel like we’re mitigating our risks and taking calculated risks by leasing a few thousand square feet at a time,” Grossman said. “When none of these groups have any significant credit, the question is, what do you go on? And it’s definitely faith-based.”

The city of Philadelphia and its business attraction initiatives have long been touting the startup and innovation community as proof the city is fertile ground for investment. The educational institutions of University City are front and center in such promotional conversations, and the coworking industry has built itself up as the logical next step for entrepreneurs just out of school.

But there is a long way between two desks at a WeWork and the high-profile office lease in Schuylkill Yards that homegrown success story Spark Therapeutics signed, and cheaper space in emerging neighborhoods can fill that gap.

“We’ve definitely had our fair share of smaller businesses or startups that came from coworking, graduated and looked for their own brick-and-mortar space,” Grossman said.

While coworking has grown and changed in form so many times in the past few years that it resists generalizations, it undeniably shares some DNA with creative office space. WeWork occupies a former brewery building in the Piazza at Schmidt’s in Northern Liberties, and Brickstone Realty, one of Center City’s foremost developers of creative office, has leased two of its most recent office redevelopments to coworking operators. 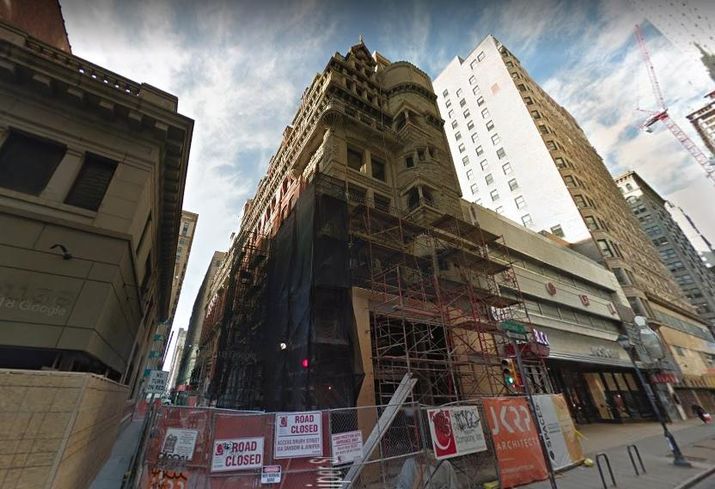 The Brickstone-owned Steele Building and Hale Building both predate nearly all Class-A office buildings in Center City, and in Midtown Village they are closer to the retail heart of the CBD than the main office corridor. Both of those factors place them squarely within the creative office categorization, and Brickstone President John Connors told Bisnow that made them a natural fit for coworking.

“Our view back in 2012 when we started focusing on Midtown Village was that it had already been established as a de facto creative office market hub, and we wanted to take that to the next level by taking extraordinary buildings and testing the waters on coworking,” Connors said. “It was a new concept then, but we thought it would be the perfect host community for it.”

The Steele Building’s entire office component is occupied by The Yard, a New York-based operator that focuses on the smaller entrepreneurs and startups that defined the start of the coworking movement. The Hale Building’s office component will be fully occupied by Spaces, the IWG-owned brand that hews closer to the more enterprise-focused, flexible office spaces that have grown within the industry, when it opens on Nov. 1.

“What you’re seeing now is that the people who want to work in creative office environments care as much about what’s outside their front door as what’s inside their front door,” Connors said. “They want to be able to walk outside into as vibrant an environment as possible, and we think Midtown Village is the epicenter of that.”

Fishtown and Northern Liberties are emblematic of the buzzing residential and retail neighborhoods that foster creative office development, Gilchrist said. But Arts & Crafts has had to create the retail environment in unison with its office development, and its choices of retailers have been instructive. 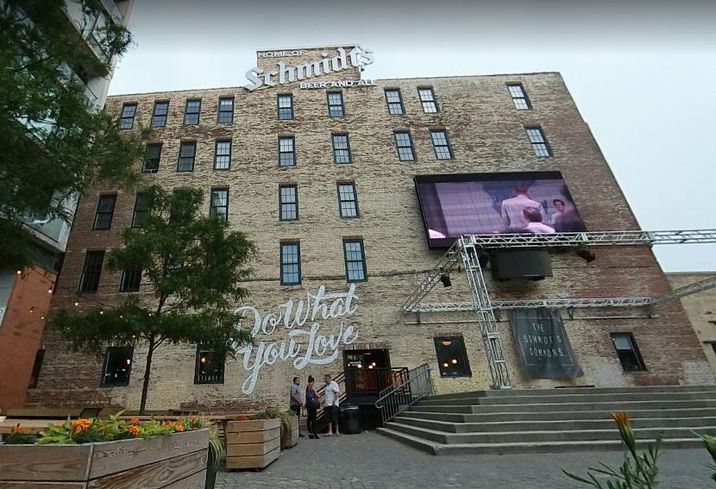 “One thing that we’ve been excited about is taking this ‘district,’ if you will, and embracing the former industrial flavor of it, but reposition it with today’s makers,” Grossman said. “So if you can deliver that sort of experiential component when activating a first floor, whether with breweries, distilleries, coffee roasters or other types of nontraditional retail where they’re actually making things, those are the types of things we’re interested in bringing to the neighborhood.”

Arts & Crafts has also been diligent in bringing in businesses that “you can go to weekly as opposed to only being able to afford a meal once every six months,” Grossman said. That approachability has been at the center of the company’s success in the neighborhood, and is also the heart of Philadelphia’s appeal when compared with New York and D.C.

The city’s multifamily and retail transformation in the 21st century arguably started because it was a cheaper alternative for residents and restaurateurs to New York or Washington, D.C. But the city’s also-ran image from the previous decades of industrial collapse and suburban flight gave it a “grit” and authenticity to which residents still cling tightly. Grossman said Arts & Crafts takes a “dyslexic” approach to choosing tenants because he and his partners want to use their instincts to foster the community that has grown from tenants seeking value and authenticity.

Thanks to the rent gap between Class-A office and creative space outside the core, along with the availability of land and buildings for further development, Gilchrist said that creative office may have a brighter immediate future than traditional office, which is finally at the end of its development cycle.

“There’s a lot of runway for creative office, simply because it’s different and talent attraction is the name of the game,” Gilchrist said. “Location and physical envelope are big factors in recruitment, which is so important in this low-unemployment environment.”