In Greenpoint, a sleepy Polish neighborhood is being transformed into a hipster enclave by a tidal wave of waterfront development. In Dumbo, the city’s smallest neighborhood is being reborn as a tech hub, and in Downtown Brooklyn we’re practically seeing a whole new city being built right before our eyes. 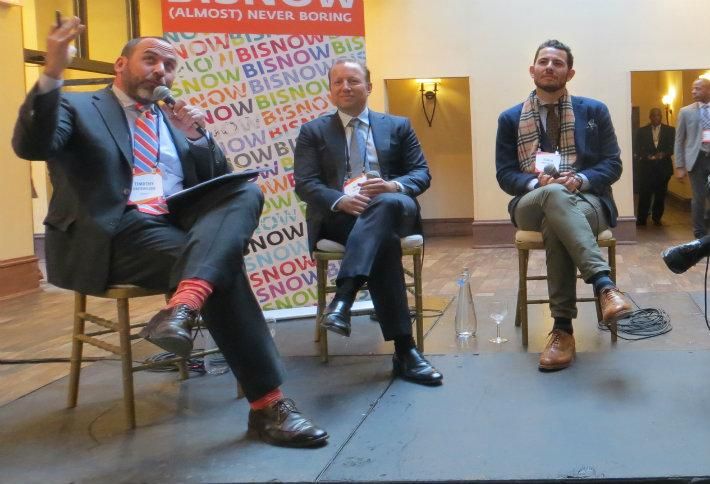 Those were some of the takeaways from Bisnow’s Brooklyn’s Hot Projects and Neighborhoods event, which brought together developers, brokers and others to explain what’s happening to some of Brooklyn’s most in-demand neighborhoods right now.

Midtown South and Dumbo have both been hot spots for tech tenants in recent years.

Unlike the “Google Effect” that boosted prestige and rents after the tech giant bought its own office building in Chelsea, Asher Abehsera, founder and CEO of LIVWRK, thinks Dumbo’s appeal to tech and creative firms is more diverse and organic.

“I’ve always thought it’s the most densely populated ‘creativity per square foot’ urban environment in the country,” Asher (snapped above on the right with Midtown Equities’ Jack Cayre and TitleVest’s Timothy Oberweger) says. “The development of Dumbo has been the perfect marriage of infrastructure and culture.”

Jack agrees, saying the formula for success in Dumbo has been to take the neighborhood’s red brick buildings dating to the 1800s—“buildings with incredible bones”—and “modernize them to provide a cool factor you can’t get elsewhere.”

Jack points to one major deal that’s “broken the ice” for top-tier creative tenants in Dumbo: LA-based ad firm 72andsunny’s lease for the top floor at Midtown Equities' Empire Stores, which broke borough records with asking rent at $85 per SF. 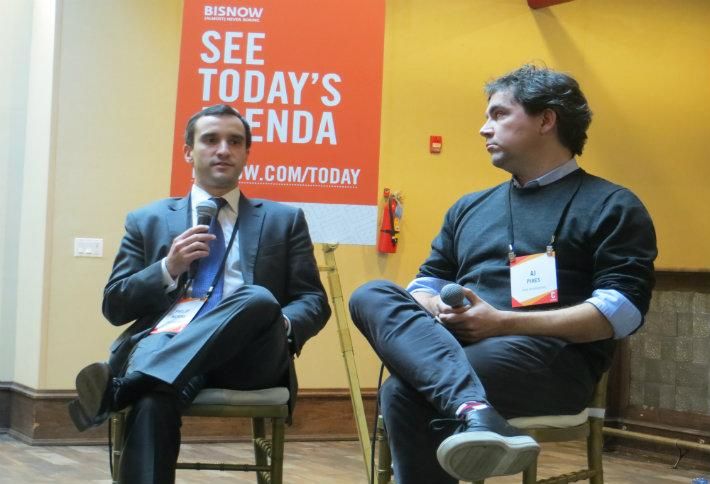 Philip Watkins, a principal at Megalith Capital, says the residential market in Dumbo also has ties to Midtown South.

“We see a lot of young professionals coming here that couldn’t get space in Chelsea or Tribeca, and didn’t want to pay $2,500 or $3k a square foot,” Philip (snapped above to the left, along with AJ Pires, EVP of Alloy Development) says.

Alloy, which got its start in the area developing the loft spaces in 192 Water in 2010, when prices were under $1k per SF, has recently fallen victim to Dumbo’s success—the firm is moving its offices to Gowanus for the cheaper rent. “Jack and Asher are too good at what they do,” he joked. 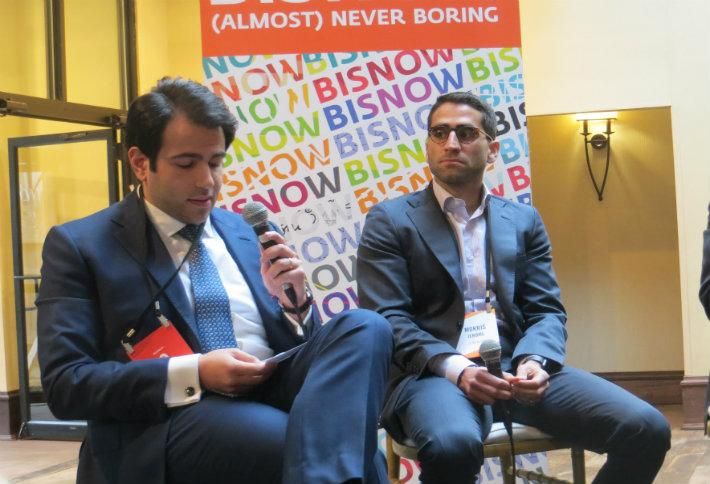 Meanwhile in Downtown Brooklyn, Morris Jerome, a principal at JEMB Realty, says the growth of office and residential development in the neighborhood will lead to a boom in its traditional retail centers.

“We think Fulton Street will continue to be an incredible dynamic retail corridor, but we see Gold Street differentiating by becoming more of an upscale retail corridor,” says Morris (snapped to the left, along with Eastern Consolidated’s Andrew Sasson). 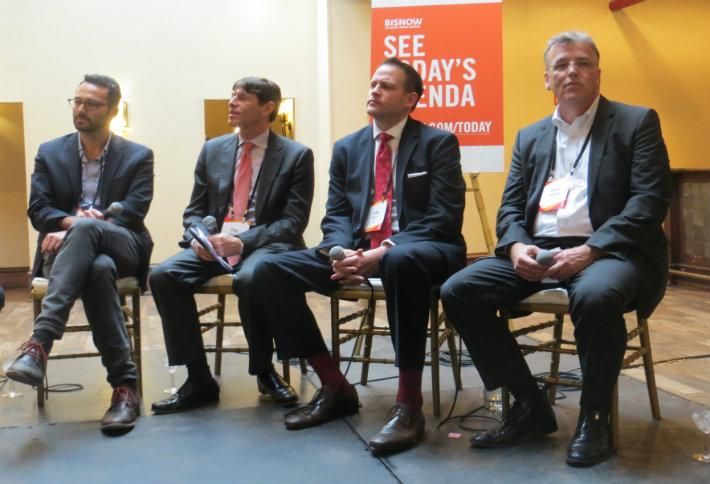 Jamie Hodari, co-CEO of co-working provider Industrious, which just opened its first NYC location in Downtown Brooklyn, says the neighborhood is perfect for his line of business.

“Our asking rents are $145 per SF, and the underlying rent is $35 per SF,” says Jamie (snapped to the left along with Washington Square Partner’s Paul Travis, CPEX’s Sean Kelly and Rose Associates’ James Hedden). “That’s compared to maybe $210 per SF asking in Manhattan with $70 per SF underlying. It’s just shocking.”

Paul says the neighborhood’s rental market has also come into its own in recent years. “For the tenants here, it’s no longer about price,” he says. “If they have a choice between Downtown Brooklyn and the UES, they’re going to pick Downtown Brooklyn.”

James says lenders still push back on large rental projects in the neighborhood, seeing them as leaving developers overexposed, but recently “it’s easier to convince them to look at it in the context of the NYC-wide rental market, not just the Downtown Brooklyn rental market.” 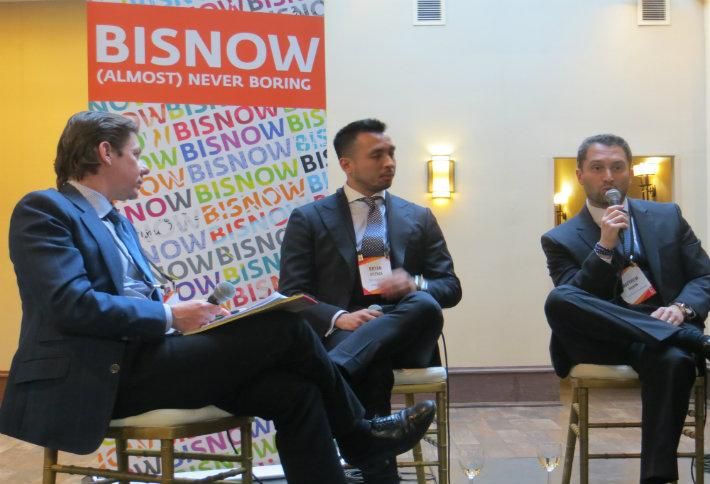 Greenpoint attracts the same sort of hip, young creative types as Dumbo and Downtown Brooklyn, but with a caveat: “They don’t mind walking a few more blocks to the G train, they don’t need to be in the thick of it,” says David Pfeffer, a partner at Tarter Krinsky & Drogin.

Matthew Baron, president of Simon Baron Development (snapped above to the right along with David and Bryan Atienza of Nestseekers) agrees, saying those drawn to Greenpoint don’t want to live in places like Bushwick and Williamsburg, which are often full of “tourists and people vomiting outside of bars.”

“They like peace and quiet, especially if they’re paying a bit less in rent on top of that,” he says.

David Behin, a partner at MNS (snapped above to the right along with Cayuga Capital Management’s Jamie Wiseman) says Greenpoint’s lack of transportation options and quiet, suburban appeal will make the neighborhood more self-contained when current projects like Greenpoint Landing ultimately come online.

“There’s a tidal wave of construction on the waterfront right now,” he says. When that’s finished, the neighborhood will have a solid stock of residential and retail space, and he notes that office stock is springing up nearby as well.

“When all is said and done you’ll be able to live, work and play in Greenpoint to a degree that’s not really feasible in a lot of other neighborhoods,” he says.