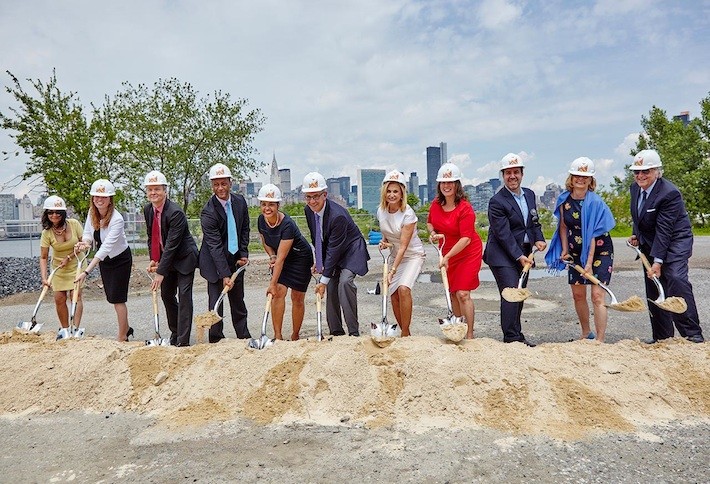 Developer Marian Klein of Greenpoint Landing Associates this morning presided over the groundbreaking of 21 Commercial Street, the first building to rise as part of the sprawling, controversial Greenpoint Landing project in northernmost Brooklyn.

Marian, along with representatives from L+M Development Partners and an alphabet soup of city agencies, announced that roughly 300 units of affordable housing spread across Greenpoint Landing's three-building first phase will arrive as "early as next year." Marion said the Handel Architects-designed trio would "reflect the beauty and heritage" of the neighborhood, a former industrial center.

But the central theme of the morning was Marian (and her father, George's) commitment to affordable housing, which will help make 1,400 of Greenpoint Landing's 5,500 total units available to residents of modest means.

City Council member Steven Levin, who two years ago cast the deciding vote on a contentious high-rise element of Greenpoint Landing, noted a "turning point and cornerstone" for the project and singled out Marian and George, an industry vet, as real estate pros of singular "intergrity and decency."

HPD Commissioner Vicki Been spoke in scheduled speaker Alician Glen's stead. Glen was "under the weather" after a "rough few weeks in Albany." Been said the occasion marked the start of "affordable housing in real time" on the site, which will push Mayor Bill de Blasio toward his goal of creating or maintaining 200K affordable units citywide. Despite moments of "discouragement and tension" along the way, the development would soon provide modern housing to families with incomes as low as $23,350.

The 93-unit 21 Commercial Street will be joined in this phase of the development by 5 Blue Slip (103 "deeply affordable" units) and 33 Eagle Street. Additional results include a restored street grid, four acres of public open space along the East River and, perhaps most importantly, a new, "badly needed" school that will seat 640 students.