Bisnow recently got the first media look at the rooftop addition under construction at Empire Stores, the roughly 500k SF office conversion of one of the oldest buildings in Brooklyn. 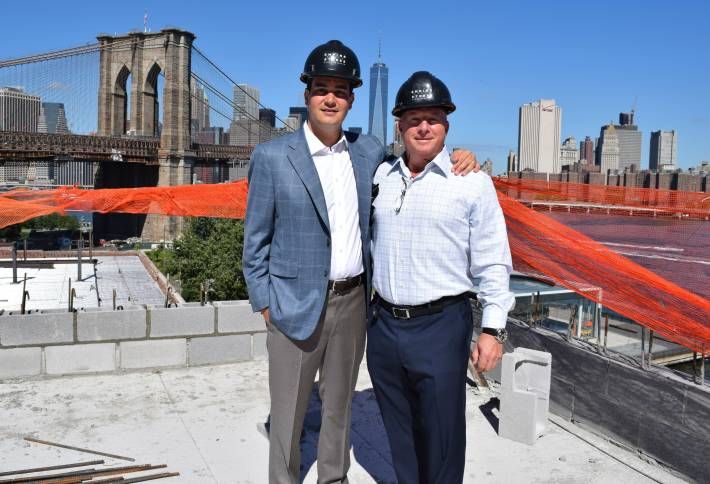 Built in the 1870s, Empire Stores, at 55 Water St, was originally a coffee warehouse that dates to around the same time as the Brooklyn Bridge. Snapped: JLL managing director Howard Hersch with JLL vice chairman Scott Panzer, who head up office leasing for the project. 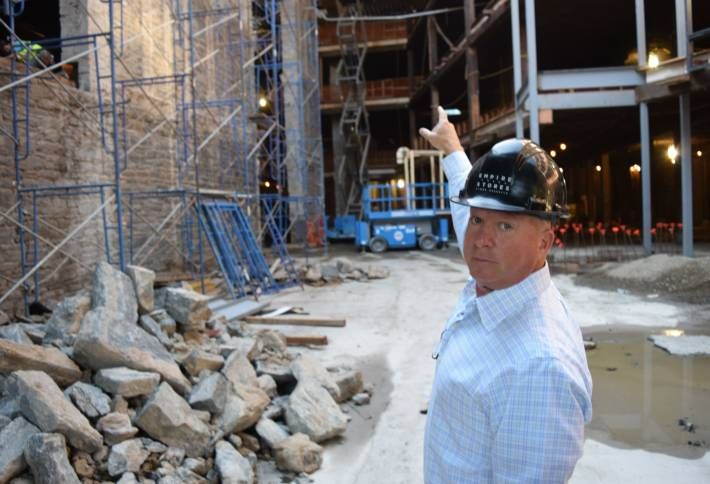 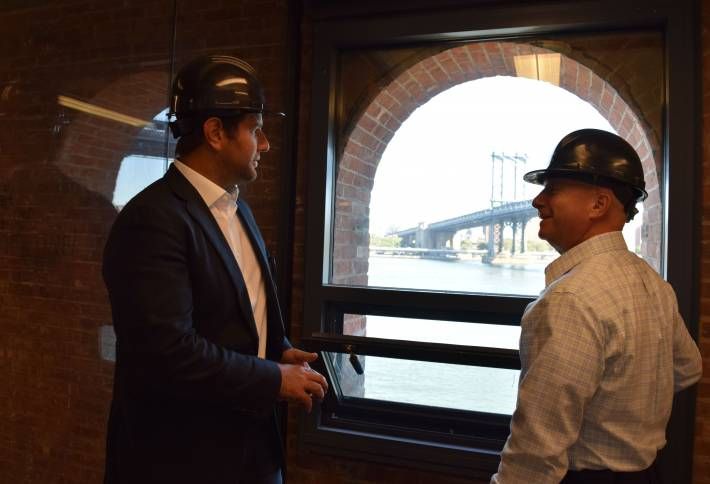 The Building sat abandoned since the 1960s, Midtown Equities principal Michael Cayre (with Scott) tells us. Midtown Equities and JV Partner Rockwood Capital won a bid in 2013 to redevelop it through a 95-year ground lease from the Brooklyn Bridge Park Corp, which owns the land it sits on. 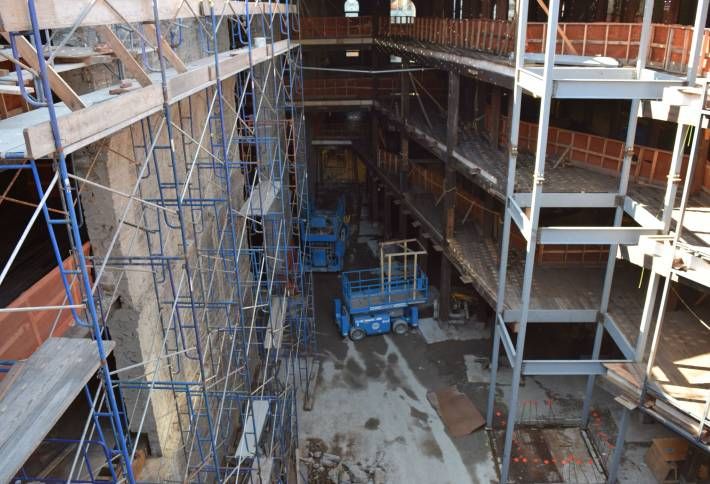 Scott likens the rehab to putting a Ferrari drivetrain into an 1800s horse and buggy. A portion of the rooftop and open-air interior courtyard areas (snapped) will be open to the public and considered part of Brooklyn Bridge Park. 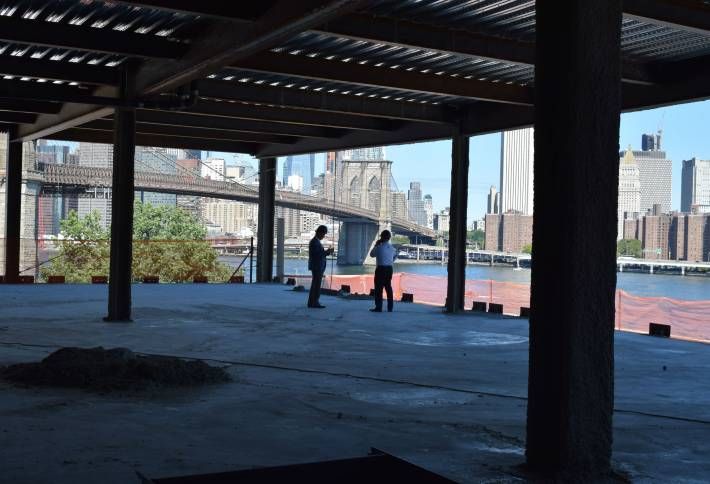 On top of the glass and steel addition (snapped, with Howard and Scott taking in the view) there’ll be green space, which Michael says could include space for produce to serve restaurant tenants in the ground-level retail space. 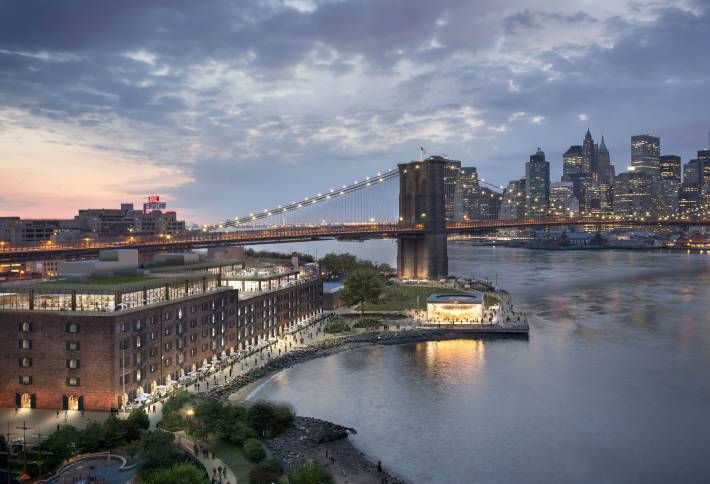 It’s all being done in accordance with the building’s landmark status, with Studio V and Perkins Eastman handling design and construction, respectively. Rendered: the completed project. 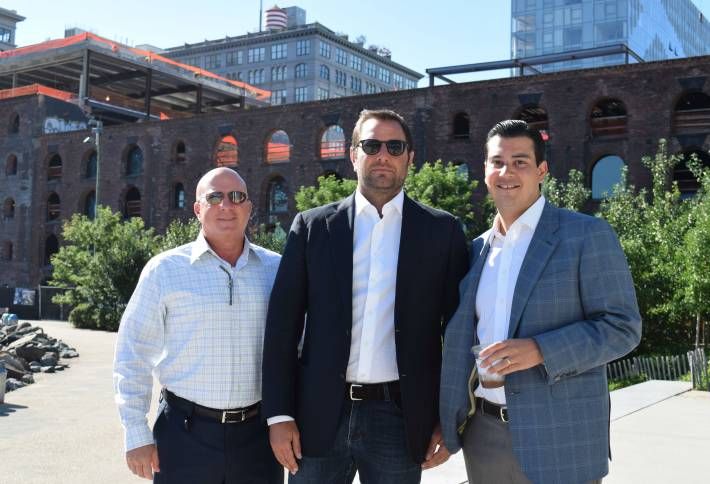 Michael says when the site’s done it’ll function like a waterfront campus. Once it opens next spring, office tenants will be able to walk right into the 85 acres of the park without crossing any streets. Or, if they go the other direction, they’ll step right into Dumbo’s cobblestone street grid lined with restaurants and boutiques. Snapped: Scott, Michael and Howard. 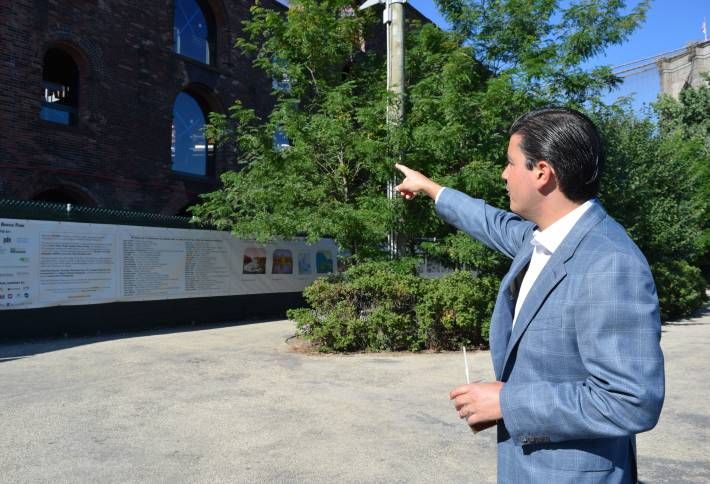 The area’s retail will be bolstered by 55k SF that’ll face the park along a promenade a few feet from the water. Michael’s handling the retail side of the leasing with his brother Jack, also a Midtown Equities principal. Snapped: Howard, in front of the project's future waterfront retail. 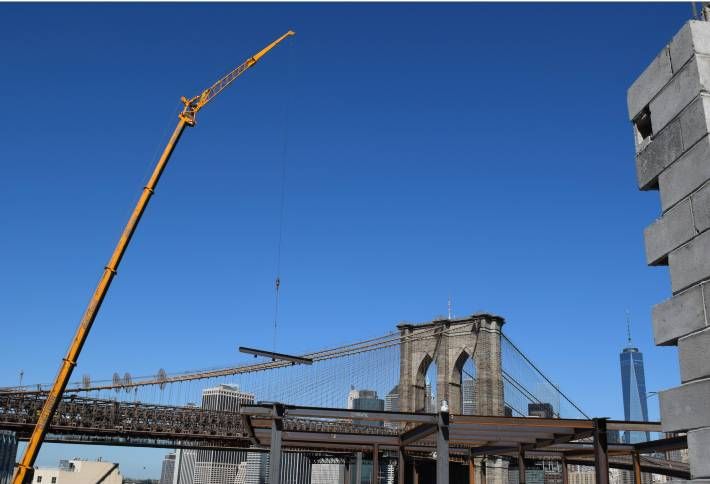 So far, four retail tenants are lined up, including West Elm Market, which is taking around 12k SF. (West Elm’s also signed on as the anchor tenant for the office portion, with 150k SF for its world HQ.) Once all the retail goes on line, Michael says, it’ll give folks one more reason to come to the park, whether or not they work at Empire Stores. 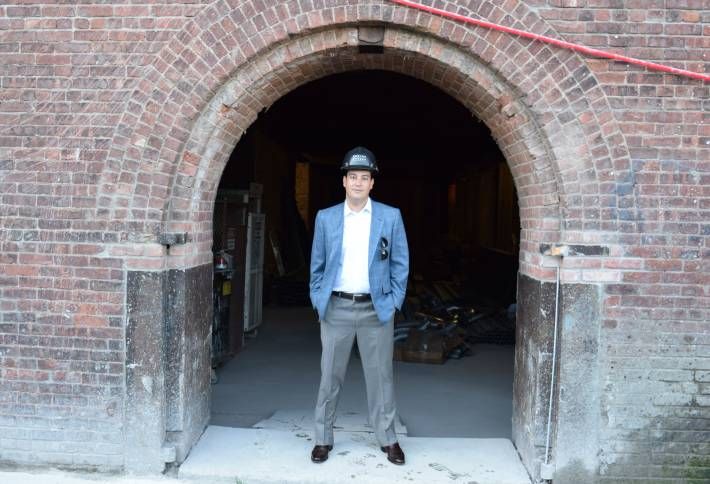 “Office tenants want lifestyle nowadays,” says Howard (snapped). “It’s not just about the four brick walls anymore.” And the developers are betting on that lifestyle coming at a premium. Asking rent for office space in the rooftop addition is $85/SF, and $65/SF in the rest of the building. When asking rents were first announced in 2013, the numbers were a record for Brooklyn, according to The Real Deal. 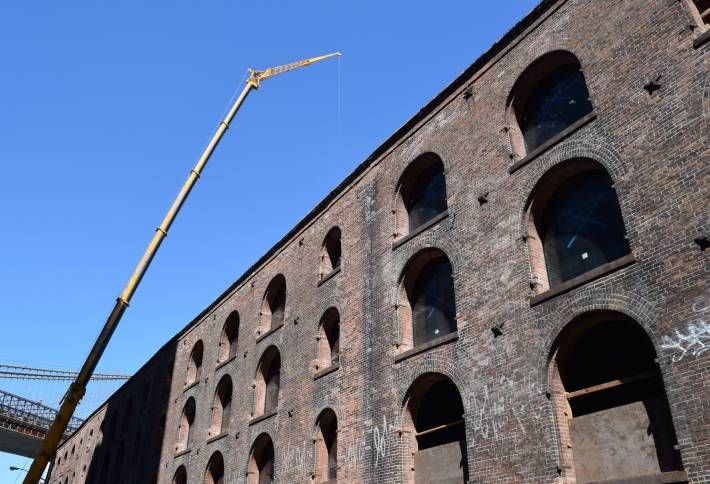 But Howard says the location, the quality of the space and the amenities it’ll have both in the building and nearby, make it a bargain even at those prices. One reason: the rent isn’t really the rent. That’s because the Relocation and Employment Assistance program, set up by the city to lure businesses into emerging office markets, gives a tax benefit of $3k per employee per year for 12 years. Howard says he crunched the numbers and it’ll amount to the equivalent of a $15/SF break on rent at 200 SF per employee, a pretty generous density for the sorts of creative office tenants the project’s looking to lease. 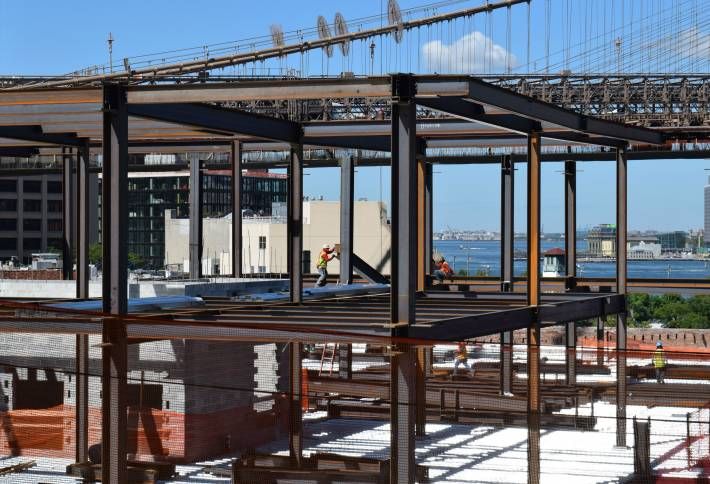 According to Michael, they’re not just looking for any old tenants with good credit and a healthy balance sheet. He says the office leasing team has turned some tenants down because they just didn’t fit the mix that he says will make the whole thing work. Howard tells us there are three tenants with names folks will know who are in talks to move to the building from Manhattan. Snapped: The rooftop addition.