Inside The Supertalls: One Vanderbilt

There are several supertall towers (taller than 984 feet) on the rise in NYC, and we've been researching what it takes to dramatically change NYC's skyline. Now, we’re taking a look at SL Green’s 1,401-foot-tall One Vanderbilt, which broke ground this week.

The 58-floor, 1.6M SF tower has been in the works since the early 2000s, when SL Green was looking at sites in Midtown and buying Terminal City sites. At the time, then-Mayor Michael Bloomberg was planning a redevelopment around the terminal, but the plans were rejected in November 2013 after residents, preservationists and politicians expressed concerns over the influx of workers disrupting the area.

SL Green purchased the site in 2011 for $77M, but the original plans for One Vanderbilt, in which it stood 65 stories tall, weren’t submitted until May 2014.

In 2014, Midtown TDR Ventures’ Andrew Penson—who owned Grand Central Terminal after buying it in 2006 for $80M—offered SL Green $400M for another site adjoining the terminal, which SL Green rejected as a “publicity stunt from an individual with a long history of litigation and obstruction of major projects.”

In March 2015, the City Planning Commission gave the go-ahead to build the mixed-use tower alongside an extensive rezoning of Midtown East. Demolition on the site started soon after, although the process was plagued by several construction injuries.You can find a video of the demolition here.

SL Green filed new plans for the building in October 2015.

Progress stalled when Penson threatened to sue SL Green and the city for a combined $1.5B, asserting that Mayor Bill de Blasio, the City Council and SL Green illegally deprived him of millions of dollars' worth of air rights, and that the rezoning solely served to increase SL Green’s profits. Harvard scholar Laurence Tribe even called the move “unconstitutional."

The case was settled this August, only a month after one of Penson’s partners sold a $63M stake in the terminal to Michael Dell’s MSD Capital.

The building is slated to cost $3B. Speaking at NAREIT’s REITWeek 2016 Investor Forum, SL Green CEO Marc Holliday said leasing shouldn’t be a problem, but nonetheless wanted a partner because a “project of this size does present an element of risk.”

In 2015, SL Green gave $220M toward the building's construction, two-thirds of which was to be used for transit improvements. To date, this is the largest private investment in the subway system.

SL Green closed on $1.5B in construction financing on Sept. 28. With a seven-year term and a 3.5% floating interest rate, the financing came from Wells Fargo, BNY Mellon, JP Morgan Chase, TD Bank, Bank of China and Landesbank Baden-Württemberg, which wasn’t part of the deal when originally secured in June.

Designed by Kohn Pedersen Fox, One Vanderbilt’s façade is intended to integrate Grand Central and incorporate both glass and terra cotta. KPF president James von Klemperer told the New York Times that relating “a 1,400-foot glass building” and a “palatial stone box of a neo-Roman design” would be a challenge, but believed the two shared a bond.

Anchor tenant TD Bank will occupy 200k SF of office and retail, including part of the ground floor, for at least 15 years. The bank will also install ATMs in the underground corridor to Grand Central and have 30 minutes a day for advertisements on 1515 Broadway’s billboard.

There will be a restaurant on the second floor and tenant-only amenities on the third, with 1.6M SF of Class-A office above. At 58 stories, the tower features fewer floors than other towers of its height. Each floor will have ceilings between 14.5 and 20 feet, floor-to-ceiling windows and column-free floor plates.

There will also be a 30k SF "world-class dining" area, a 4,500 SF lobby, a bar 900 feet above ground, an auditorium and a large outdoor terrace. It’s also expected to be LEED V.3 Platinum.

The building’s rise coincides with MTA’s East Side Access project, which will add capacity for 65,000 passengers at Grand Central's subway stop. Planned improvements include an underground connection between the building and the terminal, new mezzanines and exits, three new stairways, a reconfiguration of the Grand Hyatt New York hotel’s supporting columns and a commuter waiting room in the tower’s lobby.

The improvements were mandated by the MTA and are slated to cost $220M. SL Green also can’t lease up the tower’s top floors until the improvements are completed.

While some have criticized KPF’s design, New York Magazine described the tower as a "civic-minded Goliath," designed for easier pedestrian and transit access rather than maximized profit. 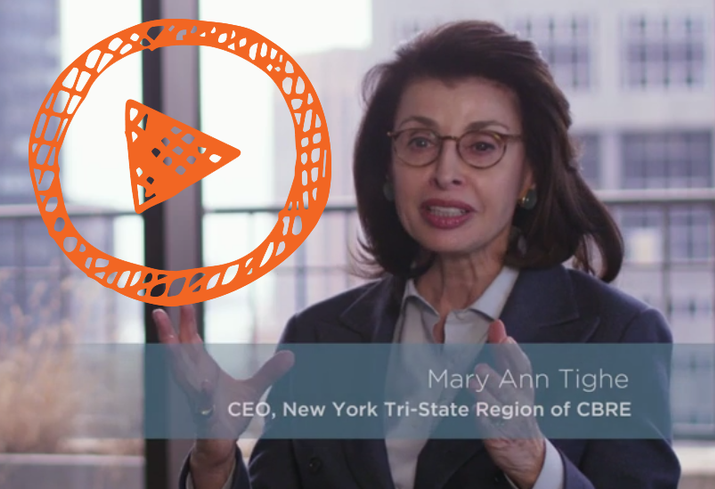 Asking rents haven’t been disclosed, but Steven says they’ll be “in line with the highest quality, marquee buildings in Midtown” like 90 West 57th St, the GM Building and the Seagram Building.

When completed, Herald Square Properties founder and SL Green alumnus Gerard Nocera told Bisnow, One Vanderbilt "will have a positive ripple effect on the entire Midtown market” and "will accent the age of the surrounding buildings and the need for further development.”

The tower’s expected to bring the city $49.7M in annual real estate taxes, six times the $7.9M it originally produced.