How Innovation And Technology Are Affecting Buildings And Their Users

Technology is affecting buildings and the people who occupy them worldwide, and attendees at Bisnow's San Diegeo Future of Real Estate event last week got to hear about how from Realcomm founder Jim Young, who has been following the intersection of technology and real estate for 25 years.

Jim (pictured far right with Jim Palmer and Rob Davis) said at the start of the Internet Age “the idea was that as we got more digital, more would happen in the cloud and things would change, and it did—Blockbuster was replaced by Netflix; Kodak by Facebook, Instagram or Snapchat; Borders by Amazon; and Virgin Records by Spotify.

In 1984, Jim wrote an article predicting these things and that computers and phones would change the way people use space, but he didn’t anticipate the advent of WiFi, which allows people to work in any space, nor did he anticipate Millennials’ 24-7 relationship with mobile devices.

He said the bottom line is driven by innovation, which comes in three categories: Next-Gen spaces that provide new human experiences, from med-tech in bathrooms to new amenities and flex space in corporate spaces; smart buildings and campuses, where everything is connected to the same network; and information management.

Discussing how information management is changing how we do things, Jim noted he is working with a real estate brokerage that wants to take the entire real estate transaction experience online.

In smart buildings, all systems will eventually be on one network, with sensors controlling lights, room temperature, fresh air and more by detecting the number of people in the room and adjusting systems accordingly. While in Tokyo, Jim saw a lamp plugged in that showed up on a computer monitor. “That changed my whole trajectory,” he said. “ I realized everything one day will be connected."

Jim mentioned a variety of ways next-gen technology is being put to use as science fiction becomes reality.

San Diego is a test site for low-voltage lights, which “is coming to a building near you,” he said. Lots of things will become low-voltage over the next five years. Next-Gen solar, or concentrated solar, which uses mirrors or lenses to concentrate a large area of sunlight onto a small area, will increase alternative energy production.

Drones are being used for a growing number of new applications, including roof inspections and energy audits, and robots are parking cars, Jim added. The first robotic parking garage was in Singapore, but the first one in the US recently opened in Oakland. Within 10 to 15 years most people will be using autonomous cars to some extent. Jim said The Irvine Co plans for The Ranch in Irvine to rely on them for transportation.

Virtual reality will become commonplace in the real estate industry, with prospective tenants donning goggles to envision the build-out in an empty space. This is already happening, Jim said. Magic mirrors will replace dressing rooms in high-end clothing stores, with patrons sliding clothing onto an image of their bodies, rather than actually trying clothes on.

People’s shorts, hats, sneakers, watches and bracelets will put sensors all over their bodies, providing a better picture of health status than going to the doctor. “If I can get better health information delivered to my cellphone 24-7, why would I visit a doctor?” he asked. Telemedicine technology is changing the delivery of healthcare. Urinals will tell you when you’re catching a cold or to stop drinking, Jim continued. San Diego’s J. Craig Venter, who mapped the human genome, is working on technology that would increase the human lifespan to between 125 and 150 years, Jim noted.

In the future, people might shallow a pill that contains passwords for bank accounts, which would be activated by stomach acids. At the ATM, it would read your password through you skin, he said. A former DARPA (Defense Advanced Research Project Agency) scientist who now works for Google is working on an implanted wrist chip where you could swipe your wrist to pay.

He anticipates huge changes in the next five years. 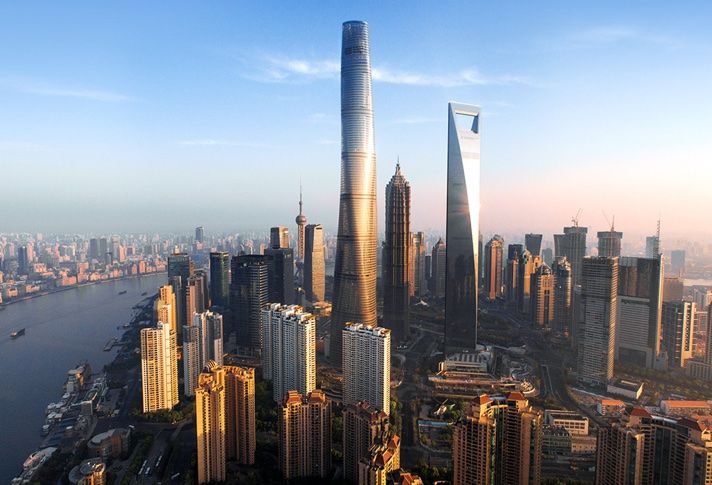 In 2004 Jim visited two or three state-of-the-art buildings in each of seven major US cities and 32 projects in seven cities worldwide and presented a global perspective on how technology is being applied around the world. Developing Asian and Middle Eastern nations have adopted technology quickly, he said, and they are using it in innovative ways Americans have not yet imagined.

While he places Toronto in the first or second position for innovation worldwide, Jim said Singapore is the third, with some building innovations that you won’t see anywhere else in the world. Other amazingly innovative cities visited were Dubai; Tokyo; Hong Kong; Abu Dhabi and Yas Island; Kuala, Lumpur; and two cities outside Seoul, Digital Media City and Jongno Gu.

Some of the most surprising technologies included the 120-story Shanghai Tower (pictured)—the second-tallest building in the world — with best-of-class information and communications systems and LED lighting throughout. There's also a high-speed train in Shanghai that moves people from the airport to downtown in seven minutes, compared to an hour by car, and a 57-story building in China built from the ground up in 19 days. Jim said both Saudi Arabia and China plan to build a mile-high building, but the Chinese contend they can do it in three months.

One of his traveling companions returned to San Diego determined to create digital signage throughout Downtown, but the city's building department told him he had to put the signs inside the building, behind glass and it could be no more than 18 inches high. Jim said amazing technological innovation is happening in these foreign cities because they have willingness and will take a risk. If real estate professionals want to see progress in building technologies in San Diego, they will have to convince city officials to be more open to innovation.