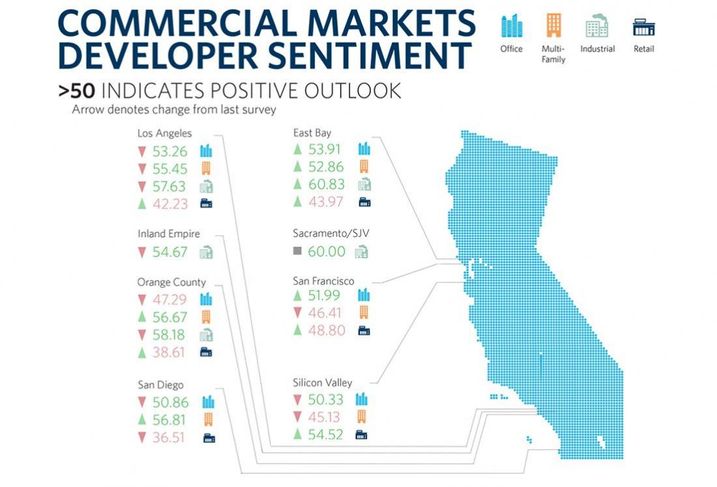 Multifamily and industrial are hot in California while retail has stagnated, and office has reached the top of the cycle. These are the latest findings from the Summer/Fall 2018 Allen Matkins/UCLA Anderson Forecast California Commercial Real Estate Survey.

The biannual survey of developers and owners forecasts potential opportunities and challenges in CRE sectors across California’s major metros.

Check out the latest results below:

California’s office markets have topped out, but not dropped out, according to the survey. Development will continue, but the influx of new development that various markets have experienced in recent years won’t be repeated in the next three years. Those surveyed said they don’t have plans to increase or decrease activity in the coming year.

A slight decrease in building is expected in the Bay Area over the next three years. Two-thirds of panelists in Southern California markets said they don’t plan to develop office projects in the coming year due to rising cap rates and other factors.

“People are continuing to develop what they previously bought, but there doesn’t seem to be a ton of new development acquisition deals on the horizon,” Allen Matkins partner Crystal Lofing said in the report.

While office will be steady for the next three years, industrial is heating up.

The survey now includes San Joaquin and Sacramento counties, which are among the fastest growing in the state for industrial due to their access to rail service from the ports at Oakland and Stockton and three cargo-intensive airports.

Low vacancy rates and increased freight movement have panelists optimistic about the East Bay and San Joaquin and Sacramento counties for the next three years. Increased development is expected across these regions by 2021.

Optimism also is strong in Southern California. Very low vacancy rates have been driving development for new projects in Los Angeles, Orange County and the Inland Empire. Demand for industrial continues to be influenced by an increase in imports and online shopping, but could be disrupted by future trade wars.

Retail remains the weakest perceived sector in the recent survey and sentiment among respondents remains the same or lower in five of the six markets compared to previous surveys.

Silicon Valley is proving to be an exception and respondents were slightly optimistic about retail in the Valley over the next three years. The report suggests an increase in disposable income is helping drive retail sales in this region. Payroll employment increased in Silicon Valley by about 3.5% in the last 12 months, which is twice as much as the U.S. rate.

Outside of Silicon Valley, retail remains tough. Two-thirds of panelists said their spaces are filled with questionable leases and they are not planning to increase any retail projects over the next year. The report suggests a decline in retail building and a softening of the market through 2021.

“Experiential retail is up, but experiential retail takes a lot of effort,” Allen Matkins partner Pete Roth said in the report. “You have to have the right kind of mix and it’s a challenge, and so repurposing existing retail to fit the new model can be difficult.”

Even though respondents predict a softening of the multifamily market, about 80% of Bay Area respondents said they plan to start at least one multifamily project this year, compared to 63% from last year’s survey. Any softening would be short-lived, especially as long-term demand and conditions continue to warrant new construction.

In Southern California, about 75% of respondents said they are planning new projects, an 11% increase compared to last year’s survey. Panelists expect rental rates to rise faster than inflation, while occupancy rates will remain high through 2021.

“Multifamily is so hot right now because there’s a huge demand for housing coupled with the new tax plan, which incentivizes multifamily use over single-family ownership,” Allen Matkins partner Steve Etheredge said in the report.