Los Angeles' Arts District has been on the rise, drawing in new development and becoming a vibrant place to live and work. But unless transportation and parking issues are resolved, the district faces distinct challenges to how it grows.

More than 180 people attended Bisnow’s the Evolution of the Arts District event Tuesday at the JW Marriott LA Live.

Steinberg Architects principal Simon Ha urged the standing-room-only crowd of real estate developers and professionals to contact the head of the Los Angeles Metro to set up a rail station in the growing Arts District area of Los Angeles.

“I think it’s really important for all of us to be activists,” Ha said.

Once the city’s area for producing agriculture in the late 1800s and early 1900s, and later an industrial center during World War II, the Arts District received its name in the 1970s when artists began to move in and transform abandoned factories and warehouses into live-work art studios, DLA Piper partner Jerry Neuman said.

Over the past 15 years or so, the Arts District and surrounding areas have seen a resurgence attracting businesses, artists and residents and a new generation of real estate developers offering adaptive reuse projects.

Last year, Warner Music, one of the largest recording companies in the world, announced it would relocate from Burbank to the Ford Factory in the Arts District.

Shoe giant Adidas has made plans to open a 30K SF office at The Row, adjacent to the Arts District, in 2018.

But as the area continues to get built out with a slew of projects, there are lingering issues that prevent the Arts District from becoming a viable live-work-play destination, several panelists said.

High land and construction costs may stunt development. Parking is at a premium — sidewalks are packed with rows of cars and parking at a lot costs anywhere from $4 to $12 just to visit the area.

Retail is lacking, too. And mass transportation into the area took a blow when Metro CEO Phil Washington last month told a crowd during a business luncheon that there is no money to add a rail station in the Arts District.

“We don’t argue that a station would be a good idea in the Arts District,” Washington said, according Downtown LA News. “The question is, how do you pay for it? Because it’s not in anybody’s budget.”

“So unless manna falls from heaven, that’s the challenge that we have,” Washington said.

With all the jobs and residents coming into the area in the next couple of years, Ha said Washington’s remark is extremely short-sighted.

Lion Real Estate Group co-founder Jeff Weller said he would like to see more parking lots, a grocery store and a mix of mid- to high-end restaurants in the area. But another issue could be convincing residents that it is a good idea for those businesses to set up shop.

“You have people down there who are against having a CVS or certain things,” Weller said. “I get it. But we’re going to need those things to build a community.”

Despite the challenges, Weller is still bullish on the area. So are many other developers.

“It has the potential to be the most exciting neighborhood in all of Los Angeles,” Blatteis & Schnur partner Sam Brownell, whose company is developing At Mateo in the district, said after the event. “It’ll attracts the widest end of users from all types of residents to cultural institutions, workers and schools.”

Check out more scenes from the event below: 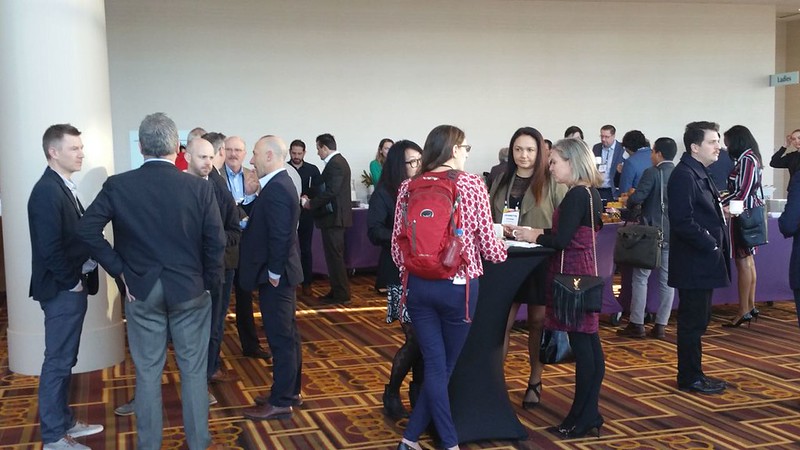