'The Robots Are Coming': Hotels Adjust To New Reality With Some Unusual Tools

When the Hôtel Monville in Montreal opened in 2018, it was one of the first hotels in Canada that offered a truly contactless visitor experience.

Guests at the 269-room hotel could check in via the hotel's app or website or at any of the four check-in kiosks in the lobby of the hotel. If a guest forgot a toothbrush, wanted an extra towel or ordered room service, a 3-foot-tall robot would deliver the item straight to their room. 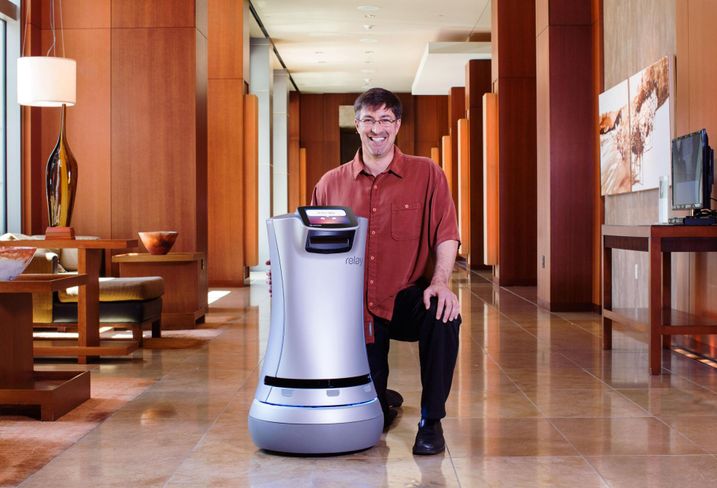 "From the moment you walk into the hotel, we offer a full contactless experience," Hôtel Monville Director of Sales and Marketing Jean-Cédric Callies said. "Guests loved that they could check in [in] 30 to 45 seconds and go straight to their room and get items without interacting with anyone."

In the midst of the coronavirus, reviewers have praised the contactless experience they've encountered at the hotel, Callies said. Hôtel Monville is one of several hoteliers looking into the further use of robots as a way to bring gun-shy visitors back to their hotels.

Having to adhere to new, enhanced, stricter health and cleaning standards, and adjusting to new consumer behaviors toward human-to-human interactions, hotel operators and hospitality experts say they expect to see an acceleration in demand for robots to clean and sanitize rooms and deliver food and drink.

"The robots are coming," NYU Tisch Center of Hospitality Adjunct Professor Max Starkov said. Starkov is also a hospitality industry technology strategist and consultant. "Believe me, the army of robots is coming."

In 2014, Starwood rolled out what are considered to be the first hospitality robots at its hotels, when it placed two robot butlers built by Savioke at its Aloft Hotels in Cupertino. A couple of years later, Hilton teamed up with IBM to create "Connie," stationed at the Hilton McLean in Virginia. Connie, named after Hilton founder Conrad Hilton, is a Watson-enabled robot concierge that could inform guests of nearby restaurants, tourist attractions and hotel amenities.

In Japan, Henn Na Hotel, or "Strange Hotel," made headlines when it opened in 2015 and staffed its workforce with more than 200 robots. Visitors would check in with a robot front desk clerk, have a robot deliver luggage and a robot assistant in rooms. 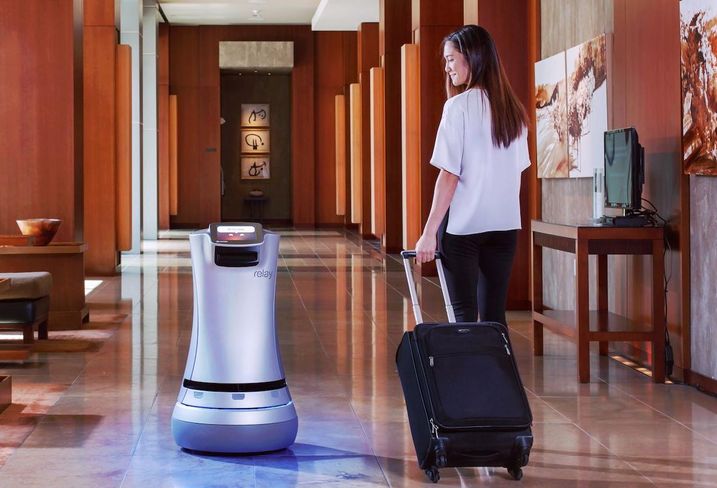 But implementing robots in hotels hasn't been a smooth process. The new technology has had some growing pains and faced opposition from labor unions fearful that a robot invasion could take away jobs. Last year, the Henn Na Hotel let go half of its robots, as customers found many of them both nonfunctional and annoying, according to reports.

When asked about the status of the Connie robot at one of its hotels, a Hilton spokeswoman told Bisnow that "they are not an active part of our strategy at this time."

"We’ll always be a business of people serving people and we don’t have any robot-related standards across our properties," Hilton representative Lana Petruzzo wrote in an email to Bisnow. "These types of devices are both infrequent and more for novelty purposes."

In 2018, Unite Here, one of the largest hotel unions in North America with more than 300,000 members, held strikes at several hotel properties over technological concerns. The union and hotel brands such as Marriott eventually struck a deal that requires hotel employers to give advance notice of new technology to its workers and offer training to staff to use these technologies, according to The New York Times.

Marriott did not reply to a Bisnow request for comment as of press time. Unite Here spokeswoman Meghan Cohorst declined to comment.

Still, the demand or at least inquiries for delivery and cleaning robots are picking up, especially in the midst of the coronavirus crisis, said Starkov, the NYU professor.

"Pre-coronavirus, there were 1 million untaken and unspoken-for jobs in the hospitality industry," Starkov said. "Line cooks, waiters, housekeepers, front desk ... the industry faced low unemployment because there were no takers. This was a huge incentive for hotel owners and managers to automate certain positions. This was all necessitated due to the labor shortage."

Starkov said robots are perfect to fill positions like housekeeping and cleaning because they can do the dirty work that humans don't want to do. Robots are also more efficient. There are some places that have robot bartenders and robots flipping burgers.

"Now with the coronavirus, it's the opposite," Starkov said. "The industry is facing high unemployment and owners are finding ways to cut labor costs, which typically consume 40% to 50% cost of the hotel, until demand picks up." 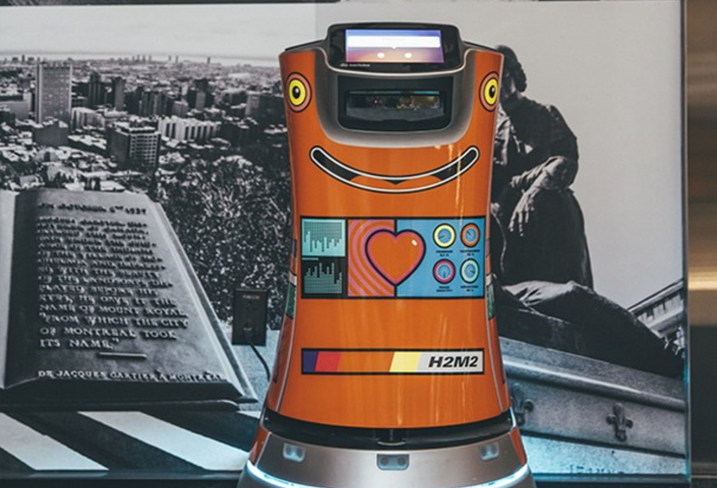 Savioke Head of Sales and Marketing Bill Booth said since the pandemic began in March, inquiries for the company's delivery robot, Relay, has doubled.

Relay is a cylindrical shaped autonomous robot. The top is able to open and close with the push of a button. Relay, which is pre-programmed with the property's layout, is deployed once a hotel guest calls the front desk asking for items like toothbrushes, towels or bottled water.

The employee places the item inside Relay and the robot heads to the guest’s room. The robot has a built-in low res camera (to protect guest privacy) and sensors to navigate its path, knows how to use the elevator and moves around certain obstacles such as people and luggage carts. Once Relay arrives in front of the room, it makes a robotic phone call announcing its arrival to the guest's room. The guest is then able to retrieve the item by pushing a passcode or button.

Savioke has more than 100 Relay robots installed worldwide. About 80% are in hotels, and the rest are in hospitals or healthcare facilities such as in pharmacies, nursing stations or patient rooms. Booth said that when the pandemic began to shut down nonessential businesses and travel, he was initially concerned about the status of the company's robot business and its hospitality clients, who were severely impacted by the California governor's stay-at-home orders and the sudden drop in tourism.

But at the same time, Savioke began fielding calls from a new set of possible clients: office owners and high-rise residential building managers. Hospitals and hotels that were being used to quarantine patients and staff also began reaching out for more delivery service robots.

Booth did not disclose the cost of Relay, but in a previous story, another Savioke spokesman said renting Relay costs more than $2K a month.

"In this COVID world, everyone wants to make sure their tenants and patients are safe and secure," Booth said. Booth said office landlords told him they want to use Relay as an amenity to have packages, food or other items delivered to them within the office property.

"Every office has a cafeteria," Booth said. "Rather than have people come downstairs and eat, Relay could deliver the food right to their office. Same goes for high-rise residential places. It's been a roller coaster."

Booth said Relay is not here to take away people's jobs, adding that it enhances workers' productivity and gives hotel guests a better hospitality experience. 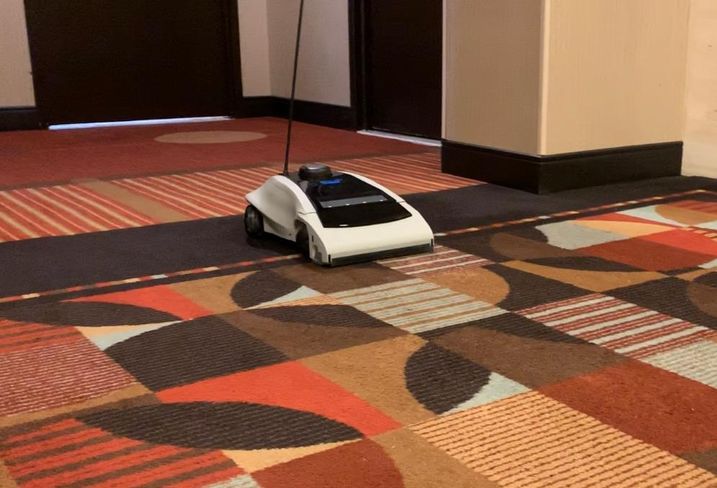 Austin, Texas-based Maidbot CEO and founder Micah Green said he has also seen an increase in inquiries since the pandemic began. Maidbot specializes in the development of an industrial and commercial strength dry vacuum cleaning robot called Rosie. His robots are mostly deployed in hotels in Texas and Colorado.

"We’ve seen a lot of demand and we're looking to expand into wet cleaning and sanitization instead of just dry vacuum cleaning," Green said.

"The standard of cleaning has gone up," Green said. "There are more touchpoints, more areas that require room attendants to clean. It's going to take more time to clean."

Green said with all of the now-required cleaning and sanitization, companies are also making a big push to reduce operating expenses and minimize overtime that might be needed from staff or third-party contractors.

For example, with Rosie, a housekeeper can focus on wiping down tables and other surfaces, while the robot focuses on vacuuming the room. He said with the robot, the time spent for a housekeeper cleaning a room is halved. Green did not disclose the cost of a Rosie robot.

RAR Hospitality CEO Robert Rauch has a Relay robot servicing one of his Fairfield Inn and Suites by Marriott in San Marcos. He said he recently re-signed his lease to continue having the robot at the hotel for another three years. Hubert, or Huey, the name of the robot, goes on about 20 trips a day and has helped the company increase the sale of its sundries. 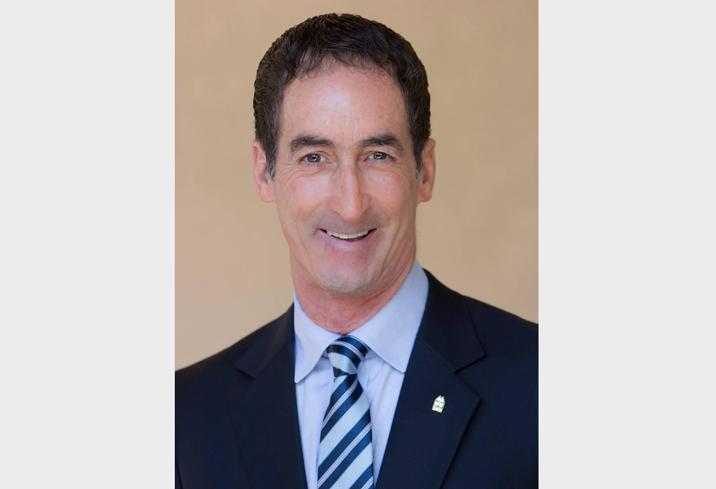 Rauch said Huey has made his workers work more efficiently, productively and safely. Huey works best delivering items at night and it allows the front desk staff to remain at the front desk instead of leaving to bring items to a guest's room, he said.

"Guests love it because you don't have to tip a robot," he said. "And after retrieving the item, if the guest gives it a five-star review, it lights up and does a little side-to-side dance. Actually, it's more of a shimmy."

Mostly, though, Huey has been great for PR. When the robot first made an appearance at the hotel in 2017, the local media picked it up and gave the hotel great free publicity, he said.

"The employees love it," he said. "The guests love it. It's not a big moneymaker. We're about breaking even with the cost of the lease but it also gives us a layer of security because it navigates hallways and alerts management and Savioke of any issues and it lets us know if there are any problems with the hotel's WiFi. It may get flustered."

Rauch said with the coronavirus, Huey is wiped down after every trip. He is now exploring getting another robot that cleans and disinfects rooms and other surfaces in the hotel. Once a hotel is notified that a guest may have tested positive for the coronavirus, that room is automatically shut down for three days, Rauch said, adding that the cost of sanitization has increased.

"I think robotics are in the very beginning," Rauch said. "Technology is getting more advanced. Eventually, robots will talk and play music. Hubert can't tell jokes. When Hubert talks, that will be the next level."

For Callies, of the Hôtel Monville, his Relay robot, named H2M2 after R2D2 in the Star Wars franchise, has also been a great PR move. During Easter and Christmas, the staff fills the robot's lid with chocolate eggs or small gifts and it goes around the lobby for guests to pick them up.

And during the current crisis, H2M2 reassures guests that they can limit interaction with other humans and staff, Callies said. It gives the hotel a competitive advantage, he added.

"It is a huge value-add experience for the hotel," Callies said. "We do have staff, but if people don't feel comfortable, we're not imposing any additional service if they don't want to. [The robot] has been a selling tool. When the clients book with us, it's because of our enhanced safety procedures and contactless experience."

Callies said once hotel demand picks up, he expects people to remain cautious of common areas and weary of interacting with other people and stay longer in their rooms more, meaning more contactless service. He said he is exploring getting a second robot to meet that demand.