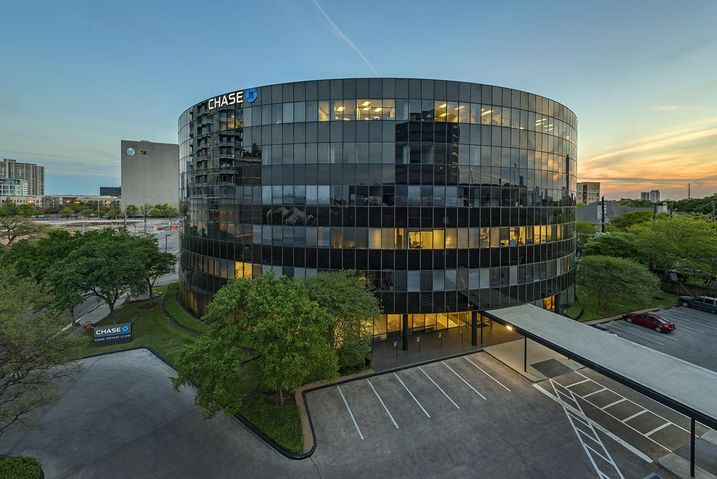 The 137K SF building sits on a 2.8-acre site at the corner of Weslayan and West Alabama. The recently renovated property is 81.9% leased.

“Location was the key driver for us, and the tenancy of the building,” Griffin Partners Investment Management President Andrew Montgomery told Bisnow.

“We really believe in the overall urban infill environment of Houston, and in particular, in that location, with the rooftops and the neighborhoods in the area.”

Major tenants in the building include JP Morgan and accounting firm Blazek & Vetterling. Montgomery said the larger tenants are leasing between 7K and 15K SF, while various other smaller tenants were occupying 2K to 5K SF.

Renovations were recently completed on various aspects of the building. The lobby area was renovated in 2016, while restrooms were completed during 2017-18. Montgomery said the seller, Madison Marquette, spent over $3M to renovate and improve the tenant experience.

Those renovations took the boutique building from Class-B to B+, according to the company.

While Griffin Partners does not have immediate plans to alter the property, Montgomery said the firm intends to have discussions with the tenants about what they would like to see improved.

A number of new infill developments are underway in the same area as 2900 Weslayan. Construction has begun on Trammell Crow’s Alexan Lynn Park multifamily project at 3015 Weslayan.

In addition, Spear Street Capital’s 17-acre property on the corner of Buffalo Speedway and West Alabama is being developed into The RO, a mixed-use development with office space, multifamily housing, retail and hotel rooms.

“We love the ongoing, as well as the future, possibilities for that corner as a live-work-play area. It’s highly walkable and easily accessible for the various amenities around the area,” Montgomery said.

Madison Marquette’s Wade Bowlin and Angelina Stone have been retained to lease the property for Griffin Partners.