Do we have the best port in North America? Colliers International thinks so, once again recognizing the Port of Houston in its annual North American Port Awards. 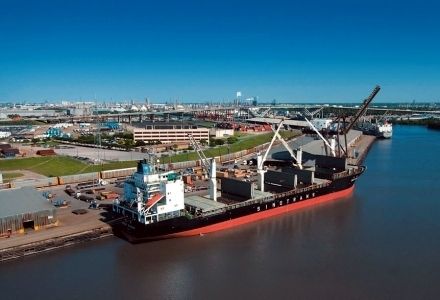 This year, Colliers named us the GDP (Gulf's Darn Profitable) Port. In July alone, the Port of Houston generated $21M, up 7% over July 2012. The port's bulk exports rose 20% in the first half of 2013, bulk commodities increased over 15%, and container tonnage is up 8% year over year. (Our New Year's resolution was to shed some container tonnage, but maybe we'll reconsider.)

Another big number: Net income rose by an impressive 47% year over year. Colliers had previously named the Port of Houston the Most Irreplaceable Port on the continent. But are we doing everything we can to prepare for the expansion of the Panama Canal? The report says we're sixth in the country for post-Panamax readiness, but we're fourth for capex spending. The Port spent $220M in 2013, and that's rising to $300M next year as it gets Super-PPMX gantry cranes. And we might have an edge over competition in handling dual-fuel container ships because of our natural gas supplies and existing backbone infrastructure. (Colliers calls this a "sleeper issue" that will become a big deal in the next 12 to 24 months.)

Simona Furini joined Abel Design Group as a principal. She has 20 years of experience in architecture and interior design and will oversee the firm's interiors department.

B3Ci, a JV of Balfour Beatty and 3Ci, was awarded the contract for three Houston high schools valued at $90M. Projects include a new two-story classroom wing at Worthing High School, construction of a new Law Enforcement and Criminal Justice High School, and a new North Forest High School. Worthing will break ground first and will accommodate 1,300 students. Molina Walker Architects is handling design; construction will complete in 2014. The Law Enforcement school will be 150k SF and house 1,100 students. Page (as PageSoutherlandPage is now known) is designing it, breaking ground this summer. North Forest will house 1,500 students in 200k SF. It's also designed by Page and will begin this spring. The B3Ci JV was created to offer broader opportunities for Minority/Women Business Enterprises.

Chamberlin Roofing & Waterproofing received the Excellence in Construction Award from the Associated Builders and Contractors. Above, Chamberlin's Marty Hensley, Miguel Pecina, Juan Palacio, Abel Flores, and Shane Hubbard accept the trophy. The firm was recognized for its work on One and Two Shell Plaza.

TDIndustries earned the 2013 ICE Award for Excellence in Mechanical Construction from the Associated Builders & Contractors for its work on the Scott & White Hospital complex in College Station. It was also given a Best of Houston award.