Sky-high vacancy rates plague many suburban office submarkets, and with blue-chip companies like McDonald’s and Motorola Solutions recently abandoning the burbs in favor of new digs in Chicago’s Central Business District, their future sometimes seems cloudy. But economic development officials say suburbs can thrive even as the sprawling corporate campuses of the past empty out. In the future, towns that foster a vibrant street life, one similar to the variety found in urban cores, will hold onto remaining companies, and start snagging new office users.

Earthshaking changes to the suburban office market are nothing new, experts say, and didn’t start with the exit of McDonald’s and others. The key to overcoming these shocks is long-range planning. 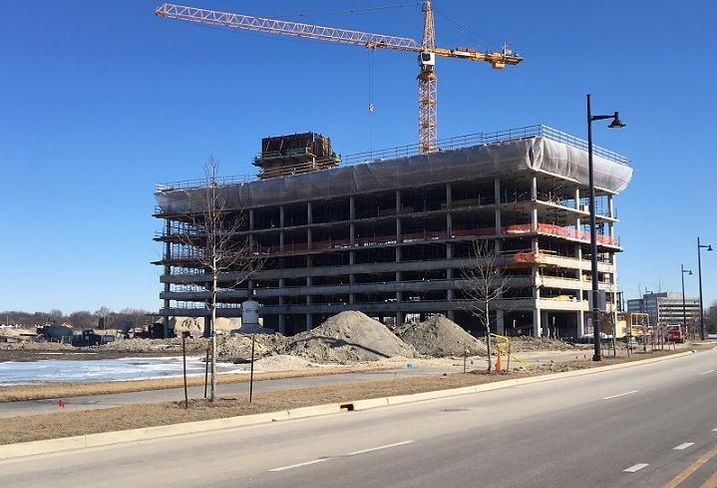 Courtesy of Village of Schaumburg
The Boler Co.'s new headquarters in Schaumburg, Ill.

“In the early '80s we had 20% interest rates, then the tech overreach of the 2000s, and then in 2008 the financial crash,” Naperville Development Partnership President Christine Jeffries said. “Every decade there is a new challenge, and what matters is how you recover.”

Architects, developers, investors and others will gather to discuss how the suburbs meet such challenges at Bisnow’s Future of Chicago Suburbs event in Rosemont on April 2.

In the 1990s, Naperville was famous as the home of Lucent Technologies, a darling of investors throughout much of the decade. When the telecom bubble burst in 2000, the company declined and was absorbed by Nokia, leaving Naperville with a lot of unused office space on the two-building, 175-acre campus, located at 1960 and 2000 Lucent Lane. But the losses taught city officials a lesson, according to Jeffries, and the strategies they adopted are paying dividends today.

“In the '90s, we were too heavily reliant on tech, and after that we made it a point to diversify,” she said.

NDP, a public-private economic development organization that includes the mayor, city council and private industry, began planning a big change around the time of Lucent’s decline, and canvassed local businesses. One clear message came through, Jeffries said. To retain and attract new business, the city needed to spice up its sprawling office corridor, and bring in restaurants, retail, hotels, banquet space and other uses.

“When that area was all zoned for office, everyone there had to travel all the way to downtown Naperville or elsewhere for restaurants, stores and even to find child care,” she said.

Naperville eventually rezoned for mixed-use an area between the Naperville exit off the I-88 Tollway and Diehl Road, just south of the former Lucent complex. Now known as Freedom Commons, the new district began to take shape as the Great Recession ebbed, and is now populated with restaurants, including Maggiano’s Little Italy and Morton’s The Steakhouse, along with new fitness clubs and iFly Indoor Skydiving.

“It’s packed, and the dining is as crowded there on a weekday as downtown Naperville,” Jeffries said. “It really helped us to retain tenants.”

Overall vacancy in the Lisle-Naperville submarket remains high, according to Colliers International. But after increasing from 16% to 20% between 2014 and 2016, it dropped down to 19% at the end of 2019, after seeing 125K SF of positive absorption in Q4. High-quality trophy assets there have a vacancy rate of just 7.1%, the firm found, which compares favorably with the tightest submarkets in Chicago’s CBD.

BMO Harris is set to deepen its Naperville presence. The Chicago-based bank bought 1200 Warrenville Road, a four-story, 330K SF building just north of Freedom Commons in 2011 for $31M, one year after another pair of owners bought it vacant for only $9.4M. The bank now uses it as an operations center, and in December announced it was closing a customer service facility in northwest suburban Buffalo Grove, bringing another 450 employees into 1200 Warrenville Road.

Other bland, 1980s-style Naperville properties have gotten new looks, including OfficeMax’s former headquarters at 263 Shuman Blvd. The 350K SF complex, now called The Shuman, was built for AT&T in 1987, but after Franklin Partners purchased it in 2018, Wright Heerema Architects principal Roger Heerema redesigned it into a multi-tenant building, adding a grand staircase to the main lobby and atrium, a well-lit lower level with a coffee bar, a full fitness club, coworking lounges and other amenities found in Class-A Chicago high-rises. Heerema will speak at the April 2 event.

“They are leasing that space up like crazy,” Jeffries said. “They will have some new announcements coming out in the next few weeks.” 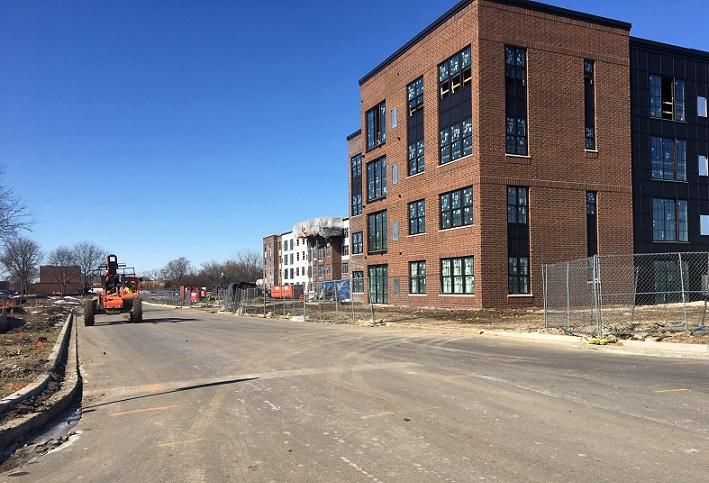 Courtesy of Village of Schaumburg
The Element at Veridian

She also anticipates the former Lucent complex will get repositioned into a mixed-use development, much like the abandoned AT&T campus in Hoffman Estates and McDonald’s landmark campus in Oak Brook. Dallas-based Lincoln Property Co. is set to buy the complex from Nokia, which would consolidate into and lease the 1M SF 2000 Lucent Lane from the new owner, while Lincoln Property would renovate the 613K SF 1960 Lucent Lane building. Another portion of the property could become a residential zone. The Naperville City Council will take a final vote on the plan March 17, Jeffries said.

Municipal officials anticipated Motorola Solutions’ 2015 decision to leave its Schaumburg campus located just north of Interstate 90 for downtown Chicago, and began initial planning several years before, according to Schaumburg Director of Economic Development Matt Frank. The effort yielded blueprints to transform the massive space from single-tenant use to a district called 90 North, one that is already attracting new corporate headquarters, entertainment facilities and residences.

This year will see more of the same, Frank said, as well as the launching of projects that will build on the village’s highly developed retail base and create the kind of density usually associated with urban submarkets. Although construction crews are at work, and leases are getting signed, the change from single-tenant use will take a generation.

“We’re trying to create a community within the village of Schaumburg, but this is more than 300 acres, the size of Chicago’s Loop, so it’s going to be a 10- to 20-year build-out,” Frank said. “It’s not going to change overnight.”

The village already has about 200 restaurants, many scattered around Woodfield Mall, one of the nation’s largest, Frank said, and that means tenants in Schaumburg’s many office towers don’t feel stranded.

“For corporations that want to wine and dine clients, it helps to have all these nice restaurants within a five-minute commute,” he said.

The eventual occupants of the former Motorola campus need similar access to amenities, and with that in mind, the village created the 90 North Tax Increment Financing District in 2014, which helped add roads and other infrastructure to the site as vacant Motorola buildings were demolished. Chicago-based UrbanStreet Group was brought on as 90 North’s master developer, and Frank said it plans to invest up to $500M into the project, now called Veridian.

Village officials also recognized the need to build up the area’s transportation links, he said. They secured a new PACE bus route that in 20 minutes runs from the CTA’s Rosemont Blue Line stop to the Northwest Transportation Center near Woodfield Mall, connecting Schaumburg to downtown Chicago.

A diverse group of users has already begun occupying much of the former Motorola site. A Topgolf entertainment venue opened last year, and other plans nearing completion are The Element at Veridian, a 260-unit apartment building, a 110-unit senior housing community and automotive manufacturer The Boler Co.’s new global headquarters.

The biggest win was Zurich Insurance Group’s decision to build its 784K SF North American headquarters on 40 acres once occupied by Motorola, Frank said. Completed in 2016, the gleaming set of cubes, designed by Goettsch Partners, reminded the business community that Schaumburg was still a growing hub for office users.

“It was a great way to start things off,” Frank said.

The city still plans to create a massive entertainment district to the east of Veridian around the existing Schaumburg Convention Center, and will also take on the development of a new park system on the former Motorola site.

Unlike the green spaces created by the old corporate campuses, which were usually off limits to the surrounding community, Schaumburg envisions an open recreational area more like the lakefront parks of Chicago or New York City’s Central Park, which will host farmers markets and music performances, along with amenities like a sculpture garden, and be fed by more than 8 miles of walking and biking trails.

“We are looking at this as a destination, urban-style park,” Frank said.

Other portions of Veridian will be reserved for still more corporate headquarters. The village is in preliminary discussions with a medical office group for what could become a collection of new office buildings at 90 North, Frank said.

“There is a lot in the works, but a lot more is to come.”