Architect Dirk Lohan may have designed more corporate headquarters than anybody, and he now has the unique opportunity to redesign one of his original creations for a new generation.

The Wight & Co. principal, formerly with Lohan Anderson, designed Hoffman Estates’ Ameritech Center in 1990, an era when suburban corporate campuses were kings of the office market, drawing firms that abandoned the Central Business District. Decades later, the same companies do the opposite, leaving those pristine campuses to immerse themselves back into the hurly-burly of downtown. 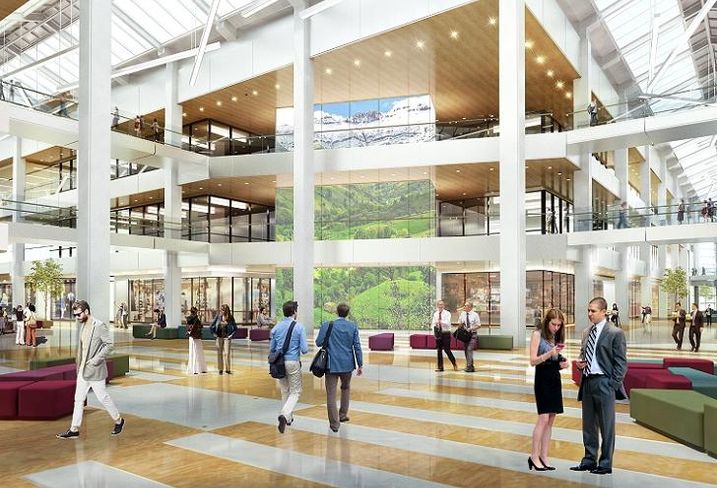 The struggle to remake these now-empty behemoths is what brought the 1.6M SF Ameritech complex, last used by AT&T and vacated in 2016, back to Lohan’s drawing board. The new owner, Somerset Development, retained Wight to help transform the property into Bell Works Chicagoland, a mixed-use complex that will include office, coworking, retail and community spaces.

“I have to admit I never thought, when doing the original design, of the uses we’re now talking about,” Lohan said.

Lohan, who also designed McDonald’s suburban Oak Brook campus, the TRW World Headquarters outside of Cleveland and the Frito-Lay National Headquarters in Plano, Texas, will speak at Bisnow’s Chicago Repositioning & Adaptive Reuse Summit, which will be held Aug. 15 inside Bell Works Chicagoland.

He included many features in the original Ameritech design that make the complex a good candidate for adaptive reuse, qualities few office parks of that era possess.

“I have always liked bringing daylight to people, so we included linear atria with skylights throughout the building, giving the inner offices the same light as offices with windows,” Lohan said.

As a result, instead of antiseptic hallways, Bell Works’ interior has wide, well-lit pedestrian walkways, spaces that can eventually resemble an urban neighborhood.

“We will have sky lit streets, lined with sidewalk cafés and office spaces and perhaps residences just above,” Lohan said. “Many of our cities have areas very desirable to walk through, and that is what we will attempt to recreate.”

It is a tantalizing vision, but the empty white structure was not exactly a hot property when it went up for sale, according to Hoffman Estates Village Manager Jim Norris, who will also speak at the Bisnow event. He and other officials had already kicked around a lot of ideas about how to fill the big hole in their market, and none held much appeal.

Some thought the space could host a public university, and even though that would mean a return of life and activity to the complex, it would also have been tax-exempt, permanently closing off a potential revenue stream.

“Someone even suggested it could become a corrections facility, but that idea was eliminated very quickly,” Norris said.

It seemed like the complex might sit empty and drag down the local market for many years.

“We worried about that from the first day AT&T confirmed they were leaving,” Norris said.

The building was still in the early stages of its revival, but Koplin noticed it already had open cafés and other public spaces hosting several events every week, including farmers markets. Most impressive was the small crowd he saw one day outside the local library, which had opened a branch on-site. 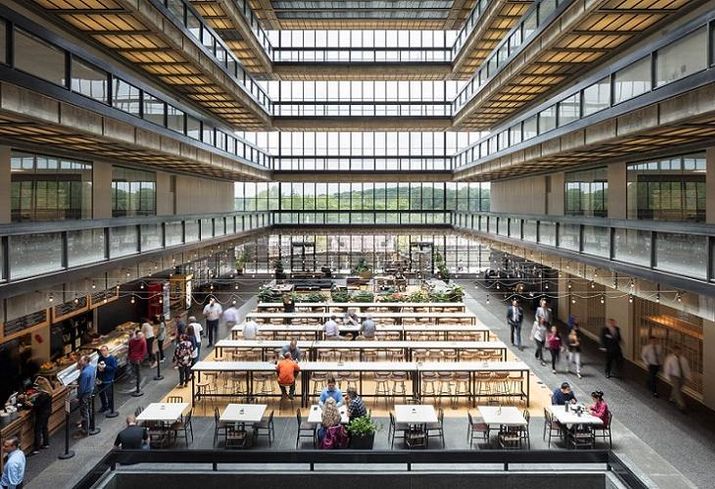 “There were five or six moms with their children, all with their Starbucks coffee, hanging out and waiting for the library to open up,” he said.

The scene was far different from a traditional, sterile office environment, and the city-like feel was exactly what Hoffman Estates officials wanted. Re-creating that atmosphere seemed quite feasible at the vacant AT&T property.

“When the Somerset people came out to visit our building for the first time, they were all struck by the similarities,” Norris said.

The Bell Labs property, designed by noted architect Eero Saarinen, had the same long, central corridors filled with natural light and piazza-type public spaces that Lohan incorporated into his Hoffman Estates design, each perfect for Somerset’s vision. Hoffman Estates officials sweetened the potential deal by promising the company it would create a Tax Increment Financing district for the area.

That gave Somerset enough confidence to place a bid when C-III Asset Management, a Texas-based company that took over the 150-acre AT&T property through a 2017 sheriff's sale, put it on the market, Norris said.

And Somerset may have been the village’s only hope.

“We didn’t know it at the time, but it turned out they were the only one to bid on the property,” Norris said.

Somerset and its partner Triangle Capital Group closed on the acquisition in March 2019, and then unveiled plans to re-create the success of Bell Works, where it has brought in about 70 tenants and leased roughly 90% of the office space. The developer still plans to add a 186-room rooftop hotel to the New Jersey property, a supplement to other features like the library and a Montessori school.

Even though many empty corporate campuses remain scattered across the suburban market, Norris said Somerset’s success shows demand exists for the right kind of buildings. He has seen the office market transform several times, including the rise of suburban complexes as Chicago’s dense urban core flatlined, and that trend’s reversal as millennials rejected suburban lifestyles and flooded back into the city. He also believes it is just about time for another reversal, as millennials age, marry and start families.

“They still want the same kind of vibe they have in the city, but with lower crime rates and better schools, so many are starting to look at the suburbs again,” he said. “And projects like Bell Works Chicagoland is one of the ways the suburbs are going to respond.”

A revived Bell Works will do far more than an indoor shopping mall or amenitized office space, the officials emphasized. Somerset plans to develop 550 residences on-site, for example, giving it a base of roughly 1,300 to 1,400 residents, all of whom can use the shops, attend community events or enjoy nearby biking trails.

“And when you have an office on the third floor, you will also be able to hit a farmers market in one of the piazzas, or attend a CrossFit class in another,” Koplin said. “That’s what will make this completely different. It will be a culture in and of itself where everything happens under one roof.”

“I think the suburbs are ready for a change,” Lohan said.

“And that means a new life for these buildings. I liken them to children who have grown up. When they hit 30 years of age, they become something else, and they want to do something else.”